Sahasra means something in Buddhism, Pali, Hinduism, Sanskrit, Jainism, Prakrit, Hindi. If you want to know the exact meaning, history, etymology or English translation of this term then check out the descriptions on this page. Add your comment or reference to a book if you want to contribute to this summary article. 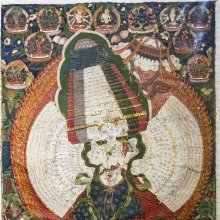 Sāhasra (साहस्र).—The term ‘sāhasra’ literally means “that which has a thousand”. Sāhasra is the same as sahasra the affix ‘aṇ’ having the reflexive-force. Or sāhasra may be explained as that which consists of a sahasra or thousand; the ‘aṇ’ affix having the force of the possessive.

Sahasra (सहस्र) or Sahasrāgama refers to one of the twenty-eight Siddhāntāgama: a classification of the Śaiva division of Śaivāgamas. The Śaivāgamas represent the wisdom that has come down from lord Śiva, received by Pārvatī and accepted by Viṣṇu. The Śaivāgamas are divided into four groups viz. Śaiva, Pāśupata, Soma and Lākula. Śaiva is further divided in to Dakṣiṇa, Vāma and Siddhānta (e.g., sahasra).

Sahasra (सहस्र) refers to a “thousand” (recitations), according to the Guhyasūtra chapter 3.—Accordingly, “[...] [Using the mantra] ‘oṃ namo vāyupathacāriṇe amitagatiparākramāya vimale kulu kulu svāhā’, [and taking] arsenic, gold [and?] a mineral, …, ground up with pig fat/marrow, over which one has recited [the navātman] 1000 times (sahasra-parimantrita), he should smear [the mixture] on his feet/legs, while once again reciting the navātman: he will travel 200 yojanās unwearied!”.

Sahasra (सहस्र) or Sahasraketu refers to “thousand” types of Ketus (i.e., luminous bodies such as comets and meteors), according to the Bṛhatsaṃhitā (chapter 11), an encyclopedic Sanskrit work written by Varāhamihira mainly focusing on the science of ancient Indian astronomy astronomy (Jyotiṣa).—Accordingly, “[...] Thus have been stated briefly 101 Ketus and we will now proceed to state clearly the 1,000 Ketus [i.e., sahasra] already referred to. [...] Thus we have given an account of 1,000 Ketus. We shall now give a few particulars connected with them”.

Sahasra (सहस्र) refers to a “hundred [thousand?] (tales about the marvels of the Śrīparvata mountain)”, according to Bāṇa’s Kādambarī (p. 226).—There are apparently several Tantric rites that Bāṇa pejoratively associates with the priest: [...] “his collection of practices for mastering mantras for invisibility had grown”; “he was acquainted with a hundred (sahasra) tales about the marvels of the Śrīparvata mountain”; “his ear-cavities were punched by those possessed by Piśāca-demons, who had run to him when struck by white mustard seed he had empowered with mantras more than once”.

Sahasra (सहस्र) refers to “thousand” (1000) in various lists of numeral denominations, according to gaṇita (“science of calculation”) and Gaṇita-śāstra, ancient Indian mathematics and astronomy.—We can definitely say that from the very earliest known times, ten has formed the basis of numeration in India. While the Greeks had no terminology for denominations above the myriad (104), and the Romans above the milk (103), the ancient Hindus dealt freely with no less than eighteen denominations [e.g., sahasra]. Cf. Yajurveda-saṃhitā (Vājasanyī) XVII.2;  Taittirīya-saṃhitā IV.40.11, VII.2.20.1; Maitrāyaṇī-saṃhitā II.8.14; Kāṭhaka-saṃhitā XVII.10, XXXIX.6; Anuyogadvāra-sūtra 142; Āryabhaṭīya II.2; Triśatikā R.2-3; Gaṇitasārasaṃgraha I.63-68.

Sahasra (सहस्र, “thousand”) is the fourth of sixty digits (decimal place) in an special enumeration system mentioned by Vasubandhu in his Abhidharmakośa (“treasury of knowledge”). The explanations of the measure of years, eons, and so forth must be comprehended through calculation based on a numerical system. Enumeration begins from one and increases by a factor of ten for each shift in decimal place. The sixtieth number in this series is called “countless”.

Among these decimal positions (e.g., sahasra, “thousand”), the first nine positions from one to one hundred million are called ‘single set enumeration’. From a billion up to, but not including countless is “the enumeration of the great companion” and is called the ‘recurring enumeration’.

[«previous (S) next»] — Sahasra in Jainism glossary
Source: The University of Sydney: A study of the Twelve Reflections

Sahasra (सहस्र) refers to a “thousand (trembling mouths)” (of the snake-lord), according to the 11th century Jñānārṇava, a treatise on Jain Yoga in roughly 2200 Sanskrit verses composed by Śubhacandra.—Accordingly, “On the earth even the lord of the snakes with a thousand trembling mouths (sphurat-vaktra-sahasra) is not able to describe clearly the entire power of the doctrine. Those who have adopted a heterodox doctrine, lacking in [knowledge of the highest] reality, proclaim various doctrines. They are not aware of the reality of things because they are not competent to examine that [doctrine]”.

1) Relating to a thousand.

2) Consisting of a thousand.

3) Bought with a thousand.

-sraḥ An army or detachment consisting of a thousand men.

(-sraḥ) An army or detachment, a thousand strong. n.

(-sraṃ) The aggregate of a thousand. E. sahasra a thousand, and aṇ aff.

Sāhasra (साहस्र).—i. e. sahasra + a, I. adj. 1. Relating or belonging to a thousand. 2. Bought with a thousand. 3. Paid per thousand, as interest, duty. 4. A thousandfold, a thousand times better, [Mānavadharmaśāstra] 2, 85. Ii. m. An army or detachment, a thousand strong. Iii. n. An aggregate of many thousands.

Sāhasra (साहस्र).—[feminine] ī & ā amounting to or consisting of a thousand; [neuter] a thousand.

4) any very large number (in, [Naighaṇṭuka, commented on by Yāska iii, 1] among the bahu-nāmāni; cf. sahasra-kiraṇa etc. below)

6) Sāhasra (साहस्र):—mf(ī, or ā)n. ([from] sahasra) relating or belonging to a thousand, consisting of or bought with or paid for a th°, thousand fold, exceedingly numerous, infinite, [Vājasaneyi-saṃhitā] etc. etc.

7) m. an army or detachment consisting of a th° men, [Horace H. Wilson]

1) [adjective] amounting to one thousand.

2) [adjective] consisting of some large, indefinite number; many; numerous or innumerable.

2) [noun] in a many-digited number, the fourth place from right.

1) [adjective] amounting to one thousand in number.

2) [adjective] too numerous to be counted; very many.

1) [noun] any thing that is made of one thousand members, components, parts, etc.

2) [noun] a division of an army having one thousand soldiers.

3) [noun] a commander of such a division.

4) [noun] name of one of the twenty seven Śaivāgamas.

Search found 45 books and stories containing Sahasra, Sa-hasra, Sāhasra; (plurals include: Sahasras, hasras, Sāhasras). You can also click to the full overview containing English textual excerpts. Below are direct links for the most relevant articles:

IX. The knowledge of death and rebirth (cyutyupapāda-jñānabala) < [Part 2 - The ten powers in particular]

Verse 2.9.85 < [Chapter 9 - The Lord’s Twenty-One Hour Ecstasy and Descriptions of Śrīdhara and Other Devotees’ Characteristics]