Ruru means something in Hinduism, Sanskrit, Buddhism, Pali. If you want to know the exact meaning, history, etymology or English translation of this term then check out the descriptions on this page. Add your comment or reference to a book if you want to contribute to this summary article. 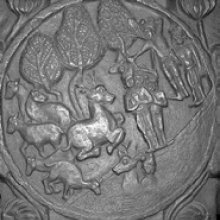 Ruru (रुरु) is a Sanskrit word referring to the animal “deer”. The meat of this animal is part of the māṃsavarga (‘group of flesh’), which is used throughout Ayurvedic literature. The animal Ruru is part of the sub-group named Ānupamṛga, refering to animals “who live in marshy land”. It was classified by Caraka in his Carakasaṃhitā sūtrasthāna (chapter 27), a classical Ayurvedic work. Caraka defined such groups (vargas) based on the dietic properties of the substance.

Ruru (रुरु)—Sanskrit word for the animal “barasingha” (Cervus duvauceli) or “rum” (an animal of the deer species which casts its antlers and wanders roaming about in the forests in autumn). This animal is from the group called Kūlacara (‘shore-dwellers’). Kūlacara itself is a sub-group of the group of animals known as Ānupa (those that frequent marshy places).

The flesh of the Ruru is slightly sweet and leaves an astringent after taste. It is heavy, spermatopoietic and pacifies the Vāyu and Kapham.

Ruru (रुरु) is the name of an asura king who terrorised the gods (devas), according to the Varāhapurāṇa chapter 96. Ruru was eventually defeated by Raudrī who struck him and severed his head (muṇḍa) from his trunk (carma). Raudrī is the form of Trikalā having a black body representing the energy of Maheśvara (Śiva). Trikalā is the name of a Goddess born from the combined looks of Brahmā, Viṣṇu and Maheśvara (Śiva).

Ruru (रुरु).—There was another demon named Ruru who wanted to marry Pārvatī. He did such an unimaginable tapasya that everything started burning. Even Śiva and Pārvatī had to run. Pārvatī told Śiva to do something; Śiva replied that only she had to find a way out. She saw a lion fighting an elephant. She killed the lion and put on its skin as clothing, smeared with its blood and her appearance was terrible. Then she went to Ruru and asked him to stop meditating as he was doing it for her only. Ruru did not believe it and struck her with a mace. Terrible fight ensued. Śaktis started eating up the demons. Ruru fled but Pārvatī pursued him wherever he fled, caught hold of him and tore his head with her nails. Thus he got killed.

Genealogy. Descended from Viṣṇu in the following order: Brahmā-Bhṛgu-Cyavana-Pramati-Ruru. (See full article at Story of Ruru from the Puranic encyclopaedia by Vettam Mani)

2) Ruru (रुरु).—A mighty and valiant Asura. After procuring a boon from Brahmā, Ruru became arrogant and attacked the realm of gods. The Devas who were defeated by Ruru ran to the Blue mountain and prostrated before the goddess Śakti, who had been doing penance there. This goddess Śakti had been born from the matted hair of Śiva.

2) Ruru followed the Devas and reached the Blue mountain. When Devī saw Ruru and his mighty army a loud laugh burst out from her. From that laugh thousands of devilish figures came into existence. They completely annihilated the army of Ruru. After this Devī killed Ruru with the nail of her toe. (Padma Purāṇa, Sṛṣṭi Khaṇḍa).

1d) Some animals, more cruel than serpents give the name of Raurava to a hell. Kravyādas form a subdivision of this class.*

Ruru (रुरु) is a name mentioned in the Mahābhārata (cf. ) and represents one of the many proper names used for people and places. Note: The Mahābhārata (mentioning Ruru) is a Sanskrit epic poem consisting of 100,000 ślokas (metrical verses) and is over 2000 years old.

Ruru (रुरु) is the Sanskrit name of a form of Bhairava. According to the Rudrayāmala, there are eight main forms of Bhairava who control the eight directions of this universe. The term is used throughout Śilpaśāstra literature.

Ruru has the following eight manifestations:

All these have a pure white color; they should be adorned with ornaments set with rubies and should carry an akṣamālā, the aṅkuśa, a pustaka and a vīṇā.

Ruru (रुरु) is the name of a hermit who, while wandering around at will, got married to Priṣaḍvarā (also named Pramadvarā), the daughter of the apsara named Menakā’s, according to the Kathāsaritsāgara, chapter 14. Their story is told by Vasantaka to queen Vāsavadattā after being released from prison.

The Kathāsaritsāgara (‘ocean of streams of story’), mentioning Ruru, is a famous Sanskrit epic story revolving around prince Naravāhanadatta and his quest to become the emperor of the vidyādharas (celestial beings). The work is said to have been an adaptation of Guṇāḍhya’s Bṛhatkathā consisting of 100,000 verses, which in turn is part of a larger work containing 700,000 verses.

1) Ruru (रुरु) is the name of a demon appearing in the nineteenth Kalpa (aeon), according to the Kularatnoddyota (chapter 9).—Accordingly: “There will be one named Ruru, king of the demons and very powerful. You will be on the path (of the world) at the end of the Mahākalpa in order to slay him. O mother of the universe, you who are forgiving and (yet) very fierce, Mahāmāyā and extremely powerful, you will destroy him. Accompanied by Mahābhairava and worshipped by the great host of mothers (mātṛ), you will be united to the one who is the god of all as (your) husband in the eighteenth aeon”.

Ruru was the grandson of the sage Chyavana. He was the son of Pramati and Ghritachi. He was betrothed to a maiden named Pramadvara, who was the daughter of Menaka and the king of the Gandharvas (his name is not mentioned). This girl had been abandoned by her parents and had been brought up by a Rishi called Sthulakesa. (Refer to [Maha:1.8]).

Ruru (रुरु).—[masculine] a kind of deer.

6) Name of a son of the Ṛṣi Pramati by the Apsaras Ghṛtācī, [Mahābhārata; Kathāsaritsāgara]

10) of a Dānava or Daitya (said to have been slain by Durgā), [Kathāsaritsāgara]

Search found 31 books and stories containing Ruru; (plurals include: Rurus). You can also click to the full overview containing English textual excerpts. Below are direct links for the most relevant articles: