Riddhi means something in Buddhism, Pali, Hinduism, Sanskrit, Jainism, Prakrit, the history of ancient India, Marathi, Hindi, biology. If you want to know the exact meaning, history, etymology or English translation of this term then check out the descriptions on this page. Add your comment or reference to a book if you want to contribute to this summary article.

The Sanskrit terms Ṛddhī and Ṛddhi can be transliterated into English as Rddhi or Riddhi, using the IAST transliteration scheme (?).

Alternative spellings of this word include Hriddhi. 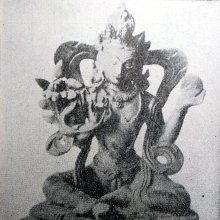 Ṛddhī (ऋद्धी):—One of the sixty-seven Mahauṣadhi, as per Rasaśāstra texts (rasa literature). These drugs are useful for processing mercury (rasa), such as the alchemical processes known as sūta-bandhana and māraṇa.

Ṛddhi (ऋद्धि, “successful, magical”):—Name of one of the sixty-four mātṛs to be worshipped during Āvaraṇapūjā (“Worship of the Circuit of Goddesses”, or “Durgā’s Retinue”), according to the Durgāpūjātattva. They should be worshipped with either the five upācāras or perfume and flowers.

Ṛddhi (ऋद्धि) refers to “one’s assets”, according to the Śivapurāṇa 2.3.36 (“The statements of the seven sages”).—Accordingly, as Himavat (Himācala) said to the mountains: “O fortunate sages, please listen to my words. All my bewilderment has vanished since I have heard the story of Śiva and Śiva. Everything that I possess, my body, wife, Menā, sons, daughter, assets (ṛddhi) and achievements and other things belong to Śiva and not otherwise”.

1b) A deity attendant on Vināyaka.*

Riddhi [ऋद्धि] in the Hindi language is the name of a plant identified with Platanthera edgeworthii (Hook.f. ex Collett) R.K.Gupta from the Orchidaceae (Orchid) family having the following synonyms: Habenaria edgeworthii. For the possible medicinal usage of riddhi, you can check this page for potential sources and references, although be aware that any some or none of the side-effects may not be mentioned here, wether they be harmful or beneficial to health.

Riddhi [रिद्धि] in the Hindi language is the name of a plant identified with Habenaria intermedia from the Orchidaceae (Orchid) family having the following synonyms: Ochyrorchis intermedia, Kryptostoma intermedium.

Ṛddhi (ऋद्धि) refers to the medicinal plant known as “Habenaria edgeworthii Hook. f. ex Collett.” and is dealt with in the 15th-century Yogasārasaṅgraha (Yogasara-saṅgraha) by Vāsudeva: an unpublished Keralite work representing an Ayurvedic compendium of medicinal recipes. The Yogasārasaṃgraha [mentioning ṛddhi] deals with entire recipes in the route of administration, and thus deals with the knowledge of pharmacy (bhaiṣajya-kalpanā) which is a branch of pharmacology (dravyaguṇa).

Ṛddhi (ऋद्धि) is the Sanskrit name for an unidentified medicinal plant, according to verse 5.28-33 of the 13th-century Raj Nighantu or Rājanighaṇṭu. Notes: Also see Vṛddhi. On the name of Ṛddhi and Vṛddhi the Habenaria species are being supplied in the market (Th. B.S. et al. and P.V.S.). Th. B.S. suggests another species for consideration and investigation i.e. Ciraiyākanda or Mālākanda (Eulophia nuda Lindl.).—The tuberous roots of Ṛddhi and Vṛddhi are covered in a sheath. These tubers are white, hairy, porous. The main plant is a creeper.

Properties and characteristics: “Both Ṛddhi and Vṛddhi are sweet, bitter, cold and unctuous. They improve appetite and mental power. Both are good anthelmintics and control kuṣṭha (leprosy and allied skin diseases) and kapha. In the preparations of fomularies any one of these may serve the purpose according to needs. Their simultaneous use is advised, where both of these are available”.

Ṛddhi (ऋद्धि) refers to Habenaria edgeworthii Hook.f. ex Collett., and is the name of a medicinal plant mentioned in the 7th-century Nirantarapadavyākhyā by Jejjaṭa (or Jajjaṭa): one of the earliest extant and, therefore, one of the most important commentaries on the Carakasaṃhitā.—(Cf. Indian Medicinal Plants, Arya Vaidya Sala 3:110, 1993-96.).—Habenaria edgeworthii Hook.f. ex Collett is a synonym of Platanthera edgeworthii (Hook.f. ex Collett) R.K.Gupta.—(Cf. The Plant List, A Working List of All Plant Species, Royal Botanic Gardens, Kew and Missouri Botanical Garden).—Note: “This is one of the drugs of aṣṭavarga which have not been identified as yet. Vārāhīkanda was recommended as a substitute by Bāva Miśra…”.—(Cf. Glossary of Vegetable Drugs in Bṛhattrayī 55, Singh and Chunekar, 1999)

Ṛddhi (ऋद्धि, “prosperity”):—Name of the younger of two wifes of Varuṇa, who is the presiding deity of the invisible world and represents the inner reality of things.

Ṛddhi (ऋद्धि) or Ṛddhyabhijñā refers to “magical powers” and represents one of the five superknowledges (pañcābhijñā) according to the 2nd century Mahāprajñāpāramitāśāstra chapter X. It includes the four kinds of gamana or movement, nirmāṇa or creation and āryaṛddhi or noble magical power. Pañcābhijña represents one of the qualities possessed by the Bodhisattvas that accompanied the Buddha.

Ṛddhi (ऋद्धि) refers to “magical power”, according to the Gaganagañjaparipṛcchā: the eighth chapter of the Mahāsaṃnipāta (a collection of Mahāyāna Buddhist Sūtras).—Accordingly, “Then, the Lord went on to speak these verses: ‘[...] (74) By means of skill in meditation (dhyāna) and the supernormal knowledge of magical power (ṛddhi-abhijñā), they go to a great number of millions of Buddha-fields (buddhakṣetra) to make offerings to innumerable Buddhas, with a mind removed from the vice of all ignorance (sarvājñānakleśa). [...]’”.

Ṛddhi (ऋद्धि) refers to “supernatural (power)”, according to the Vajratuṇḍasamayakalparāja, an ancient Buddhist ritual manual on agriculture from the 5th-century (or earlier), containing various instructions for the Sangha to provide agriculture-related services to laypeople including rain-making, weather control and crop protection.—Accordingly, “Then the Bhagavān went to the residence of Vaiśravaṇa, the Great King, with a great retinue, a great assembly-gathering, a great host, an indication of great supernatural power (ṛddhi-anubhāva), displaying great miracles”.

Ṛddhi (ऋद्धि) [=ṛddhika?] refers to “powerful”, according to the Guru Mandala Worship (maṇḍalārcana) ritual often performed in combination with the Cakrasaṃvara Samādhi, which refers to the primary pūjā and sādhanā practice of Newah Mahāyāna-Vajrayāna Buddhists in Nepal.—Accordingly, “Great guardians beginning with Indra, Lokapālas very powerful (mahā-ṛddhika), Gods standing in the ten directions, Lokapālas I give homage. Indra holding a vajra, with the divine hosts, seize this excellent offering. [...]”.

Ṛddhi (ऋद्धि) refers to “spiritual power” and represents one of the “five deep knowledges” (pañcābhijñā) as defined in the Dharma-saṃgraha (section 20). The Dharma-samgraha (Dharmasangraha) is an extensive glossary of Buddhist technical terms in Sanskrit (e.g., pañca-abhijñāu and ṛddhi). The work is attributed to Nagarjuna who lived around the 2nd century A.D.

Ṛddhi or Ṛddhivaśitā refers to the “mastery of spiritual power” and represents one of the “ten masteries of the Bodhisattvas” (vaśitā) as defined in the Dharma-saṃgraha (section 74).

Ṛddhi or Ṛddhiprātihārya refers to the “miracle of spiritual power” and represents one of the “three kinds of miracles” (prātihārya) as defined in the Dharma-saṃgraha (section 133).

Ṛddhi (ऋद्धि, “wealth”) as in ṛddhi-mada refers to “pride in one’s wealth” and represents one of the eight forms of vainglory (mada), according to Samantabhadra in his Ratna-Karaṇḍa-śrāvakācāra (with commentary of Prabhācandra). These eight madas are included in the twenty-five blemishes (dṛg-doṣas), which are generally held to be the eight madas, the three mūḍhatās, the six anāyatanas, and the eight doṣas.

Ṛddhi (ऋद्धि) or Ṛddhigaurava refers to “(the vanity of) riches”, according to chapter 1.1 [ādīśvara-caritra] of Hemacandra’s 11th century Triṣaṣṭiśalākāpuruṣacaritra (“lives of the 63 illustrious persons”): a Sanskrit epic poem narrating the history and legends of sixty-three important persons in Jainism.—Accordingly, in the sermon of Sūri Dharmaghoṣa:—“[...] the gift of supporting dharma (dharmopagrahadāna) is five-fold: purity of giver, receiver, gift, time, and thought. [... ] That gift would have purity of receiver, whose receiver is such a man [who is] lacking in three vanities (gaurava) [viz., ṛddhi-gaurava], [...]”.—(Cf. Samavāyāṅgasūtra 3, p. 9a. Uttarādhyayana 31.4).

The word extraordinary is attached as a prefix to each of these eight types.

Ṛddhi.—(EI 3), supernatural power. Note: ṛddhi is defined in the “Indian epigraphical glossary” as it can be found on ancient inscriptions commonly written in Sanskrit, Prakrit or Dravidian languages.

Riddhi in India is the name of a plant defined with Platanthera edgeworthii in various botanical sources. This page contains potential references in Ayurveda, modern medicine, and other folk traditions or local practices It has the synonym Habenaria edgeworthii Hook.f. ex Collett (among others).

If you are looking for specific details regarding Riddhi, for example chemical composition, health benefits, pregnancy safety, extract dosage, diet and recipes, side effects, have a look at these references.

7) Prosperity personified as the wife of Kubera.

8) Name of Pārvatī, and of Lakṣmī.

3) [noun] the fact of advancing toward perfection or to a higher or better state; progress.

4) [noun] an achieving of something; accomplishment; esp. a getting supernatural powers.

5) [noun] the plant Helicteres isora of Sterculiaceae family;6) [noun] a kind of medicinal substance made from it.