Ranganatha means something in Hinduism, Sanskrit, Marathi. If you want to know the exact meaning, history, etymology or English translation of this term then check out the descriptions on this page. Add your comment or reference to a book if you want to contribute to this summary article. 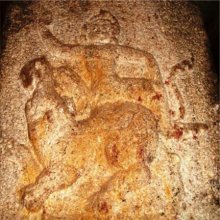 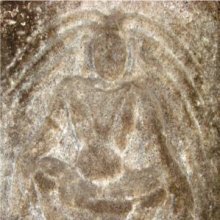 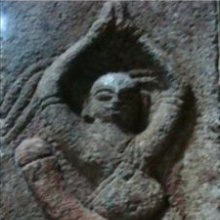 [«previous (R) next»] — Ranganatha in Shilpashastra glossary
Source: Shodhganga: The significance of the mūla-beras (śilpa)

Śrī Raṅganātha is the name of a deity depicted at the Ranganathaswamy Temple in Srirangam (Śrī Raṅgam), which represents a sacred place for the worship of Viṣṇu.—[Śrī Raṅganātha as] Viṣṇu sleeps lying on a serpent with five heads, which serve as a canopy. This serpent is called Śeṣa (durable), Ādiśeṣa or Ananta (the eternal). As Viṣṇu sleeps on An anta, he is called Anantaśayana. The two wives of Viṣṇu, Śrīdevī and Bhūmīdevī, sit at his feet. He has often two hands. The right hand is always placed between the head and the pillow. The left hand is placed on the left thigh of the body. The stalk of a lotus issues from the navel of Viṣṇu, and on its flower Brahmā is seated. This posture is the ardhaśayana of Viṣṇu. While depicting in dance, the ardhaśayana posture of Viṣṇu has no separate term. The sleeping posture of Viṣṇu is depicted in dance in pārśvasūcī posture with one leg stretched sideways. The right hand is in patāka and the left hand is in dolā-hasta.

[«previous (R) next»] — Ranganatha in Hinduism glossary
Source: Shodhganga: The significance of the mūla-beras

Śrī Raṅganātha is workshipped as Viṣṇu at the Ranganathaswamy Temple in Srirangam (Śrī Raṅgam) which represents a sacred place for the worship of Viṣṇu.—According to the sthala-purāṇa: [...] After the victorious return of Rāma from Sri Lanka, he gave many valuable presents to every one who served him in the conquest of Lanka. He presented the sacred vimāna of Śrī Raṅganātha to Vibhīṣaṇa for his unselfish and devoted service towards Rāma. Vibhīṣaṇa on his way to Lanka, he placed the Ranga vimāna on the existing abode of Śeṣa-pīṭha (a snake pedestal) on the banks of Śrī Candra Puṣkaraṇi and went on for a wash. At the same time the lord gave his darsan to all the sages and to King Dharma Varma and accepted to stay there to the request of the king. When Vibhīṣaṇa tried to carry the abode of the lord, he was unable to carry. The lord told him that the lord has blessed king Dharma Varma earlier and asked Vibhīṣaṇa to return to his capital of Lanka and that he would see his capital and bless him forever. Thus, Lord Śrī Raṅganātha became the deity for all the kings of the Chola dynasty.

raṅganātha (रंगनाथ).—m (S) A common term for the figures (of copper or brass) representative of the child kṛṣṇa in certain postures or attitudes.

Temples in Chikkali < [Rajadhiraja I]

Temples in Tribhuvani < [Rajadhiraja I]