Rahula means something in Buddhism, Pali, Hinduism, Sanskrit, the history of ancient India. If you want to know the exact meaning, history, etymology or English translation of this term then check out the descriptions on this page. Add your comment or reference to a book if you want to contribute to this summary article. 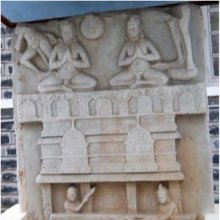 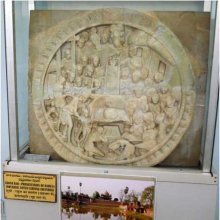 Rāhula (राहुल) is the name of a Śrāvaka mentioned as attending the teachings in the 6th century Mañjuśrīmūlakalpa: one of the largest Kriyā Tantras devoted to Mañjuśrī (the Bodhisattva of wisdom) representing an encyclopedia of knowledge primarily concerned with ritualistic elements in Buddhism. The teachings in this text originate from Mañjuśrī and were taught to and by Buddha Śākyamuni in the presence of a large audience (including Rāhula).

Rahula, the Elder: the actual son of the buddha Shakyamuni and the 10th arhat from the set of sixteen Great Arhats. Rahula has a number of different ways in which he is depicted. The most common depiction in Tibetan art is for him to be holding up a jeweled crown with both hands. Chinese depictions often have him holding a staff in one hand and a tiger or lion seated at his feet. The iconography of the arhats is not fixed in art or literature.

Rāhula is the name of a mahāsiddha, of which eighty-four in total are recognized in Vajrayāna (tantric buddhism). His title is “the rejuvenated dotard”. He lived somewhere between the 8th and the 12th century AD.

These mahāsiddhas (e.g., Rāhula) are defined according to the Abhayadatta Sri (possibly Abhayākaragupta) tradition. Its textual origin traces to the 11th century caturāsiti-siddha-pravṛtti, or “the lives of the eighty-four siddhas”, of which only Tibetan translations remains. Rāhula (and other Mahāsiddhas) are the ancient propounders of the textual tradition of tantric or Vajrayana Buddhism.

Only son of Gotama Buddha. He was born on the day on which his father left the household life (J.i.60; AA.i.82, etc.; cf. J.i.62). When the Buddha visited Kapilavatthu for the first time after his Enlightenment and accepted Suddhodanas invitation, Rahulas mother (Rahulamata) sent the boy to the Buddha to ask for his inheritance (dayajja). The Buddha gave him no answer, and, at the conclusion of the meal, left the palace. Rahula followed him, reiterating his request until at last the Buddha asked Sariputta to ordain him. (According to SNA.i.340, Moggallana taught him the kammavaca; see also J.ii.393). When Suddhodana heard of this he protested to the Buddha, and asked as a boon that, in future, no child should be ordained without the consent of his parents, and to this the Buddha agreed (Vin.i.82f.; the story of Rahulas conversion is also given at DhA.i.98f).

It is said (AA.i.145) that immediately after Rahulas ordination the Buddha preached to him constantly (abhinhovadavasena) many suttas for his guidance. Rahula himself was eager to receive instruction from the Buddha and his teachers and would rise early in the morning and take a handful of sand, saying: May I have today as many words of counsel from my teachers as there are here grains of sand! The monks constantly spoke of Rahulas amenability, and one day the Buddha, aware of the subject of their talk, went amongst them and related the Tipallatthamiga Jataka (J.i.160ff ) and the Tittira Jataka (J.iii.64ff ) to show them that in past births, too, Rahula had been known for his obedience. When Rahula was seven years old, the Buddha preached to him the Ambalatthika Rahulovada Sutta (q.v.) as a warning that he should never lie, even in fun. Rahula used to accompany the Buddha on his begging rounds. Sometimes he would accompany Sariputta on his begging rounds. He was present when Sariputta went to his (Sariputtas) mothers house, where he was roundly abused by her for having left her. DhA.iv.164f).

Rahula noticed that he harboured carnal thoughts fascinated by his own physical beauty and that of his father, the Buddha preached to him, at the age of eighteen, the Maha Rahulovada Sutta (q.v.). Two other suttas, also called Rahulovada, one included in the Samyutta and the other in the Anguttara (see below), formed the topics for Rahulas meditation (Vipassana). To these Suttas Buddhaghosa (MA.i.635) adds the Samanera, or Kumarapanha, and proceeds to enumerate the different purposes which the Buddha had in view in preaching these suttas; see also AA.ii.547. SNA.i.340 says, about the Rahula Sutta (q.v.), that the Buddha constantly preached it to Rahula. See also the Rahula Samyutta.

Later, the Buddha, knowing that Rahulas mind was ripe for final attainment, went with him alone to Andhavana,

Rāhula (राहुल) is the name of the son of the Buddha according to the 2nd century Mahāprajñāpāramitāśāstra (chapter XXII).—Accordingly, “When Lo heou lo (Rāhula) was a child, he was careless about his speech. When the Buddha was present and someone came to ask Rāhula: ‘Is the Buddha here?’, Rāhula answered mischievously: ‘He is not here’. When the Buddha was absent and someone asked Rāhula: ‘Is the Bhagavat here?’, he answered mischievously: ‘The Buddha is here’. Some people reported this to the Buddha, who said to Rāhula: ‘Go and get some water in a basin (udākadhāna) and wash my feet’.”.

[«previous (R) next»] — Rahula in Buddhism glossary
Source: Buddhist Door: GlossaryHe was one of the Ten Great Disciples of Shakyamuni. He was the first in esoteric practices and in desire for instruction in the Law. He was also the son of Shakyamuni.

Rāhulā (राहुला) is the name of a river mentioned in the Nīlamatapurāṇa that remains unidentified.

Search found 71 books and stories containing Rahula, Rāhula, Rāhulā; (plurals include: Rahulas, Rāhulas, Rāhulās). You can also click to the full overview containing English textual excerpts. Below are direct links for the most relevant articles:

Story of exhortations to Rāhula < [Section I.4 - Abstention from falsehood]

The story of Yaśodharā < [Part 2 - Means of acquiring meditation]

The Buddha and His Disciples (by Venerable S. Dhammika)

Part 5 - Discourses delivered by the Buddha with Reference to Venerable Rāhula < [Chapter 31 - The Monk Sudinna, the Son of the Kalanda Merchant]

Chapter 56 - The Lesson Given To Rahula

Chapter 5 - The Ties of Life

Advice To Rāhula (by Nyanaponika Thera)