Putra means something in Buddhism, Pali, Hinduism, Sanskrit, Jainism, Prakrit, the history of ancient India, Marathi, Hindi. If you want to know the exact meaning, history, etymology or English translation of this term then check out the descriptions on this page. Add your comment or reference to a book if you want to contribute to this summary article. 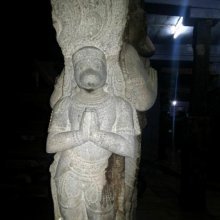 1) Putra (पुत्र) refers to “sons”, mentioned as one of the potential rewards of Śiva-worship, according to the Śivapurāṇa 2.1.12:—“[...] those who desire magnificent buildings, beautiful ornaments, beautiful women, wealth to satiety, sons and grandsons (putra-pautra), health, splendid body, extraordinary status, heavenly happiness and final salvation or profound devotion to the great lord shall duly worship Śiva by virtue of their merit accumulated by them. Sure success will be his who regularly worships Śiva liṅga with great devotion. He will never be afflicted by sins”.

2) Putra (पुत्र) refers to “sons”, which is mentioned as obtainable through the worship of Śiva, according to the Śivapurāṇa 2.1.14:—“[...] a person desirous of long life shall worship him with Dūrvā grass. A person desirous of sons (putra-kāma) shall worship him with Dhattūra flowers. A Dhattūra plant with red stem is specially auspicious for worship. A worshipper using Agastya flowers will earn great fame”.

1b) A son of Svāyambhuva Manu.*

1c) A son of Priyavrata given to yoga: had no inclination for ruling the kingdom.*

Putra (पुत्र) refers to a “son” (i.e., of the king), according to the Bṛhatsaṃhitā (chapter 3), an encyclopedic Sanskrit work written by Varāhamihira mainly focusing on the science of ancient Indian astronomy astronomy (Jyotiṣa).—Accordingly, “If, when the rays are turned away from the earth the colour of the sun be that of copper the commander-in-chief [i.e., senāpati] dies; if it be green or yellow the king’s son [i.e., narendra-putra] dies; if it be white the royal chaplain dies. If the sun (āditya) be variegated in colour or of the colour of smoke there will be either immediate rain or mankind will suffer from robbers and from weapons”.

Putra (पुत्र) refers to “one’s son”, according to the Arthaśāstra verse 1.9.9-10.—Accordingly, “He should appoint as chaplain a man who comes from a very distinguished family and has an equally distinguished character, who is thoroughly trained in the Veda together with the limbs, in divine omens, and in government, and who could counteract divine and human adversities through Atharvan means. He should follow him as a pupil his teacher, a son (putra) his father, and a servant his master”.

Putra (पुत्र) refers to the “son”, according to Sāhib Kaul’s Śārikāstrotra.—Accordingly, “[...] My devotion to you nourishes me every day, as the rise of the full moon always nourishes the ocean. On account of the true affluence of victorious devotion to you I even ignore the excellent Lakṣmī. The whole world consists of you, Goddess of Gods! Your body is consciousness, you are alone and perfectly established. Nowhere is there ignorance. Thus, where do we see the son of a barren woman (vandhyā-putra) run and raise his bow? [...]”.

Putra (पुत्र) refers to a “son”, according to the Devyāmata (chapter 105).—Accordingly, [while describing the consequences of a doorway]—“[...] Those facing north are listed next, in sequence, from the northwest on. At Roga is bondage. At Nāga (Vāsuki) is an enemy. At Mukhya is an increase in sons and wealth. At Bhalvāṭa is gain. At Soma is a gain in wealth. At Anantaka is heroism in sons (putra-vaira). [...]

[«previous (P) next»] — Putra in Pancaratra glossary
Source: Universität Wien: Sudarśana's Worship at the Royal Court According to the Ahirbudhnyasaṃhitā

Putra (पुत्र) refers to a “son”, according to the Ahirbudhnyasaṃhitā, belonging to the Pāñcarātra tradition which deals with theology, rituals, iconography, narrative mythology and others.—Accordingly, “[...] If the female Demon born of the enemy’s aggressive ritual takes possession of the King, the latter would die on the spot just after having seen her, there is no doubt about that. [The King’s] sons, ministers (putra—putrāṃśca mantriṇaścāpi), chief Queen as well as the city itself, the Demoness, clad in a garland of flames, destroys everything in just a second”.

[«previous (P) next»] — Putra in Tibetan Buddhism glossary
Source: academia.edu: The Structure and Meanings of the Heruka Maṇḍala

Putra (पुत्र) is the name of a Vīra (hero) who, together with the Ḍākinī named Putrī forms one of the 36 pairs situated in the Agnicakra, according to the 10th century Ḍākārṇava chapter 15. Accordingly, the agnicakra refers to one of the three divisions of the saṃbhoga-puṭa (‘enjoyment layer’), situated in the Herukamaṇḍala. The 36 pairs of Ḍākinīs and Vīras [viz., Putra] are red in color; they each have one face and four arms; they hold a skull bowl, a skull staff, a small drum, and a knife.

Putra (पुत्र) and Putrī refers to “children” [i.e., dhyeyasya bhartṛ-bhartrī putra-putrī], according to the Guru Mandala Worship (maṇḍalārcana) ritual often performed in combination with the Cakrasaṃvara Samādhi, which refers to the primary pūjā and sādhanā practice of Newah Mahāyāna-Vajrayāna Buddhists in Nepal.

[«previous (P) next»] — Putra in Jainism glossary
Source: The University of Sydney: A study of the Twelve Reflections

1) Putra (पुत्र) refers to “children”, according to the 11th century Jñānārṇava, a treatise on Jain Yoga in roughly 2200 Sanskrit verses composed by Śubhacandra.—Accordingly, “If children, wives, wealth, relations (putra—putrastrīdhanabāndhavāḥ) [and] bodies will inevitably go away, then why is one distressed uselessly for the sake of them?”.

2) Putra (पुत्र) refers to the “son”, according to the Jñānārṇava.—Accordingly, “Here [in the cycle of rebirth] a king becomes an insect and an insect becomes the chief of the gods. An embodied soul might wander about, tricked by [their] karma without being able to help it. For corporeal [souls] the mother becomes the daughter, the sister, even the wife. The father, moreover, becomes the son (putra) and he obtains the paternal home”.

Putra.—cf. Nigama-putra (LL), ‘the inhabitant of a nigama (township).’ Cf. Durgā-putra, Puruṣottama-putra, etc. (IE 7-1-2), probably confused with pāṇḍu-putra and used to indicate ‘five’. Note: putra is defined in the “Indian epigraphical glossary” as it can be found on ancient inscriptions commonly written in Sanskrit, Prakrit or Dravidian languages.

putra (पुत्र).—m (S) A son. Pr. sōḷā varṣēṃ putra maga mitra Until the sixteenth year, treat your son as a boy or subject youth; after that regard him as a friend. 2 In Hindu law twelve kinds of Son are enumerated. See dvādaśavidhaputra. putramukha pāhaṇēṃ To inspect the visage and features of a newborn child whilst reciting a mantra.

3) A dear child (a term of endearment in addressing young persons).

(-ttraḥ) 1. A son. 2. A child, in the language of the Vedas. 3. The fifth mansion from the point of conjunction of the sun, and a zodiacal sign. f. (-ttrī) A daughter. du. always, (-ttrī) Son and daughter. E. put, and trā to preserve, the hell, (from,) aff. ka; or pūj to purify, aff. ttra; one ta may be rejected in writing this word, and its derivatives, leaving putra. The word is thus derived by Manu. viz:— “punnāmno narakādyasmāt pitaraṃ trāyate sutaḥ . tasmātputra iti proktaḥ khayameva svayaṃbhūvā ..”

3) (in [astrology]) Name of the fifth house, [Varāha-mihira]

Putra (पुत्र) in the Sanskrit language is related to the Prakrit words: Putta, Puttullaṃ, Poṭṭa.

3) [noun] a term of endearment used to address a young boy (who may not be one’s son).

4) [noun] (astrol.) the fifth house from one’s birth house in the zodiac.

Search found 76 books and stories containing Putra; (plurals include: Putras). You can also click to the full overview containing English textual excerpts. Below are direct links for the most relevant articles:

Verse 10.6 < [Chapter 10 - Vibhūti-yoga (appreciating the opulences of the Supreme Lord)]