Pratyangira means something in Hinduism, Sanskrit. If you want to know the exact meaning, history, etymology or English translation of this term then check out the descriptions on this page. Add your comment or reference to a book if you want to contribute to this summary article. 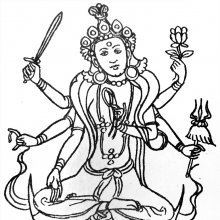 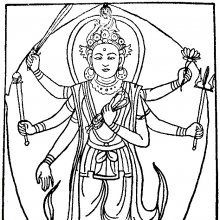 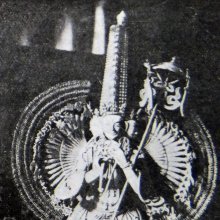 Pratyangira.—Narasimhi is sometimes identified with Pratyangira who is endowed with four arms and a face as terrible as that of a lion. Her head is that of a male lion and her body is that of a human-female. Her hair stands erect on her head. In her hands she holds a skull, trident, Damaru and the noose (nagapasa).  She is seated on a lion and by her power destroys all enemies.

In Tantric worship, Pratyangira is shown with a dark complexion, ferocious in aspect, having a lion’s face with reddened eyes and riding a lion wearing black garments, she wears a garland of human skulls; her hair strands on end, and she holds a trident, a serpent in the form of a noose, a hand-drum and a skull in her four hands. She is also associated with Bhairava, as Atharvana-Bhadra-Kali.

Pratyaṅgirā (प्रत्यङ्गिरा) is a form of Kālī and identified with Goddess Tvaritā, according to the Kulakaulinīmata verse 3.310.—Tvaritā is also identified as Pratyaṅgirā, a form of Kālī.1 An indirect link with her and Kālī is also made in the Kālīkrama Tantra, the Kramasadbhāva, from which most of chapter fifteen of the Kulakaulinīmata is drawn. There Narasiṃha takes the place of Bhairava and Tvaritā of Kālī (as Kālasaṃkarṣiṇī), his consort. We are told that Viṣṇu can assume two forms. One is that of the fierce Narasiṃha. The other is like a child. His power is the goddess Tvaritā.

(-rā) A form of Durga, one of the goddesses of the Tantrikas.

Chapter 314 - Mantras relating to the worship of Goddess Tvaritā