Prastara means something in Hinduism, Sanskrit, Jainism, Prakrit, Marathi, Hindi. If you want to know the exact meaning, history, etymology or English translation of this term then check out the descriptions on this page. Add your comment or reference to a book if you want to contribute to this summary article. 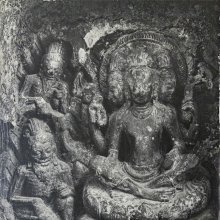 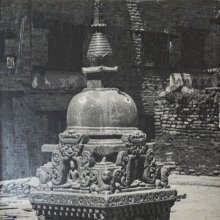 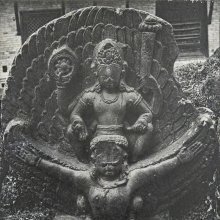 2) Prastara (प्रस्तर):—One of the eight types of villages, according to Chapter 9 of the Mānasāra (called the grāmalakṣaṇam). The Mānasāra is one of the traditional authorative Hindu treatises on Vāstuśāstra. The form of this village is said to be tattadrūpeṇa, which means it represents the form of the meaning of its Sanskrit name.

Prastara (प्रस्तर) refers to a “surface” (a flat top). It represents a part of the trivarga structure, where it is also known as kapota or paṭṭikā.

1) Prastāra (प्रस्तार, “permutations”).—The word prastāra is a technical term used in Sanskrit Prosody by which different kinds of calculations of metres are possible. Prosodists generally accept that the classical metres are the prastāras (permutations) of various Vedic metres like Gāyatrī, Uṣṇik, Bṛhatī and Triṣṭubh etc. Each metre is having a number of prastāras among which only very few are accepted and used by poets generally.

3) Prastāra (प्रस्तार) is the name of a work ascribed to Rāmasvāmi Dīkṣita (father of Śivasūrya) related to the topics of Sanskrit prosody (chandas) but having an unknown period of composition.

Prastāra (प्रस्तार) refers to one of the five limbs (aṅga) belonging to Aḍḍitā type of song (dhruvā) defined in the Nāṭyaśāstra chapter 32.9-16. Accordingly, “depending on different conditions, the dhruvās are known to be of five classes”.

Prastāra (प्रस्तार) or Prastārāgama refers to one of upāgamas (supplementary scriptures) of the Vīrāgama which is one of the twenty-eight Siddhāntāgama: a classification of the Śaiva division of Śaivāgamas. The Śaivāgamas represent the wisdom that has come down from lord Śiva, received by Pārvatī and accepted by Viṣṇu. The purpose of revealing upāgamas (e.g., Prastāra Āgama) is to explain more elaborately than that of mūlāgamas (e.g., Vīra-āgama) and to include any new idea if not dealt in mūlāgamas.

Prastara (प्रस्तर) refers to a “spread (of kuśa-grass)”, according to the Mataṅgapārameśvara (with Rāmakaṇṭha’s commentary).—Accordingly, “[...] [Rāmakaṇṭha]:—Now if you ask what this vidyāvrata is which he must have observed, this is what the text teaches: The power of the vidyā that is mentioned here [in this compound vidyāvrata] is first to be recited for a year in a temple to Śiva, while exercising control of the senses, maintaining purity (śuciṣmat—śuciṣmatā), eating daily [only the sacrificial gruel known as] caru, sleeping on the ground in the room reserved for pūjā and fire[-sacrifice] on a spread of kuśa-grass (kuśaprastara-śāyin), with his mind engaged [in meditation], focussed. [Rāmakaṇṭha]:—It [viz. the power of the vidyā] is the vyomavyāpin.

Prastara (प्रस्तर) refers to “stones” according to the second chapter (dharaṇyādi-varga) of the 13th-century Raj Nighantu or Rājanighaṇṭu (an Ayurvedic encyclopedia). The Dharaṇyādi-varga covers the lands, soil, mountains [viz., Prastara], jungles and vegetation’s relations between trees and plants and substances, with their various kinds.

Prastāra (प्रस्तार) (or Gahvara) refers to a “grid” (or “diagram”) from which letters are extracted to make mantras. Such grids were well-known to earlier Tantric schools. This one in particular was drawn wholesale from the Trika school which, as we shall see, was the source of virtually all the major features of this Triangle (but not the Point in the centre of it) except those most specifically related to the Kubjikā cult. We may begin to briefly trace these developments from this feature of the Triangle.

Prastāra (प्रस्तार) participated in the war between Rāma and Rāvaṇa, on the side of the latter, as mentioned in Svayambhūdeva’s Paumacariu (Padmacarita, Paumacariya or Rāmāyaṇapurāṇa) chapter 57ff. Svayambhū or Svayambhūdeva (8th or 9th century) was a Jain householder who probably lived in Karnataka. His work recounts the popular Rāma story as known from the older work Rāmāyaṇa (written by Vālmīki). Various chapters [mentioning Prastāra] are dedicated to the humongous battle whose armies (known as akṣauhiṇīs) consisted of millions of soldiers, horses and elephants, etc.

1) A couch of leaves and flowers.

6) A paragraph, section of a work.

7) A handful of darbha grass.

1) Strewing, spreading out, covering with.

2) A bed of leaves and flowers.

6) (In prosody) A tabular representation of the long and short vowels of a metre with all possible varieties.

7) A process in preparing minerals.

(-raḥ) 1. A jungle, a thicket or wood, overgrown with grass. 2. Covering, spreading. 3. A bed made with blossoms, leaves, &c. 4. Any bed or couch. 5. A flat surface, a plain. 6. Representation of the long and short vowels of a metre and its possible varieties, (in prosody.) E. pra before, stṛ to spread, aff. ghañ .

19) [v.s. ...] a representation or enumeration of all the possible combinations of certain given numbers or of short and long syllables in a metre, [Colebrooke]

1) [noun] a bed made by spreading plant leaves and flowers.

3) [noun] a piece of land that is uniformly level.

1) [noun] the act of spreading over or covering a wide area with (something).

5) [noun] the act or process of finding the prosody of a verse.

7) [noun] arecognising of musical note of a song sung and writing it as per the rules of notation.

Chapter 107 - The creation of Svāyambhuva Manu

Chapter 330 - An abridgement of the rules of metres