Prasarita means something in Hinduism, Sanskrit, Marathi, Hindi. If you want to know the exact meaning, history, etymology or English translation of this term then check out the descriptions on this page. Add your comment or reference to a book if you want to contribute to this summary article.

Alternative spellings of this word include Prasarit. 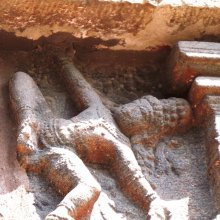 Prasārita (प्रसारित) is a Sanskrit word referring to “spread”. It is used in Yoga.

1) Prasārita (प्रसारित, “extended”) refers to a specific gesture (āṅgika) made with the sides (pārśva), according to the Nāṭyaśāstra chapter 10. The sides are one of the six major limbs (aṅga) used to perform certain gestures (āṅgika). These gestures form a part of the histrionic representation (abhinaya).

2) Prasārita (प्रसारित) also refers to a type of lying-down posture (śayana); it is a Sanskrit technical term defined in the Nāṭyaśāstra chapter 12.

1) Prasārita (प्रसारित, “stretched”).—A type of gesture (āṅgika) made with the sides (pārśva);—(Instructions): The stretching of the sides in their (respective) directions. (Uses): In joy and the like.

2) Prasārita (प्रसारित).—A type of lying-down posture (śayana).—Instructions: Lying down with one arm as the pillow and the knees stretched, is called the Prasārita posture. It is to be used to represent one enjoying a sleep of happiness.

[«previous (P) next»] — Prasarita in Shilpashastra glossary
Source: Shodhganga: The significance of the mūla-beras (śilpa)

Prasārita (प्रसारित) or Prasāritahasta refers to “spreading out and stretching” and represents one of the four Elirkai gestures, as defined according to texts dealing with śilpa (arts and crafs), known as śilpaśāstras.—Accordingly, pratimā-lakṣaṇa (body postures of the icons) is comprised of hand gestures (hasta, mudrā or kai-amaiti), stances/poses (āsanas) and inflexions of the body (bhaṅgas). There are thirty-two types of hands [viz., prasārita-hasta] classified into two major groups known as tolirkai (functional and expressive gestures) and elirkai (graceful posture of the hand).

Prasārita (प्रसारित) means “spread” (before one’s eyes), according to the Bṛhatsaṃhitā (chapter 2), an encyclopedic Sanskrit work written by Varāhamihira mainly focusing on the science of ancient Indian astronomy astronomy (Jyotiṣa).—Accordingly, “We shall now proceed to give a brief description of (the qualifications of) a jyotiṣaka. [...] On all the above subjects, works of learned men exist. The predictions of one to whom the truths of the science appear as if spread before his eyes [i.e., prasārita], written on his mind and planted in his breast will never fail. A true Astrologer is also one who has thoroughly mastered the Science of Saṃhitā”.

2) [adjective] (something folded) unfolded; spread out.

Prasārita (ಪ್ರಸಾರಿತ):—[noun] (dance.) a reclining posture in which body is turned to one side, legs are streched, one hand is folded and kept as a pillow.