Prasannatara means something in Buddhism, Pali. If you want to know the exact meaning, history, etymology or English translation of this term then check out the descriptions on this page. Add your comment or reference to a book if you want to contribute to this summary article. 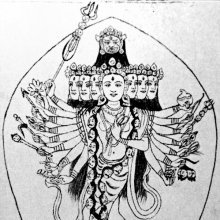 Prasannatārā (प्रसन्नतारा) refers to one of the various emanations of Ratnasambhava, as mentioned in the 5th-century Sādhanamālā (a collection of sādhana texts that contain detailed instructions for rituals).—Her Colour is Yellow; she has eight faces and sixteen arms.

The Dhyāna (meditation instructions) of Prasannatārā described in the Sādhanamālā as follows:—

“The worshipper should conceive himself as (Prasannatārā) whois of golden complexion, of terrible appearance, bestows prosperity,is three-eyed, eight-faced and sixteen-armed. Her brown hair rises upwards and her necklace is made of half-a-hundred heads wet with blood. She emancipates the universe and is terrible to behold. She stands in the pratyālīḍha attitude, has smiling faces, is in the fulness of youth and her garments are of variegated colour. Her first face is yellow, the second to the right is blue, the third green, and the fourth blue like the sky; the face to the left is white like the kunda flower,the second red, and the third blue like the sky; the face on the top is of the colour of smoke, terrible in appearance, distorted and disfigured.

She stands on the moon over the double lotus, is radiant with the glow of the sun, tramples under her left foot Indra, under the right Upendra, and presses Rudra and Brahmā between the two, and destroys the veils of ignorance”.

[The sādhana devoted to her independent form gives her the epithets of Amṛtamukhī and Amṛtalocanā and there is no doubt that except for the face on the top all her seven faces are represented as having charmingly sweet expression. But she is not benign and peaceful. She is fearful like Vidyujjvālākarālī, a form of Ekajaṭā.]