Prajnapti means something in Buddhism, Pali, Hinduism, Sanskrit, Jainism, Prakrit. If you want to know the exact meaning, history, etymology or English translation of this term then check out the descriptions on this page. Add your comment or reference to a book if you want to contribute to this summary article. 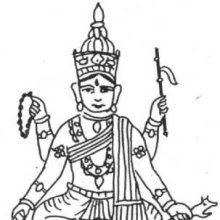 Prajñapti (प्रज्ञप्ति) is the name of an ancient prince from Ilāvati (situated in Kuśadvīpa), according to the Yogavasistha 7.206.—“[...] there is the great island of Kuśadvīpa, surrounded by the seas on all sides; like a watery belt about it, and this land is renowned (for its beauty), all over the three regions of the world. There is the city called Ilāvati, situated on its north eastern side, and is beset by a colonnade of pillars, gilded all over with gold, and glittering with radiant beams, reaching from earth to the skies. There formerly reigned a prince, known by the name of Prajñapti; who ruled on earth as the god Indra in heaven; and to whom this earth or land paid its homage (as the skies do to the regent of heaven)”.

Prajñapti (प्रज्ञप्ति) refers to “(the nature of pure) designation”, according to Mahāprajñāpāramitāśāstra (chapter 41).—Accordingly, “[Digression on a case brought against the Buddha; B. The defense].—[9. Simultaneous Teaching of Existence and Non-existence].—[...] Saying that there is no Ātman is stating the emptiness of beings; saying that there are no dharmas is stating the emptiness of things. Saying that there is an Ātman and knowing the nature of pure designation (prajñapti-lakṣaṇa) is not clinging to the ātman; saying that there is an Ātman within the five aggregates (pañcaskandha) is clinging to the ātman. In order to destroy this clinging to the Ātman, it is said: ‘There is only the five aggregates. Impermanence, suffering, emptiness, non-self, peace and nirvāṇa, that is existence’. [...]”.

It is told by the Blessed One, again, that [true] knowledge is gained independent of any object supporting it, and whatever statements one makes about it are no more than thought-construction, and that as this thought-construction is not to be seized as real, the seizing act of the seizer itself ceases, and when there is thus no seizing, knowledge which is known as discrimination no more evolves.

1) Prajñapti (प्रज्ञप्ति) or Duritāri is the name of the Yakṣiṇī accompanying Sambhavanātha: the third of twenty-four Tīrthaṃkaras or Jinas, commonly depicted in Jaina iconography.—[...] The first name [Duritārī] belongs to the Śvetāmbara representation, the second [Prajñapti] to the Digambara. Duritārī rides a ram and is four-handed. The hands hold Varada, rosary, fiuit and Abhaya. The Digambara Prajñapti places herself upon a bird. She has six hands, which are adorned with an axe, crescent, fruit, sword, (Iḍhi) and Vara-mudrā.

2) Prajñapti (प्रज्ञप्ति) also refers to one of the sixteen Vidyādevīs (goddesses of learning).—In her Śvetāmbara aspect, Prajñapti rides on a peacock and holds a lotus and a Śakti. According to one text of the same school, she holds Varada, Śakti, citrus and Śakti again. The Digambara image should be represented as bearing a sword anda disc. Prajñapti is identical in name with the Digambara Yakṣiṇī of Sambhavanātha. Thus, we find she has borrowed the vehicle of peacock from Yakṣa Trimukha, Prajñapti’s husband. The peacock symbol with lotus should be Vidyādevī’s characteristic. The name might have been derived either from Prajñapti, meaning “intellect” or Prajñā, meaning “Sarasvatī”.

5) Name of a goddess, Vidyādevī (Jainism).

Prajñāpti (प्रज्ञाप्ति).—f., noted only in Mahāvyutpatti as substitute for the usual prajñapti, q.v., compare vāhana-pra° where in citing Lalitavistara the Mahāvyutpatti substitutes ā for a in the word. Besides this [compound], the word occurs Mahāvyutpatti 1415, 6496, 9213; and see anu-pra°. Tibetan on the first two gdags pa (also used for prajñā), making known, but in 9213 bcas pa (and so for anu-pra°), which is ambiguous (context suggests perhaps meaning of prajñapti 2 or 3), and on 6496 alternatively bcaḥ ba, probably intending the same; Japanese deciding, settling, fixing. (Acc. to LaV-P., Index, also occurs in AbhidhK, = prajñapti.)

4) [v.s. ...] (with Jainas) a [particular] magical art personified as one of the Vidyā-devīs, [Kathāsaritsāgara] ([cf. Lexicographers, esp. such as amarasiṃha, halāyudha, hemacandra, etc.] also tī)

1) [noun] the fact or state of knowing; the perception of fact or truth; clear and certain mental apprehension; knowledge.