Phani means something in Buddhism, Pali, Hinduism, Sanskrit, Jainism, Prakrit, Marathi, Hindi. If you want to know the exact meaning, history, etymology or English translation of this term then check out the descriptions on this page. Add your comment or reference to a book if you want to contribute to this summary article. 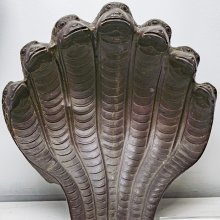 Phaṇī (फणी) is another name for Sarpiṇī, an unidentified medicinal plant, possibly identified with some plant from the Arisaema species (e.g., Arisaema curvatum or Arisaema tortuosum), according to verse 5.125 of the 13th-century Raj Nighantu or Rājanighaṇṭu. The fifth chapter (parpaṭādi-varga) of this book enumerates sixty varieties of smaller plants (kṣudra-kṣupa). Together with the names Phaṇī and Sarpiṇī, there are a total of six Sanskrit synonyms identified for this plant.

Phaṇi (फणि) refers to “serpents”, according to the Bṛhatsaṃhitā (chapter 12), an encyclopedic Sanskrit work written by Varāhamihira mainly focusing on the science of ancient Indian astronomy astronomy (Jyotiṣa).—Accordingly, “The mighty ocean whose waters were swallowed by Agastya, exhibited gems that eclipsed the splendour of the crowns of the Devas [...] There were also seen, moving to and fro, whales, pearl oysters and conch shells, and the sea altogether looked like a summer lake with its moving waves, water lilies and swans. [...] Its huge white waves looked like clouds; its gems looked like stars; its crystals looked like the Moon; and its long bright serpents bearing gems in their hoods [i.e., phaṇi-phaṇa-upala] looked like comets and thus the whole sea looked like the sky”.

Phaṇi (फणि) refers to the “hood (of a Nāga)”, according to the Vajratuṇḍasamayakalparāja, an ancient Buddhist ritual manual on agriculture from the 5th-century (or earlier), containing various instructions for the Sangha to provide agriculture-related services to laypeople including rain-making, weather control and crop protection.—Accordingly [as the Bhagavān taught the detailed offering-manual], “[...] One should prepare a square [space] measuring a hasta, very smooth and well smeared. It should be sprinkled with perfumed water all around. Four Nāga kings should be prepared in the middle of the ditch. Full of brownish cow dung and clay a nine-headed [Nāga king should be prepared] with a hood (phaṇi) and a coiled body. [...]”.

Phaṇin (फणिन्) participated in the war between Rāma and Rāvaṇa, on the side of the latter, as mentioned in Svayambhūdeva’s Paumacariu (Padmacarita, Paumacariya or Rāmāyaṇapurāṇa) chapter 57ff. Svayambhū or Svayambhūdeva (8th or 9th century) was a Jain householder who probably lived in Karnataka. His work recounts the popular Rāma story as known from the older work Rāmāyaṇa (written by Vālmīki). Various chapters [mentioning Phaṇin] are dedicated to the humongous battle whose armies (known as akṣauhiṇīs) consisted of millions of soldiers, horses and elephants, etc.

phaṇī (फणी).—f (phaṇā) A comb. 2 A weaver's instrument for pressing and closing the woof. 3 A combing card. 4 A scraper (of the adhering gūḷa) of sugar-boilers. 5 A clustering stalk of plantains; an off-branch of the fruit-receptacle. 6 The hood of Coluber Naga &c. 7 m S A snake with a hood.

phaṇī (फणी).—f A comb. A weaver's instrument. The hood of Coluber Nâga. A snake with a hood.

1) [noun] a snake that can expand the fold of skin near its head when excited (as a cobra).

2) [noun] Nāgai, the presiding deity of the asterismāślēṣa (Epsilon Hydra).

3) [noun] Rāhu, the serpent-demon, eighth of the nine astrological planets.

4) [noun] a kind of acute, inflammatory virus disease, characterised of blisters on the back.

3) [noun] a short staff used by boys in playing 'cinni-dāṇḍu.

2) [noun] a meal prepared by mixing flour of parched rāgi (sometimes, of rice) with curds.

Verse 2.9.193 < [Chapter 9 - The Lord’s Twenty-One Hour Ecstasy and Descriptions of Śrīdhara and Other Devotees’ Characteristics]

Region Beyond The Coastal Lines (3): Phanigiri < [Chapter 2 - Amarāvatī and other Archaeological Sites of Ancient Andhra Pradesh]

Chapter 294 - The characteristics of different kinds of serpents (nāga-lakṣaṇa)