Pauranika means something in Hinduism, Sanskrit, the history of ancient India, Marathi, Hindi. If you want to know the exact meaning, history, etymology or English translation of this term then check out the descriptions on this page. Add your comment or reference to a book if you want to contribute to this summary article.

Alternative spellings of this word include Pauranik. 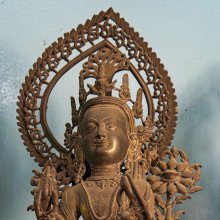 Paurāṇika (पौराणिक) refers to a type of profession mentioned in the Śukranītisāra 2.128-188.—The Śukranītisāra is a Sanskrit work on ethics by Śukrācārya comprised of four chapters. The second chapter (uvarājādikṛtya, “the duties of the royal princes and the like”) describes a large number of varied topics, eg., it contains observations on the ministers, priests, sacive, treasury, a large number of officers and employees (such as a Paurāṇika).

Paurāṇika (पौराणिक) refers to “the brahmana who recites Purana” and represents an official title designating one of the seventy-two officers (niyoga) of the Bāhattaraniyogādhipati circle, according to the Inscriptional glossary of Andhra Pradesh (Śāsana-śabdakośāmu). The bāhattaraniyoga-adhipati is the highest executive officer of this circle (including a Paurāṇika). For example: During the reign of Gaṇapatideva, the area extending between Pānagal to Mārjavāḍi was entrusted to Gaṇḍapeṇḍāru Gangayasāhiṇi as Bāhattaraniyogādhipati. Later on, this office was entrusted to Kāyastha Jannigadeva.

In the Paurānika trimurty concept, Brahma, Viṣṇu and Rudra preside over creation, sustenance and dissolution functions. They are representatives of Śatva, Rajas and Tamas. According to Yāska, they derive from the Vedic triplet Agni (Fire God), Āditya (Sun God) and Vāyu (Air God).

Paurāṇika.—(EI 30; BL), a reciter of the Purāṇas; also pro- bably, an astrologer. Cf. Vyāsa. Note: paurāṇika is defined in the “Indian epigraphical glossary” as it can be found on ancient inscriptions commonly written in Sanskrit, Prakrit or Dravidian languages.

paurāṇika (पौराणिक).—m (S) A Brahman well-read in the Puran̤s; or a public expounder of them.

1) Belonging to the past, ancient.

2) Belonging to the Purāṇas or derived from them.

3) Versed in the legends of the past.

-kaḥ 1 A Brāhmaṇa well-versed in the Purāṇas, a public reader of the Purāṇas.

(-kaḥ-kī-kaṃ) Of or belonging to the Puranas, Pauranic. m.

(-kaḥ) A Brahman, well read in the Puranas, a mythologist. E. purāṇa, and ṭhak aff.

1) [adjective] of or in time long past; ancient.

1) [noun] that which belongs to Purāṇas, the Hindu mythological works.

Search found 27 books and stories containing Pauranika, Paurāṇika; (plurals include: Pauranikas, Paurāṇikas). You can also click to the full overview containing English textual excerpts. Below are direct links for the most relevant articles:

Chapter 1 - The discussion among Vyāsa, Śaunaka and others < [Section 6 - Kailāsa-saṃhitā]