Patakam means something in Hinduism, Sanskrit. If you want to know the exact meaning, history, etymology or English translation of this term then check out the descriptions on this page. Add your comment or reference to a book if you want to contribute to this summary article. 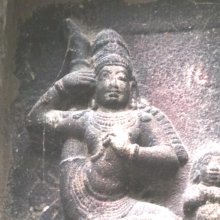 Pāṭakam (Kāñci) refers to one of the 108 Vaishnava Divya Desam (divyadeśas or divyasthalas), located in the topographical division of Toṇṭaināṭu (“Northern Tamil Nadu”), according to the 9th century Nālāyirativviyappirapantam (shortly Nālāyiram).—Tradition would record the Vaiṣṇava divyadeśas or divyasthalas are 108. The divyadeśa is a base of the cult of Viṣṇu in Viṣṇuism [Vaiṣṇavism] tradition. The list of 108 [viz., Pāṭakam] seems to have reached maturation by about the early 9th century CE as all the deśas are extolled in the hymns of the twelve Āḻvārs.

Patakam refers to one of the 108 divyadesas according to Priyavaccan Pillai’s compendium of the Ramayana based on the Nalayirativviyappirapantam.—Patakam is associated with the Mahabharata. The Lord Krishna is said to have taken the form of Pandava-duta on the eve of the Great War.

Search found 3 books and stories containing Patakam, Pāṭakam; (plurals include: Patakams, Pāṭakams). You can also click to the full overview containing English textual excerpts. Below are direct links for the most relevant articles: