Parna means something in Buddhism, Pali, Hinduism, Sanskrit, Marathi, Hindi, biology. If you want to know the exact meaning, history, etymology or English translation of this term then check out the descriptions on this page. Add your comment or reference to a book if you want to contribute to this summary article. 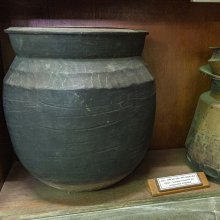 Parṇa (पर्ण) refers to the “leaves” of a tree or plant, as mentioned in a list of seven synonyms, according to the second chapter (dharaṇyādi-varga) of the 13th-century Raj Nighantu or Rājanighaṇṭu (an Ayurvedic encyclopedia). The Dharaṇyādi-varga covers the lands, soil, mountains, jungles and vegetation’s relations between trees [viz., Parṇa] and plants and substances, with their various kinds.

Parṇa (पर्ण) refers to “leaves”, as mentioned in verse 5.6-8 of the Aṣṭāṅgahṛdayasaṃhitā (Sūtrasthāna) by Vāgbhaṭa.—Accordingly, “[...] Not shall one drink (water that is) turbid and covered (āstṛta) with mud, tape-grass, grass, and leaves [viz., parṇa], unseen by sun, moon, and wind, rained upon, thick, heavy, [...]: (such water) one shall not drink”.

Parṇa (पर्ण) [or Parṇaśabara?] refers to a country belonging to “Āgneyī (south-eastern division)” classified under the constellations of Āśleṣā, Maghā and Pūrvaphālguni, according to the system of Kūrmavibhāga, according to the Bṛhatsaṃhitā (chapter 14), an encyclopedic Sanskrit work written by Varāhamihira mainly focusing on the science of ancient Indian astronomy astronomy (Jyotiṣa).—Accordingly, “The countries of the Earth beginning from the centre of Bhāratavarṣa and going round the east, south-east, south, etc., are divided into 9 divisions corresponding to the 27 lunar asterisms at the rate of 3 for each division and beginning from Kṛttikā. The constellations of Āśleṣā, Maghā and Pūrvaphālguni represent the south-eastern division consisting of [i.e., Parṇa, Śabara] [...]”.

Parṇa (पर्ण) refers to “leaves”, according to the Śivapurāṇa 2.3.22 (“Description of Pārvatī’s penance”).—Accordingly, as Pārvatī performed her penance: “[...] Different sorts of worries she did not mind at all. O sage, fixing her mind in Śiva alone she remained firm and steady. The first year she spent in taking fruits, the second in taking leaves [i.e., parṇa-bhojana], in the course of her penance. She spent many years thus. Then Śivā, the daughter of Himavat, eschewed even the leaves. She did not take any food. She was engrossed in the performance of penance. [...]”.

Parṇa (पर्ण) refers to “leaves”, according to Mahāprajñāpāramitāśāstra (chapter 19).—Accordingly, “[...] This pure generosity extends over innumerable lifetimes (aprameyajanman); it does not disappear from lifetime to lifetime; it is like a contract that never expires. This generosity bears its fruit [when it meets] the complex of conditions (pratyayasāmagrī) and favorable time (kāla); it is like the tree (vṛkṣa) that, in season, produces leaves (parṇa), flowers (puṣpa) and fruit (phala); even though the season has not come, the cause (hetu) remains, but there is no fruit”.

2) The feather of an arrow.

1) Relating to or made of leaves, leafy.

-rṇaḥ A hut made of leaves.

10) made of the wood of the Butea Frondosa, [Tāṇḍya-brāhmaṇa; Gobhila-śrāddha-kalpa]

3) [noun] in particular, a leaf of betal plant.

Search found 39 books and stories containing Parna, Parṇa, Pārṇa; (plurals include: Parnas, Parṇas, Pārṇas). You can also click to the full overview containing English textual excerpts. Below are direct links for the most relevant articles:

Verse 1.4.55 < [Chapter 4 - Description of Questions About the Lord’s Appearance]