Paravritta means something in Hinduism, Sanskrit, Marathi. If you want to know the exact meaning, history, etymology or English translation of this term then check out the descriptions on this page. Add your comment or reference to a book if you want to contribute to this summary article.

The Sanskrit term Parāvṛtta can be transliterated into English as Paravrtta or Paravritta, using the IAST transliteration scheme (?). 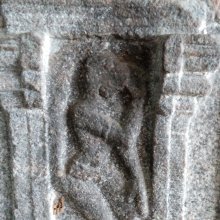 1) Parāvṛtta (परावृत्त).—One of the 32 aṅgahāras (major dance movement) mentioned in the Nāṭyaśāstra chapter 4. The instructions for this parāvṛtta-aṅgahāra is as follows, “assuming Janita-karaṇa and putting forwards a foot, then assuming Alātaka-karaṇa and turning the Trika, [in the Bhramrī Cārī] afterwards the left hand bent and on the cheek, then assuming Kaṭicchinna Karāṇa.”.

2) Parāvṛtta also refers to a specific ‘movement of the head’ (śiras), according to the Nāṭyaśāstra chapter 8. The head is one of the six major limbs (aṅga) used to perform certain gestures (āṅgika). These gestures form a part of the histrionic representation (abhinaya).

1) One of the Nine Movements of the Head. Parāvṛtta (turned round): the head is turned aside. Usage: saying “Do this”, aversion, modesty, quiver, relaxing the features, slighting, hair, etc.

2) One of the Twenty-four Heads. Parāvṛtta: the head is averted. Usage: saying “Do this”, aversion, modesty, etc., relaxing the features, following one who has gone aside, looking back.

Parāvṛtta (परावृत्त).—One of the thirteen gestures of the head;—Instructions: when the face is turned round, the Parāvṛtta head is the result. (Uses): It is to be used in turning away the face, and looking back and the like. (See the Nāṭyaśāstra 8-23)

Parāvṛtta is a Sanskrit term roughly meaning "turned away", "turned backwards", "freed from" or "diverted"

parāvṛtta (परावृत्त).—p S Turned back or from. 2 Reversed. 3 Given back, restored.

Parāvṛtta (परावृत्त).—ppp., and parāvṛtti, n. act. (both Sanskrit), reversed, and reversion, revulsion, of the basic mentality (especially called āśraya, q.v., in Suzuki, Studies, 390 with refs.); technically of the fundamental change in mental attitude which is taught as necessary to knowledge of the true doctrine: parāvṛttāśraya (text °vṛtā°) Laṅkāvatāra-sūtra 9.11; compare 10.14; parāvṛtty-āśraya, having the basis (of conscious- ness) characterized by (this) revulsion 93.3 (or read °vṛttāśra° ?); parāvṛtta, e.g. 284.11; °tti 10.14; for others see Suzuki's Index and Glossary; also in AbhidhK, see LaV-P's Index; Asaṅga (Mahāyāna-sūtrālaṃkāra) ix.12—17 (Lévi *20, *24).

1) [adjective] turned or spun around a centre or axis; revolved.

2) [adjective] goning or gone back; retreated.

3) [noun] (dance.) one of the thirty two karaṇas (coordinated movements of hands and feet).

4) [noun] (dance.) one leg is moved backward and bending at knee, the shank is kept on the ground.

5) [noun] (dance.) a standing with both the feet united, one facing forward and the other facing backward.

Chapter 5 - Nine Movements of the Head

Chapter 6 - Twenty-four Movements of the Head