Paksha means something in Hinduism, Sanskrit, the history of ancient India, Marathi, Hindi. If you want to know the exact meaning, history, etymology or English translation of this term then check out the descriptions on this page. Add your comment or reference to a book if you want to contribute to this summary article.

The Sanskrit terms Pakṣa and Pākṣa can be transliterated into English as Paksa or Paksha, using the IAST transliteration scheme (?). 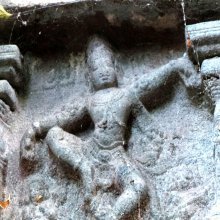 Pakṣa (पक्ष) refers to a lunar phase (fortnights). The term is used throughout Jyotiṣa literature.

In a lunar month there are two pakṣas or fortnights:

Each of these pakshas again consists of fifteen Tithis. A Tithi is the time required by the moon to increase its distance from the sun westwardby twelve degrees of the zodiac.

Pakṣa (पक्ष).—Alternative view or explanation presented by, or on behalf of, a party ; one of the two or more way of presenting a matter. The usual terms for the two views are पूर्वपक्ष (pūrvapakṣa) and उत्तरपक्ष (uttarapakṣa), when the views are in conflict. The views, if not in conflict, and if stated as alternative views, can be many in number, e. g. there are seven alternative views or Pakșas re : the interpretation of the rule इको गुणवृद्धी (iko guṇavṛddhī); cf. M. Bh. on P. I. 1.3; cf. also सर्वेषु पक्षेषु उपसंख्यानं कर्तव्यम् (sarveṣu pakṣeṣu upasaṃkhyānaṃ kartavyam) M. Bh. on P. I. 2.64.

Pakṣa (पक्ष) refers to the “phase of the moon”:—State, either śukla-pakṣa or kṛṣṇa-pakṣa, depending on whether the moon is [respectively] waxing or waning.

Pakṣa (पक्ष):—[pakṣaḥ] Implies for 1. one aspect or party of discussion 2. a specific assumption

Pakṣa (पक्ष) refers to a “sphere” (e.g., the sphere of the supreme syllable), according to the Manthānabhairavatantra, a vast sprawling work that belongs to a corpus of Tantric texts concerned with the worship of the goddess Kubjikā.—Accordingly, “[...] Practice Yoga in the sphere of the Supreme Syllable [i.e., paramākṣara-pakṣa]. The thread (sūtra) of the Supreme Syllable is the heart that fulfils all desires. He who, established in the venerable (goddess) Kujā, knows (this) is liberated from the bondage of birth. (Perfect) contemplation (samādhi) is with (these) sixteen aspects and is (attained) within the form of the sixfold deposition (ṣoḍhānyāsa). He who knows this is (a veritable) Lord of Yogis, the others (who do not) are (just) quoting from books. Once attained the plane that is Void and Non-void, the yogi is freed from bondage”.

pakṣa: Sanskrit for 'the inferential subject'. A term used in Advaita Vedānta.

Paksha (or pakṣa: Sanskrit: पक्ष), refers to a fortnight or a lunar phase in a month of the Hindu lunar calendar.

Literally meaning "side", a paksha is the period either side of the Full Moon Day (Purnima). A lunar month in the Hindu calendar has two fortnights, and begins with the New moon, (Amavasya). The lunar days are called tithis and each month has 30 tithis, which may vary from 20 – 27 hours.

Pakṣa (पक्ष).—In a lunar month there are two pakṣas or fortnights (śukla and kṛṣṇa). In each pakṣa, on each of the days like pratipad, dvitīyā and so on, there are two karaṇas. The sthira-karaṇas come only at the end of the kṛṣṇapakṣa whereas the cara-karaṇas rotate in both the pakṣas, the series of seven getting repeated. For instance, after viṣṭi also known as bhadra or kalyāṇī come bava, bālava and so on.

Pakṣa.—(IE 7-1-2), ‘two’; sometimes also ‘fifteen’. Note: pakṣa is defined in the “Indian epigraphical glossary” as it can be found on ancient inscriptions commonly written in Sanskrit, Prakrit or Dravidian languages.

pakṣa (पक्ष).—m (S) A wing. 2 A half of a lunar month, comprising fifteen days. 3 The Shraddha performed in the dark fortnight of bhādrapada to the manes of all one's male ancestors. 4 A side, part, party, division, sect (in fight, argumentation, a joint work, religion): also the cause, opinion, tenets, dogmata espoused. 5 A way or manner; one way among others; an alternative. 6 A side or flank. 7 The feather of an arrow. 8 An argument, a thesis, a position advanced, a doctrine to be maintained. 9 The subject of an inference. 10 A tribe or class. pakṣa dharaṇēṃ To espouse a side or part.

pakṣa (पक्ष).—m A wing. A half of a lunar month comprising fifteen days. The Shráddh performed in the dark fort night of bhādrapada to the manes of all one's male ancestors. A side, party, division. Also the cause, opinion, tenets, dogmata espoused. A way; an alternative. A side or flank.

6) The half of anything.

13) A point under discussion, a thesis, an argument to be maintained.

15) A symbolical expression for the number 'two'.

28) The side of an equation in a primary division.

1) Belonging to a lunar fortnight, fortnightly.

Pakṣa (पक्ष).—[masculine] wing, feather, flank or side, half, [especially] of the month, a fortnight; party, faction, troop, class; one of two cases, alternative (pakṣe on the other hand, —° with regard to); supposition, statement, thesis, the subject of a syllogism; action, law-suit. Abstr. tā† [feminine], tva† [neuter]

9) [v.s. ...] the half of a lunar month (the first half from new moon to full moon was called pūrva or āpūryamāṇa, later śukla or śuddha; the other half apara or apa-kṣīyamāṇa, later kṛṣṇa or tāmisra; each fortnight consists of 15 Tithis or lunar days called prathamā, dvitīyā etc.), [Brāhmaṇa; Gṛhya-sūtra and śrauta-sūtra; Mahābhārata; Varāha-mihira] etc.

16) [v.s. ...] a point or matter under discussion, a thesis, a particular theory, a position advanced or an argument to be maintained (cf. pūrva-, uttara-)

18) [v.s. ...] (in logic) the proposition to be proved in a syllogism, [Tarkasaṃgraha; Bhāṣāpariccheda]