Pakkha means something in Buddhism, Pali, Jainism, Prakrit. If you want to know the exact meaning, history, etymology or English translation of this term then check out the descriptions on this page. Add your comment or reference to a book if you want to contribute to this summary article. 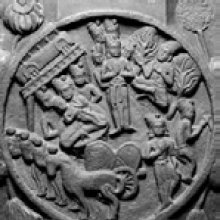 An arahant. He was a Sakyan of Devadaha and was called Sammoda, but in his boyhood he suffered from rheumatism (vataroga) and was crippled for some time; hence he came to be called Pakkha (cripple) even after his recovery. When the Buddha visited his kinsfolk he entered the Order and lived in the forest. One day he saw a kite flying up into the sky with some flesh, from which first one kite and then another grabbed a piece. Reflecting that worldly desires were like the flesh taken by the kite, he developed insight and attained arahantship.

In the time of Vipassi Buddha he had been a Yakkha senapati with a retinue of eighty four thousand and had given the Buddha a divine robe.

He is evidently identical with Mahaparivara of the Apadana. Ap.i.146f.

M Part, side, wing. Period of rising and waning moon.

pakkha : (m.) a cripple; a lamp person; side; party; faction; side of the body; a flank, a wing; a fortnight. (adj.) adherent; associated with.

Search found 11 books and stories containing Pakkha; (plurals include: Pakkhas). You can also click to the full overview containing English textual excerpts. Below are direct links for the most relevant articles:

Covering over with grass < [14. Settlements (Samatha)]

(c) Admission Of Bhikkhunis Into The Order < [Chapter I - What Is Vinaya Pitaka?]