Paduka means something in Hinduism, Sanskrit, Buddhism, Pali, the history of ancient India, Marathi, Hindi. If you want to know the exact meaning, history, etymology or English translation of this term then check out the descriptions on this page. Add your comment or reference to a book if you want to contribute to this summary article. 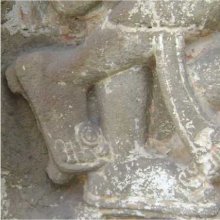 Pāduka (पादुक) is the Sanskrit name of one of Bharata’s sons, mentioned in the Nāṭyaśāstra 1.26-33. After Brahmā created the Nāṭyaveda (nāṭyaśāstra), he ordered Bharata to teach the science to his (one hundred) sons. Bharata thus learned the Nāṭyaveda from Brahmā, and then made his sons study and learn its proper application. After their study, Bharata assigned his sons (eg., Pāduka) various roles suitable to them.

Pāduka (पादुक).—Sandals to be given in vṛkṣotsavam; to be given as gift along with light, umbrella, seat, etc.*

Pāduka (पादुक) refers to the “teacher’s sandals”, according to the Manthānabhairavatantra, a vast sprawling work that belongs to a corpus of Tantric texts concerned with the worship of the goddess Kubjikā.—Accordingly, “The venerable Tree (HSKṢMLVRYŪṂ), called the Teacher’s Sandals [i.e., pāduka], endowed with the energy of passion, (AIṂ) is the First Lord (Ādinātha) of Bhairava’s Command. His will is the divine seed (AIṂ), which is pure with (the direct) experience (of deity), and is the Wheel of the Fire of Time. The principle of Water has arisen which, filled with the energy of the Lord’s feet (HSKṢMLVRYŪṂ), is the principle of the Self. When the Moon is destroyed, the pure and divine disc of the Full Moon invariably dawns. [...]”.

Pādukā (पादुका) refers to the “(glorious) sandals (of Paramaśiva)”, according to the King Vatsarāja’s Pūjāstuti called the Kāmasiddhistuti (also Vāmakeśvarīstuti), guiding one through the worship of the Goddess Nityā.—Accordingly, “I resort to the glorious sandals (śrī-pādukā-dvaya) of Paramaśiva (Śiva in the Ultimate state), who is eternally in equilibrial union with the Goddess characterised by boundless bliss (niḥsīman-ānanda). I revere the Nityā Śakti of the Lord, i.e. Paramaśiva. She possesses all powers and carries out the five tasks [for him]. She bestows grace upon all, is eternal, and is the motherly origin of all good. [...]”.

Pādukā (पादुका) refers to the “sandals” (of one’s Guru) , according to the 13th-century Matsyendrasaṃhitā: a Kubjikā-Tripurā oriented Tantric Yoga text of the Ṣaḍanvayaśāmbhava tradition from South India.—Accordingly, “After this, O Śivā, hear the exposition of the Kula Conduct. After he has joined the tradition of the Siddhas, he should worship his guru as divine. The Yogin who is engaged in the worship of his guru can obtain the highest Power. The guru’s bedstead, his bedding, clothes, ornaments, sandals (pādukā), parasol, antilope-skin, bowl or anything else: if he touches any of these with his feet, he should place them on his head and recite [mantras] eight times. [...]”.

Pāduka (पादुक) refers to a “sandal”, according to the Svacchanda-tantra.—Accordingly, [verse 4.8-13, while describing auspicious dreams]—“[...] [It is auspicious when one dreams of] a pill, wood for cleaning the teeth, yellow pigment on a sword or sandal (pāduka—khaḍgapādukarocanāḥ), sacred thread, ointment, nectar, mercury, medicinal herbs, śakti, a water jar, lotus, rosary, red arsenic or blazing objects of siddhas, which have red chalk as their ends. [...]”

[«previous (P) next»] — Paduka in Yoga glossary
Source: ORA: Amanaska (king of all yogas): A Critical Edition and Annotated Translation by Jason Birch

Pāduka (पादुक) refers to the “(seven-league) sandals”, according to the Brahmayāmala-tantra (or Picumata), an early 7th century Śaiva text consisting of twelve-thousand verses.—Accordingly, [while describing a haṭha-sādhana (foreceful practice)]: “[...] On the eighth day, the Sādhaka sees the shadow of Aghorī. Thus content, she gives [a boon, saying to the Sādhaka], ‘Good, my dear! Choose a boon: either lord of the earth, immortality, levitation, [entry into the] nether-worlds, coming and going through the sky, invisibility, the elixir of mercury, the wish-fulfilling gem, the [magical] sword, the [seven-league] sandals (pāduka) or the [occult] eye collyrium’ [...]”

Paduka.—(Chamba, etc.), sacred foot-prints; from Sanskrit pādukā. Note: paduka is defined in the “Indian epigraphical glossary” as it can be found on ancient inscriptions commonly written in Sanskrit, Prakrit or Dravidian languages.

Pāduka.—(EI 22; LL; HA), foot-prints. See pādukā, etc. Note: pāduka is defined in the “Indian epigraphical glossary” as it can be found on ancient inscriptions commonly written in Sanskrit, Prakrit or Dravidian languages.

Pādukā.—(A. R. Ep., 1958-59, p. 11), foot-prints. Note: pādukā is defined in the “Indian epigraphical glossary” as it can be found on ancient inscriptions commonly written in Sanskrit, Prakrit or Dravidian languages.

pādukā (पादुका).—f (S) A shoe or slipper; but, popularly, clogs or wooden shoes; also an impression of a foot on stone, worshiped as the trace of some god or Guru.

-kam the plinth, the pedestal, the base.

Depiction of Foot-wear < [Chapter 4 - Material Culture of the People]