Padmapani means something in Buddhism, Pali, Hinduism, Sanskrit. If you want to know the exact meaning, history, etymology or English translation of this term then check out the descriptions on this page. Add your comment or reference to a book if you want to contribute to this summary article. 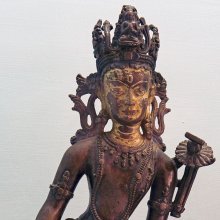 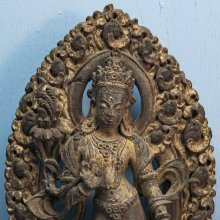 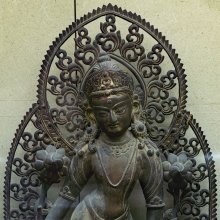 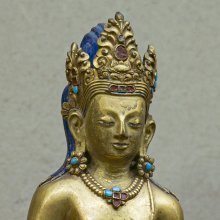 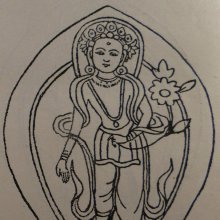 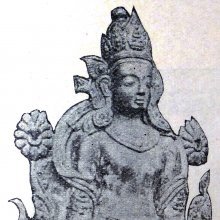 1) Padmapāṇi (पद्मपाणि) is the name of the Bodhisattva offspring associated with Amitābha: one of the Dhyāni-Buddhas, according to Vajrayāna or Tantric Buddhism.—His colour is red; and his symbol is a lotus.—Padmapāṇi is the Bodhisattva attached to the Padma (lotus) family which is presided over by the Dhyāni Buddha Amitābha whose spiritual consort is Pāṇḍarā or Pāṇḍaravāsinī. The Lotus is the symbol of this family and the colour assigned to this family is red. The Bodhisattva Padmapāṇi begets the red colour and a full-blown lotus as his symbol. Padmapāṇi is fairly well represented in the Buddhist countries of the North including Tibet and China.

2) Padmapāṇi (पद्मपाणि) (“lotus bearer”) is another name for Avalokiteśvara: a Bodhisattva commonly depicted in Buddhist Iconography, and mentioned in the 11th-century Niṣpannayogāvalī of Mahāpaṇḍita Abhayākara.—Avalokiteśvara, also called Padmapāṇi () is the spiritual son of the Dhyāni Buddha Amitābha. He is one of the most popular Bodhisattvas of the Buddhist Pantheon having as many as 108 different forms.

“Padmapāṇi also is similar in form to [Piṇḍapātra Lokeśvara], with the difference that here the god displays the Varada pose with his right hand and holds the stem of a lotus in his left.—Piṇḍapātra Lokeśvara is one-faced and two-armed and stands on a lotus. He holds the Piṇḍapātra (the bowl) in his two hands near the navel”.

The names of the 108 deities [viz., Padmapāṇi] possbily originate from a Tantra included in the Kagyur which is named “the 108 names of Avalokiteshvara”, however it is not yet certain that this is the source for the Nepali descriptions.

1) an epithet of Brahman.

Chapter 9 - The Chanting of the Buddha's Name