Padartha means something in Hinduism, Sanskrit, Marathi, Hindi. If you want to know the exact meaning, history, etymology or English translation of this term then check out the descriptions on this page. Add your comment or reference to a book if you want to contribute to this summary article.

Alternative spellings of this word include Padarth. 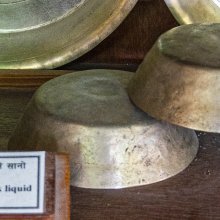 Padārtha (पदार्थ, “basic categories”):—The physician, in order to understand the science of life, should know the six padārthas—

Of them dravy is the central pivot in which guṇa and karma reside with inherence and which acts by the law of sāmānya and viśeṣa.

Padārtha (पदार्थ):—[padārthaḥ] 1. the meaning of a word or group of words; 2. substance which exists, has anomenclature and is a subject of Knowledge. This whole universe is categorised in six padarthas. Ayurveda uses the term Karana (cause) for Padartha

Padārtha (पदार्थ).—A padārtha is what is knowable and nameable—i.e., the ultimate of intellectual analysis. Padārtha has its nearest equivalent in English in ‘Category’. The categories are the objects of right knowledge. This means that right knowledge fulfils its function in comprehending these categories.

Vaiśeṣika: According to the Vaisheshika school, all things which exist, which can be cognised, and which can be named are padārthas (literal meaning: the meaning of a word), the objects of experience.

All objects of experience can be classified into six categories,

Padārtha (पदार्थ, “categories”).—According to Kaṇāda, all object of knowledge or all real comes under padārtha. He mentions in his Vaiśeṣikasūtra only six categories. These are:

Kaṇāda does not mention abhāva (negation) as a separate category (padārtha), but later Vaiśeṣikas recognize abhāva as the seventh category. Śrīdhara, in his Nyāyakaṇḍalī, clarifies this point by saying that Kaṇāda did not mention abhāva separately because abhāva depends on bhāva (existence). That means non-existence depends on existence for its knowledge and therefore, there is no need to state abhāva separately. But the later Nyāyavaiśeṣika writers adopt the seven categories of the Vaiśeṣikas.

Now though these seven categories (padārtha) are accepted by the Vaiśeṣikas, these are also in accord with the postulation of the Naiyāyikas. This is established from the commentary of Vātsyāyana. Viśvanāth Nyāyapañcānana also mentions this. Vātsyāyana speaks of the Vaiśeṣika categories in reference to prameyas.

Padārtha (पदार्थ).—The Nyāya metaphysics recognizes sixteen padarthas or categories and includes all six (or seven) categories of the Vaiśeṣika in the second one of them, called prameya.

These sixteen categories are

Padārtha (पदार्थ, “categories”).—Literally, the term padārtha means the meaning of a word (padasya arthaḥ) or an object signified by a word. Padārtha is that which is an object of cognition and which can be named (abhidheya). It means all objects of experience. According to the Annaṃbhaṭṭa, all things of the world and their relationship with one another come under the seven independent categories.

Gautama (in his fundamental work of Nyāya philosophy) enumerates sixteen padārthas. These are:

The later commentators accept these sixteen categories (padārtha) in their works and explain them accordingly. Vātsyāyana in his Nyāyabhāṣya has justified the gradual order of these categories enumerated by Gautama. Viśvanātha also supports this in his Nyāyasūtravṛtti. Vidyabhusana points out, “The categories are, according to the commentaries on the Nyāyasūtra, supposed to represent stages in the course of a debate between a disputant and his respondent”.

Padārtha (पदार्थ) refers to “the meaning of a word” and is the name of a yukti, or ‘technical division’, according to which the contents of the Arthaśāstra by Cāṇakya are grouped. Cāṇakya (4th-century BCE), aka Kauṭilya, was the chief minister of Chandragupta Maurya, the founder of the famous Maurya Empire.

padārtha (पदार्थ).—m (S) A thing, any material form of being. 2 A nice-dish; a confection; a delicacy; any dainty preparation of food. 3 Meaning of a sentence. 4 A category or predicament in logic. Seven are enumerated;--substance, quality, action, generic property or character, specific or individual property or character, constant and intimate relation, non-existence or nihility (dravya, guṇa, karma, sāmānya, viśēṣa, samavāya, abhāva). 5 Used (as Thing in English) of whatever will admit affirmation or denial. 6 Applied contemptuously, as Thing, creature. Ex. tū kāya pa0 āhēsa? tyācā kāya pa0?

padārtha (पदार्थ).—m A thing, any material form of being. A nice dish; a delicacy. Meaning of a sentence. A category or predicament in logic. Used (as Thing in English) of whatever will admit affirmation or denial. Applied contemptuously, as Thing, creature. Ex. tūṃ kāya pa?B āhēsa? tyācā kāya pa?

3) a head or topic (of which the Naiyāyikas enumerate 16 subheads).

5) the sense of another word which is not expressed but has to be supplied. °अनुसमयः (anusamayaḥ) preforming one detail with reference to all things or persons concerned; then doing the second, then the third and so on (see anusamaya). Hence पदार्थानुसमयन्याय (padārthānusamayanyāya) means: A rule of interpretation according to which, when several details are to be performed with reference to several things or persons, they should be done each to each at a time.

Padārtha is a Sanskrit compound consisting of the terms pada and artha (अर्थ).

(-rthaḥ) 1. Thing, substantial or material form of being. 2. A category of predicament in Logic, of which seven are enumerated; viz:—substance, quality, action, identity, variety, relation and non-existence or annihilation. They are sixteen according to Nyaya Philosophy six according to the Vaiseshika, twenty-five according to Sankhya, twenty six according to Patanjala, and two according to Vaidantica. 3. The meaning of a word or sentence. 4. A head, a topic. E. pada word, thing, and artha meaning.

Padārtha (पदार्थ).—[masculine] the meaning of a word or the thing corresponding to it; thing, object, matter; man, person; category or predicament (ph.).

Padārtha (पदार्थ) in the Sanskrit language is related to the Prakrit word: Payattha.

1) [noun] a meaning conveyed by or attributed to a word; sense.

2) [noun] what a thing is or may be, made of; constituent substance; a material.

3) [noun] any of the liquid dish to be mixed with rice.

Search found 38 books and stories containing Padartha, Padārtha, Pada-artha; (plurals include: Padarthas, Padārthas, arthas). You can also click to the full overview containing English textual excerpts. Below are direct links for the most relevant articles:

Chapter I.g - A brief description of Prameyakamalamārtaṇḍa < [Chapter I - Introduction]

Verse 7.35 - The transgressions of Upabhoga-paribhoga-parimāṇa-vrata < [Chapter 7 - The Five Vows]

Verse 9.31 - The second kind of sorrowful meditation < [Chapter 9 - Stoppage and Shedding of Karmas]