Nupura means something in Buddhism, Pali, Hinduism, Sanskrit, Marathi, Hindi. If you want to know the exact meaning, history, etymology or English translation of this term then check out the descriptions on this page. Add your comment or reference to a book if you want to contribute to this summary article.

Alternative spellings of this word include Nupur. 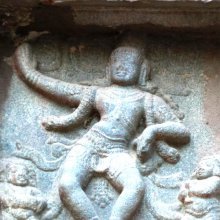 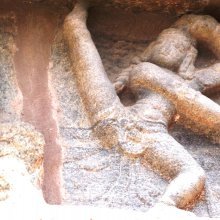 1) Nūpura (नूपुर).—One of the 108 karaṇas (minor dance movement) mentioned in the Nāṭyaśāstra chapter 4. The instructions for this nūpura-karaṇa is as follows, “the Trika to be gracefully turned round, [in the Bhramarī Cārī] the two hands to show respectively Latā and Recita gestures, and the Nūpurapāda Cārī with the feet.”.

2) Nūpura (नूपुर) refers to a type of ornament (ābharaṇa) for the ankels (gulpha) to be worn by females, according to Nāṭyaśāstra chapter 23. Nūpura is classified as an prakṣepya, or “ornaments that are to be worn”. Such ornaments for females should be used in cases of human females and celestial beings (gods and goddesses).

Ābharaṇa (‘ornaments’, eg., kalāpa) is a category of alaṃkāra, or “decorations”, which in turn is a category of nepathya, or “costumes and make-up”, the perfection of which forms the main concern of the Āhāryābhinaya, or “extraneous representation”, a critical component for a successful dramatic play.

Nūpura (नूपुर) refers to an “anklet” and represents a type of “ornaments of leg” (padabhūṣaṇa), as defined in treatises such as the Pāñcarātra, Pādmasaṃhitā and Vaikhānasa-āgamas, extensively dealing with the technical features of temple art, iconography and architecture in Vaishnavism.—The ornaments for the legs and feet are common in Indian sculptures as well in day-to-day life. Bharata (cf. Nāṭyaśāstra 23.38-39) mentions some of the ornaments [viz. nūpura (anklet) for the upper part of the ankle (gulpha)].

Nūpura (नूपुर) refers to “anklets” and is used to visualize Bhairava, according to the Manthānabhairavatantra, a vast sprawling work that belongs to a corpus of Tantric texts concerned with the worship of the goddess Kubjikā.—Accordingly, “[...] His body is adorned on the left (by his consort) and he is adorned with a garland of wild flowers. He wears earrings made of snakes and his sacred thread is Vāsuki. The Lord is adorned with tinkling anklets [i.e., kiṅkiṇī-dhāra-nūpura] and sits on a ghost in the lotus posture. He is adorned with the five insignia and a garland of severed heads that hangs from his neck up to his feet. He dances with the bliss of wine and is accompanied by heroes and Bhairavas. Sixty-four Yoginīs and great mothers encompass him. He is endowed with sixty-four energies and adorned with ghosts and demons. O Śambhu, Bhairava is said to have as his seat (āsana) the Supreme Goddess”.

Nūpura (नूपुर) refers to “(decorative) anklets”, according to the King Vatsarāja’s Pūjāstuti called the Kāmasiddhistuti (also Vāmakeśvarīstuti), guiding one through the worship of the Goddess Nityā.—Accordingly, “[...] She has braided hair. Her limbs are adorned with bracelets, earrings, necklaces, twining laces, girdles, jewels, and anklets (nūpura). Her clothes resemble Bandhūka flowers. She is full of affection, and the hue of her body is brightened up with saffron and sandal paste.. [...]”.

Nūpura (नूपुर) refers to “anklets”, according to the Śrīmatottara-tantra, an expansion of the Kubjikāmatatantra: the earliest popular and most authoritative Tantra of the Kubjikā cult. Accordingly, “O goddess, Svacchanda is in the middle, within the abode of the triangle. Very powerful, he has five faces with three times five flaming eyes. He has ten arms and, very fierce, is adorned with many garlands, ornaments, necklaces and anklets [i.e., hāra-nūpura-maṇḍita]. He has beautiful matted hair and the half moon is his crest jewel. O beloved, the face in the east is white like cow’s milk, it shines brilliant white. Generating great energy, contemplate it thus. One should think that the northern face is like the young rising sun, the form of a pomegranate flower and (red) like a Bandhūka”.

Nūpura (नूपुर) refers to a “woman’s anklet”, according to the Guhyasūtra chapter 9.—Accordingly, “[...] [The Lord spoke]:—[...] On one half, there should be a forehead mark; on one half a [forehead] eye. A ring [should be] in one ear; a [pendant] ear-ornament in one ear. He should put a trident in his right hand and a breast on his left side, a girdle on the left half, a bangle on the left arm, a woman’s anklet (nūpura) on the left leg, a man’s anklet on the right leg and a muñja-grass belt. At the hips, he should put a loin-cloth on the right and wear a woman’s garment on the left.”.

nūpura (नूपुर).—m n (S) An ornament for the feet (of females and children).

(-raḥ-raṃ) An ornament for the toes and feet. E. ṇu to praise or be praised, aff. kvip; or nū an ornament, pur to precede, aff. ka.

2) m. Name of a descendant of Ikṣvāku, [cf. Lexicographers, esp. such as amarasiṃha, halāyudha, hemacandra, etc.]

Nūpura (ನೂಪುರ):—[noun] an anklet with a series of small jingling bells.