Nityanatha means something in Buddhism, Pali, Hinduism, Sanskrit. If you want to know the exact meaning, history, etymology or English translation of this term then check out the descriptions on this page. Add your comment or reference to a book if you want to contribute to this summary article. 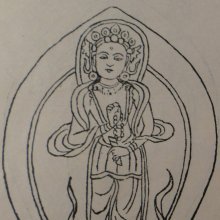 “Nityanātha is identical with [Piṇḍapātra Lokeśvara], with the difference that here the god holds the rosary in his right hand over the book held in his left.—Piṇḍapātra Lokeśvara is one-faced and two-armed and stands on a lotus. He holds the Piṇḍapātra (the bowl) in his two hands near the navel”.

The names of the 108 deities [viz., Nityanātha] possbily originate from a Tantra included in the Kagyur which is named “the 108 names of Avalokiteshvara”, however it is not yet certain that this is the source for the Nepali descriptions.

Part 20 - Chemists of the Metallic School: Nitya-natha < [A Brief History of Indian Chemistry and Medicine]

Part 17 - Chemists of the Metallic School: Nagarjuna < [A Brief History of Indian Chemistry and Medicine]