Navanita means something in Hinduism, Sanskrit, Jainism, Prakrit, Buddhism, Pali, Marathi. If you want to know the exact meaning, history, etymology or English translation of this term then check out the descriptions on this page. Add your comment or reference to a book if you want to contribute to this summary article. 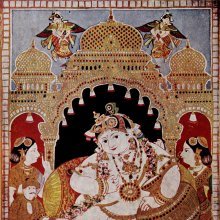 Navanīta (नवनीत) or Navanītamaya refers to “butter”, representing the material of the liṅga of Devī (the Goddesses), according to the Śivapurāṇa 2.1.12, where the Devas and Viṣṇu requested Viśvakarman for liṅgas for the achievement of the desires of all people:—“[...] at our bidding Viśvakarmā made liṅgas and gave them to the devas according to their status. [...] the Goddesses (Devī) took the liṅgas of butter (Navanīta-liṅga); the Yogins took liṅgas of the ash; the Yakṣas took liṅgas of curd and the deity Chāyā took a liṅga of beaten flour. [...] Thus different kinds of liṅgas were given to them by Viśvakarmā which the devas and the celestial sages worship regularly. After giving the devas the various liṅgas from a desire for their benefit, Viṣṇu explained the mode of worship of Śiva to me, Brahmā”.

Navanīta (नवनीत) refers to “fresh butter”, as mentioned in verse 5.35-36 of the Aṣṭāṅgahṛdayasaṃhitā (Sūtrasthāna) by Vāgbhaṭa.—Accordingly, “[...] fresh butter [viz., navanīta] of the same day (is) viriligenio, cooling, productive of colour, strength, and digestion, constipating, (and) destructive of wind, hemorrhage, consumption, hemorrhoids, hemiplegia of the face, and cough; [...]”.

Navanīta (नवनीत) refers to the “fresh butter”, and is commonly found in literature dealing with the topics of dietetics and culinary art, also known as Pākaśāstra or Pākakalā.—Curds was widely used in Vedic period. Ṛgveda mentions a preparation in which the curds were mixed with Soma juice and barley meal. [...] According to Om Prakash, the cream of milk (santānikā), the cream of curds (sara), whey (mastu), fresh butter (navanīta), clarified butter (ghṛta) and the butter milk (takra) are all referred to in Ayurvedic preparations. Curds churned without water (ghola) is referred to in Suśrutasaṃhitā.

Later in the classical literature we can see that fresh butter (navanīta), butter prepared from the previous day’s milk (haiyaṅgavīna) and clarified butter (ghṛta) were widely referred to in. Clarified butter was considered a germicide in Matsyapurāṇa.

Navanīta (नवनीत) refers to “butter” and is one of the four products of milk (gorasa). Dairy farming was carried on in a big way in ancient India. There were large cow-sheds (gomaṇḍava or gomaṇḍapa) where the herds of cows, bulls and calves were kept. There was abundant supply of milk (dugdha or khira) and its four products (gorasa) viz. curd (dadhi), butter milk (udasi or maṭṭhā), butter (ṇavaṇiya or navanīta), clarified butter or ghee (ghṛta or ghaya). Milk and milk products were available in plenty at the dairy (dohaṇa-vāḍaga). The products were stored in ‘khira sālā’. Many articles of daily food were prepared with the help of milk and its products. People could get highly nutritious food because of the easy and large supply of the dairy products.

Navanīta (नवनीत, “butter”) refers to one of the ten classifications of food (āhāra), also known as vikṛtis, according to the 12th century Yogaśāstra (verse 3.130) by Hemacandra. Navanīta may be from cow’s, buffalo’s, goat’s or sheep’s milk, but not from camel’s milk.

Nāvanīta (नावनीत).—[feminine] ī coming from or being like butter; soft, meek.

2) [noun] (mus.) the fortieth of the seventy two main modes in Karnāṭaka system.