Navami means something in Hinduism, Sanskrit, Jainism, Prakrit, Buddhism, Pali, Marathi, Hindi. If you want to know the exact meaning, history, etymology or English translation of this term then check out the descriptions on this page. Add your comment or reference to a book if you want to contribute to this summary article.

Alternative spellings of this word include Navmi. 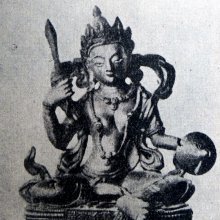 In the month of Āśvina (September-October): “Satī observed a fast on the eighth day of the bright half (śuklapakṣa) and worshipped Śiva with great devotion. When her Nandā rites were concluded on the ninth day (Navamī), while she was engrossed in meditation, Śiva became visible to her”.

2) According to the Śivapurāṇa 2.3.5, as Brahmā narrated to Nārada the birth of Menā’s daughter:—“[...] Desirous of obtaining a child, she worshipped Śivā everyday for twenty-seven years beginning it in the month of March-April [i.e., caitra-māsa]. Observing a fast on the eighth day of the lunar fortnight, she made charitable gifts of sweets, offerings of oblation rice cakes, puddings and fragrant flowers on the ninth day [i.e., navamī-titha]. [...]”.

Navamī (नवमी) refers to one of the various “lunar days” (tithi):—There are approximately 29.5 lunar days in a lunar month. The first fifteen days begin with the first phase of the waxing moon (pratipat) and end with the full moon (pūrṇimā). [...] In accordance with the lunar day, one would utter, [for example, navamī-tithau].

Navamī (नवमी) refers to one of the 32 mountains between the lotus-lakes situated near the four Añjana mountains, which are situated in the “middle world” (madhyaloka), according to chapter 2.3 [ajitanātha-caritra] of Hemacandra’s 11th century Triṣaṣṭiśalākāpuruṣacaritra (“lives of the 63 illustrious persons”): a Sanskrit epic poem narrating the history and legends of sixty-three important persons in Jainism.

navamī (नवमी).—f (S) The ninth day of the lunar fortnight.

navamī (नवमी).—f The ninth day of the lunar fort- night.

1) [noun] the ninth day of a lunar fortnight.

Search found 26 books and stories containing Navami, Navamī; (plurals include: Navamis, Navamīs). You can also click to the full overview containing English textual excerpts. Below are direct links for the most relevant articles: