Nagakanya means something in Buddhism, Pali, Hinduism, Sanskrit, Marathi. If you want to know the exact meaning, history, etymology or English translation of this term then check out the descriptions on this page. Add your comment or reference to a book if you want to contribute to this summary article. 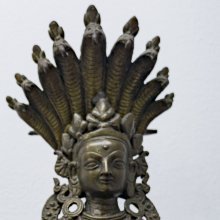 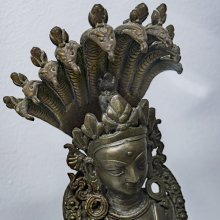 1) Nāgakanyā (नागकन्या) refers to refers to a group of deities according to the Śivapurāṇa 1.24, while explaining the application of Tripuṇḍra to the body:—“[...] or the devotee shall apply the Tripuṇḍra in sixteen parts of the body. [...] or the sixteen parts are:—Head, hair, two eyes, the mouth, two arms, chest, navel, two thighs, knees, two feet and the back. The deities are:—Śiva, Candra, Rudra, ka (Brahmā), Vighneśvara, Viṣṇu, Śrī in the heart, Śambhu, Prajāpati in the navel, Nāga, Nāgakanyās, Ṛṣikanyās in the feet and the ocean of vast expansion in the back. Now the eight parts are mentioned”.

2) Nāgakanyā (नागकन्या) refers to the “Nāga ladies”, according to the Śivapurāṇa 2.2.22. Accordingly as Śiva said to Sitā:—“[...] O my beloved, beautiful woman, clouds will not reach the place where I have to make an abode for you. [...] The daughters of the king of serpents, the mountain damsels, the Nāga ladies (nāgakanyā) and the Turaṅga-Mukhīs will assist you in their excited flutter in congratulating you. Seeing your face of unequalled splendour and beauty and your body of uncommon lustre, the celestial ladies there, despising their own beauty and lacking in interest in their own qualities will begin to stare at you with winkless eyes”.

Nāgakanyā (नागकन्या) refers to “Nāga maidens”, according to Sāhib Kaul’s Śārikāstrotra.—Accordingly, “[...] He who remembers your next syllable, which is īśa with abja, vahni, and padma, is remembered by goddesses in heaven, Nāga maidens (nāgakanyā) in the netherworld, and women on earth confused by the arrows of Kāma. One of pure mind who recites with complete devotion the lakṣmī-syllable, which is difficult for bad people to obtain, him the goddess of good fortune will always be eager to see, and although unsteady (by nature) she will remain at his doorstep out of devotion. [...]”.

Nāgakanyā (नागकन्या) refers to “Nāga girls”, according to the Vajratuṇḍasamayakalparāja, an ancient Buddhist ritual manual on agriculture from the 5th-century (or earlier), containing various instructions for the Sangha to provide agriculture-related services to laypeople including rain-making, weather control and crop protection.—Accordingly, [as the Bhagavān teaches various Nāga-enchantments], “[...] The image of five Nāga girls (nāgakanyā) should be placed in a secret place. Flowers and incense should be offered. It should be kept in a calm place, without having been perceived; nobody should be offered a sight of it. It should be covered with a clean cloth. If there is need, it should be struck with mustard seeds enchanted 108 times. It will accomplish all enterprises. [...]”

nāgakanyā (नागकन्या).—f (S) A fabulous race, or an individual of it, of females of serpentine extraction and very beautiful. 2 fig. A beautiful woman.

nāgakanyā (नागकन्या).—f A fabulous race, or an individual of it, of females of serpentine extraction and very beautiful. A beautiful woman.

19. Rules relating to the Tripuṇḍra < [Chapter 2 - Greatness of Bhasma and Dhāraṇa]

Chapter V - Account of the Seven religions of Patala, below the earth < [Book II]

Secular and Religious Figurines and Motifs in Jain Art < [Chapter 5]