Manjushri means something in Buddhism, Pali, Hinduism, Sanskrit. If you want to know the exact meaning, history, etymology or English translation of this term then check out the descriptions on this page. Add your comment or reference to a book if you want to contribute to this summary article.

The Sanskrit term Mañjuśrī can be transliterated into English as Manjusri or Manjushri, using the IAST transliteration scheme (?). 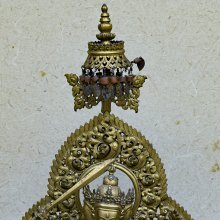 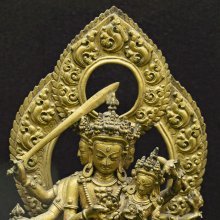 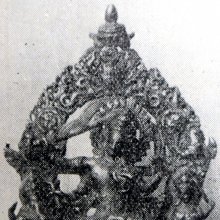 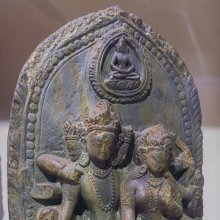 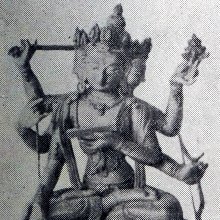 Mañjuśrī (मञ्जुश्री) is one of the pravrajita (monastic) Bodhisattvas accompanying the Buddha at Rājagṛha on the Gṛdhrakūṭaparvata, mentioned in a list of twenty-two in to Mahāprajñāpāramitāśāstra chapter 13.—They were at the head of countless thousands of koṭinayuta of Bodhisattva-mahāsattvas who were all still awaiting succession and will still accede to Buddhahood. He is also known as Wen chou che li or Miao tö .

Mañjuśrī is mentioned as a Bodhisattva of the Padmāvatī universe in chapter XV.—Accordingly, “the universe Houa tsi (Padmāvati) has been mentioned which belongs to the Buddha P’ou houa (Samantakusuma), where the Bodhisattva Miao tö (Mañjuśrī), the Bodhisattva Chan tchou yi (Susthitamati) and other very powerful Bodhisattvas dwell”.

Mañjuśrī is mentioned as a Bodhisattva who is praised by the Buddhas, according to chapter XLVII.—Accordingly, “the Buddhas praise these Bodhisattvas. Who are they? They are, for example, Wen-chou-che-li (Mañjuśrī), P’i-mo-lo-kie (Vimalakīrti), Kouan-che-yin (Avalokiteśvara), Ta-che-tche (Mahāsthāmaprāpta), Pien-ki (Samantabhadra). These leaders among the Bodhisattvas appear in the threefold world (traidhātuka), create for themselves innumerable bodies by transformation, enter into saṃsāra and convert beings. From such exploits (adbhuta) comes the entire very profound prajñāpāramitā”.

Mañjuśrī is a name of Mañjuśrī (the embodiement of non-dual knowledge) and, together with other names, forms the core essence of the Mañjuśrīnāmasaṃgīti. The Nāmamantrārthāvalokinī provides the practitioner a sādhana (‘meditative practice’) to turn these names into mantras. These mantras are chanted for the benefit of all beings, and then placed and contemplated in the Vajradhātu-mahāmaṇḍala, which is an extended version of the Vajradhātu-maṇḍala.

Mañjuśrī (मञ्जुश्री) is the name of a Bodhisattva commonly depicted in Buddhist Iconography, and mentioned in the 11th-century Niṣpannayogāvalī of Mahāpaṇḍita Abhayākara.—his color is golden; his symbol is the sword and book.—Like Avalokiteśvara Mañjuśrī is worshipped in all Buddhist countries and has a variety of forms. Mañjuśrī has several names such as Mañjuvajra, Mañjughoṣa, Dharmadhātuvāgīśvara and so forth. Next to Avalokiteśvara, Mañjuśrī is important in the Buddhist pantheon as the God of Learning with the sword for destroying ignorance and the book of transcendental wisdom, His images are numerous, and the Chinese collection presents no less than five different statuettes showing his great popularity in China.

In the Mañjuvajra-maṇḍala Mañjuśrī comes as a Bodhisattva in the third circle of deities surrounding the principal god Mañjuvajra who is represented along with his Prajñā or female counterpart. According to Niṣpannayogāvalī, Mañjuśrī should have the same form as the principal deity but he should have no Prajñā.

“Manjusri is three-faced, with the three faces of yellow, blue and white colour. He is endowed with six arms; in his three right hands he holds the sword, Varada-mudrā and the arrow, and in the three left shows the Prajñāpāramitā book, the blue lotus and the bow”.

Mañjuśrī (मञ्जुश्री) refers to the fifth of the “eight Bodhisattvas” (aṣṭabodhisattva) as defined in the Dharma-saṃgraha (section 12). The Dharma-samgraha (Dharmasangraha) is an extensive glossary of Buddhist technical terms in Sanskrit (e.g., aṣṭa-bodhisattva and Mañjuśrī). The work is attributed to Nagarguna who lived around the 2nd century A.D.

Source: The Art of Asia: Who is Who in HeavenManjusri (Chinese: Wen shu; Japanese: Monju), Bodhisattva of Wisdom, believed to have been a disciple of Shakyamuni. With Samantabhadra, he represents the two elemental aspects of Buddhism: Wisdom and Compassio n. He is often depicted holding a sword and/or a lotus, and seated on a lion.Source: Shambala Publications: General

Mañjushrī Skt. (Jap., Monju), lit., “He Who Is Noble and Gentle”; the bodhisattva of wis­dom, one of the most important figures of the Buddhist pantheon. He first appears in the Ārya-mañjushrī-mūlakalpa, a work dating from before the 4th century. Usually Mañjushrī is iconographically depicted with two lotus blossoms at the level of his head, on which his attributes—a sword and a book of the prajñāpāramitā literature—are placed. These attributes stand for the wisdom embodied by Mañjushrī, which dispels the darkness of ignorance.

Mañjuśrī is a Sanskrit compound consisting of the terms mañju and śrī (श्री).

Mañjuśrī (मञ्जुश्री):—[=mañju-śrī] [from mañju > mañj] m. Name of one of the most celebrated Bodhisattvas among the northern Buddhists, [Monier-Williams’ Buddhism 195 etc.]

Chapter 5 - The Consolation of the Invalid

Chapter 8 - The Family of the Tathágatas