Mahasthamaprapta means something in Buddhism, Pali, Hinduism, Sanskrit. If you want to know the exact meaning, history, etymology or English translation of this term then check out the descriptions on this page. Add your comment or reference to a book if you want to contribute to this summary article. 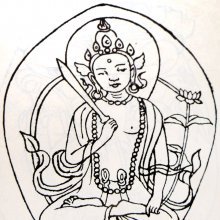 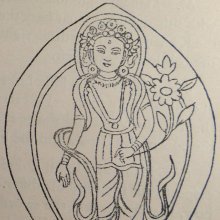 1) Mahāsthāmaprāpta (महास्थामप्राप्त) (“one who has obtained great strength”) is the name of a Bodhisattva commonly depicted in Buddhist Iconography, and mentioned in the 11th-century Niṣpannayogāvalī of Mahāpaṇḍita Abhayākara.—his color is white or yellow; his symbol is six lotuses or sword.

The names of the 108 deities [viz., Mahāsthāmaprāpta] possbily originate from a Tantra included in the Kagyur which is named “the 108 names of Avalokiteshvara”, however it is not yet certain that this is the source for the Nepali descriptions.

Mahāsthāmaprāpta (महास्थामप्राप्त) is the name of a Bodhisattva who is praised by the Buddhas, according to the 2nd century Mahāprajñāpāramitāśāstra chapter XLVII.—Accordingly, “the Buddhas praise these Bodhisattvas. Who are they? They are, for example, Wen-chou-che-li (Mañjuśrī), P’i-mo-lo-kie (Vimalakīrti), Kouan-che-yin (Avalokiteśvara), Ta-che-tche (Mahāsthāmaprāpta), Pien-ki (Samantabhadra). These leaders among the Bodhisattvas appear in the threefold world (traidhātuka), create for themselves innumerable bodies by transformation, enter into saṃsāra and convert beings. From such exploits (adbhuta) comes the entire very profound prajñāpāramitā”.

[«previous (M) next»] — Mahasthamaprapta in Buddhism glossary
Source: The Art of Asia: Who is Who in HeavenMahasthamaprapta (Chinese: Shih chih; Japanese: Seishi) Bodhisattva of Extreme StrengthSource: WikiPedia: Buddhism

Mahāsthāmaprāpta is a bodhisattva mahāsattva that represents the power of wisdom, often depicted in a trinity with Amitābha and Avalokiteśvara (Guanyin), especially in Pure Land Buddhism. His name literally means "arrival of the great strength".

Mahāsthāmaprāpta is one of the Eight Great Bodhisattvas in Mahāyāna Buddhism. He is also one of the Japanese Thirteen Buddhas in Shingon. He is one of the oldest bodhisattvas and is regarded as powerful, especially in the Pure Land school.

In Chinese Buddhism, he is usually portrayed as a woman, (similar to Avalokiteśvara)
In Tibetan Buddhism (Tantrism), he is equated with Vajrapani,.