Mahamantranusarini means something in Buddhism, Pali, Hinduism, Sanskrit. If you want to know the exact meaning, history, etymology or English translation of this term then check out the descriptions on this page. Add your comment or reference to a book if you want to contribute to this summary article. 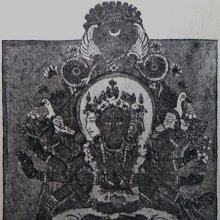 1) Mahāmantrānusāriṇī (महामन्त्रानुसारिणी) refers to one of the female emanations of Akṣobhya, as mentioned in the 5th-century Sādhanamālā (a collection of sādhana texts that contain detailed instructions for rituals).—Her Colour is blue; her Mudrā is varada; she has four arms.—The remarks made in the case of Mahāśītavatī, an emanation of Amitābha and one of the Pañcarakṣā goddesses, apply to the case of Mahāmantrānusāriṇī also. This goddess is another of the Pañcarakṣā goddesses, and as her colour is blue, she affiliates herself to the family of the Dhyāni Buddha Akṣobhya. Only one short sādhana describes her form.

The Dhyāna (meditation instructions) of Mahāmantrānusāriṇī described in the Sādhanamālā as follows:—

“Mahāmantrānusāriṇī is four-armed and one-faced, is blue in complexion, shows in her two right hands, the vajra and the varadamudrā and in her two left the paraśu and the noose. She originates from the syllable “Hūṃ”. bears the image of Akṣobhya on the crown, sits on and glows like the sun”

2) Mahāmantrānusāriṇī (महामन्त्रानुसारिणी) refers to one of the five Protector Goddesses (Rakṣa or Pañcarakṣa), commonly depicted in Buddhist Iconography, and mentioned in the 11th-century Niṣpannayogāvalī of Mahāpaṇḍita Abhayākara.—Her Colour is blue; her Symbol is the vajra; she has three faces and twelve arms. Mahāmantrānusāriṇī was probably known in China under the title of Mantrānudhāriṇī.

“In the South on the orb of the sun over a double lotus there is Mahāmantrānusāriṇī with the halo of the sun. She sits in the vajraparyaṅka attitude and is blue in colour Her principal face is blue, the right is white and the left is red. She is twelve-armed. With one pair of hands she displays the 2. dharmocakra-mudrā. With another pair of hands she exhibits the 4. samādhi-mudrā. In the remaining four right hands she shows 5. the vajra, 6. the arrow, 7. the varada and 8, the abhaya-mudrās. The remaining four left hands exhibit 9. the tarjanī with the noose, 10. the bow, 11 the jewel and 12. the jar marked with a lotus”.

Mahāmantrānusāriṇī (महामन्त्रानुसारिणी) refers to the fourth of “five protections” (pañcarākṣa) classified as a dhāraṇī according to a 17th-century Sanskrit manuscript from Nepal .—The earliest evidence for texts grouped together as the “five great dhāraṇīs” comes from Tibetan catalogues around 800 CE. These scriptures include spells, enumerations of benefits and ritual instructions for use.