Lokuttara means something in Buddhism, Pali, Hinduism, Sanskrit, Marathi, Hindi. If you want to know the exact meaning, history, etymology or English translation of this term then check out the descriptions on this page. Add your comment or reference to a book if you want to contribute to this summary article.

Alternative spellings of this word include Lokottar. 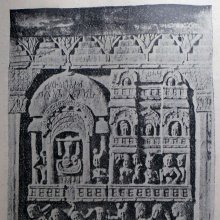 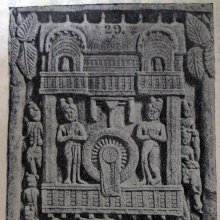 Lokottara (लोकोत्तर) or the Lokottaramārga refers to the “transcendental path”, according to the Vārāṇasīmāhātmya verse 1.116-125.—Accordingly, “[...] The gods, beginning with Brahmā, also proceed along the Laukikamārga. The God of gods, Virūpākṣa, who is established in the Lokottara-mārga [i.e., mārge lokottare sthitaḥ], proceeds beyond [the institutes of] sacrifice, giving and asceticism. But those sages who are on that path, delighting in the knowledge of the self, also proceed along the Lokottaramārga, abandoning their bodies. [...]”.

Lokuttara is beyond the world.

is a term for the 4 paths and 4 fruitions of sotāpatti, etc. (s. ariya-puggala), with Nibbāna as ninth.

Loka + Uttara = Lokuttara. Here Loka, means the five aggregates. Uttara means above, beyond or that which transcends. It is the supra mundane consciousness that enables one to transcend this world of mind body

1) Lokottara (लोकोत्तर) is the name of an Uṣṇīṣa king [i.e., Uṣṇīṣarāja] mentioned as attending the teachings in the 6th century Mañjuśrīmūlakalpa: one of the largest Kriyā Tantras devoted to Mañjuśrī (the Bodhisattva of wisdom) representing an encyclopedia of knowledge primarily concerned with ritualistic elements in Buddhism. The teachings in this text originate from Mañjuśrī and were taught to and by Buddha Śākyamuni in the presence of a large audience (including Lokottara).

[«previous (L) next»] — Lokuttara in Mahayana glossary
Source: academia.edu: A Study and Translation of the Gaganagañjaparipṛcchā

Lokottara (लोकोत्तर) refers to “transcendental (dharma)”, according to the Gaganagañjaparipṛcchā: the eighth chapter of the Mahāsaṃnipāta (a collection of Mahāyāna Buddhist Sūtras).—Accordingly, “How then, son of good family, is the Bodhisattva supported by the presence of the Buddha as unhindered and uninterrupted eloquence (pratibhāna)? Son of good family, there are the Bodhisattvas’ twenty-four sorts of eloquence. What are those twenty-four? [...] 18) eloquence adorned with the congregations of gods; 19) eloquence of cutting off all doubts; 20) eloquence of the mundane (laukika) and transcendental (lokottara) dharma; [...]”.

Note: lokuttara is a Pali compound consisting of the words loka and uttara.

Lokottara is a Sanskrit compound consisting of the terms loka and uttara (उत्तर).

Lokottara (लोकोत्तर).—[adjective] surpassing the world or what is common; unusual, extraordinary.

Lōkōttara (ಲೋಕೋತ್ತರ):—[adjective] excelling or surpassing the world; beyond what is common or general; unusual; extraordinary.

1) [noun] that which is extraordinary or uncommon.

2) [noun] a man who excels or surpasses all others of his class in the world; a man of extraordinary merit.

I. The essence of the perfections resides in the mind < [Part 1 - Obtaining easily an immense qualification]