Lasya means something in Buddhism, Pali, Hinduism, Sanskrit, Hindi. If you want to know the exact meaning, history, etymology or English translation of this term then check out the descriptions on this page. Add your comment or reference to a book if you want to contribute to this summary article.

Alternative spellings of this word include Lasy. 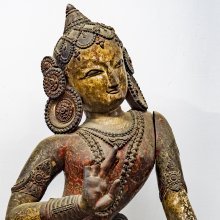 Lāsya (लास्य) refers to a “gentle form of dance”, in the form of a specific type of dramatic play (nāṭya) similar to that of the Bhāṇa type, according to the Nāṭyaśāstra chapter 20.

There are twelve types of the lāsya defined:

According to the Nāṭyaśāstra chapter 31, “it is said that the lāsya is so called because of its shining (lāsana). It relates to mutual attraction of men and women, and like the bhāṇa it is to be performed by one person, and its subject-matter also should be suitable”.

Lāsya (लास्य) is a gentle dance. The word lāsya is derived from the root ‘las’ meaning to play, to frolic. It is so called due to the mutual state of attraction between a woman and a man. Abhinava explains ‘lasana’ as ‘krīḍā’—the sportive state. It is the mutual jo ining of one’s mind with that of the other, i.e., the state of attraction of a wo man in regard to a man or of a man in regard to a woman.

Lāsyā (लास्या) refers one of four dance-deities, commonly depicted in Buddhist Iconography, and mentioned in the 11th-century Niṣpannayogāvalī of Mahāpaṇḍita Abhayākara.—Her Colour is red; her Symbol is lāsya dance; she has two arms.—All these four deities (viz., Lāsyā) are popular in the Vajrayāna pantheon and are described times without number both in the Sādhanamālā as well as in the Niṣpannayogāvalī.

Lāsyā (लास्या) is the name of a Ḍākinī who, together with the Vīra (hero) named Lāsya forms one of the 36 pairs situated in the Ākāśacakra, according to the 10th century Ḍākārṇava chapter 15. Accordingly, the ākāśacakra refers to one of the three divisions of the dharma-puṭa (‘dharma layer’), situated in the Herukamaṇḍala. The 36 pairs of Ḍākinīs [viz., Lāsyā] and Vīras are dark blue in color; they each have one face and four arms; they hold a skull bowl, a skull staff, a small drum, and a knife. Alternatively, the Ḍākinīs have their own marks and motions according to the taste instead of a small drum and a skull staff.

2) A dance accompanied with singing and instrumental music.

3) A dance in which the emotions of love are represented by means of various gesticulations and attitudes; अरुणाधरकिरणबालकिसलयलास्यहेतुभिः (aruṇādharakiraṇabālakisalayalāsyahetubhiḥ) Dk.2.5.

(-syaṃ) 1. Dancing in general. 2. Symphony, or union of song, dance, and instrumental music. 3. A mode of dance in which the emotions of love are represented mimically, the Nautch of India, or dance practised by women chiefly, and confined to attitude and gesticulation, with a shuffling motion of the feet seldom lifted from the ground; this style is said to have been invented by Parvati, and communicated by her to the daughter of Vanasura, by whom her female friends and companions were instructed in it; as a species, it is opposed to the Tandava, the most boisterous dance of Siva, and his followers or men. 4. A part or embellishment of dramatic composition, the occasional introduction of music and singing; also abrupt transition from Prakrita to Sanskrit and from Sanskrit to Prakrita, &c. m.

(-syā) A female dancer. E. las to be skilled in the art of dancing, ṇyat aff.

1) Lāsya (लास्य):—[from las] n. dancing, a dance ([especially] accompanied with instrumental music and singing), a dance representing the emotions of love dramatically (this was at one time a principal part of the drama, and as such [according to] to Bharata and the Daśa-rūpa consisted of 10 divisions or Aṅgas, viz. geya-pada, sthita-pāṭhya, āsīna, puṣpa-gaṇḍikā, pracchedaka, tri-gūḍha or tri-mūḍhaka, saindhava, dvigūḍhaka or vimūḍhaka, uttamottamaka, and ukta-pratyukta; including also a style of dramatic composition in which there is abrupt transition from Sanskṛt to Prākṛt and from Prākṛt to Sanskṛt; the term lāsya is also applied to the Nāch [Nautch] dance of the Indian dancing girls, consisting chiefly of gesticulation with a shuffling movement of the feet forwards and backwards, as invented by Pārvati and opposed to the boisterous masculine dance called Tāṇḍava practised by Śiva and his followers; cf. [Indian Wisdom, by Sir M. Monier-Williams 467]), [Mahābhārata; Kāvya literature] etc.

Search found 13 books and stories containing Lasya, Lāsya, Lāsyā; (plurals include: Lasyas, Lāsyas, Lāsyās). You can also click to the full overview containing English textual excerpts. Below are direct links for the most relevant articles: