Kushmanda means something in Buddhism, Pali, Hinduism, Sanskrit, Jainism, Prakrit, Marathi, biology. If you want to know the exact meaning, history, etymology or English translation of this term then check out the descriptions on this page. Add your comment or reference to a book if you want to contribute to this summary article.

The Sanskrit terms Kūṣmāṇḍa and Kuṣmāṇḍa and Kūṣmāṇḍā can be transliterated into English as Kusmanda or Kushmanda, using the IAST transliteration scheme (?). 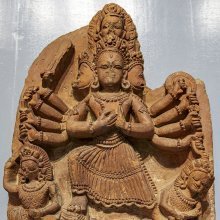 Kūṣmāṇḍa (चिर्भट) is a Sanskrit word referring to Benincasa hispida (ash gourd), a plant species in the Cucurbitaceae family. Certain plant parts of Kūṣmāṇḍa are eaten as a vegetable (śāka), according to Caraka in his Carakasaṃhitā sūtrasthāna (chapter 27), a classical Ayurvedic work. The plant is therefore part of the Śākavarga group of medicinal plants, referring to the “group of vegetables/pot-herbs”. Caraka defined such groups (vargas) based on the dietic value of the plant. The plant has the following botanical synonym: Benincasa cerifera.

Properties according to Caraka-saṃhitā: The ripe fruit of Kūṣmāṇḍa is alkaline, sweet, sour, light, diuretic, laxative and alleviates all doṣas.

Properties according to the Rājanighaṇṭu: It cures anuria, controls prameha (the obstinate urinary disorders, including diabetes), expels urinary stones and relieves dysuria. It makes the flow of urine and passing out of the stools easy. It overcomes the discomfort of the excessive thirst. It is health giving to the fatigued and worn out parts of the body. It is aphrodisiac, tasty, cures anorexia, gives strength and is anti-pitta.

Usage: Its young fruits are used as vegetable and the famous Pethā (sweets) is prepared out of ripe ones. This has a proved beneficial effect in amla-pitta (gastritis) and internal haemorrhages.

Kūṣmāṇḍa (कूष्माण्ड) refers to the “pumpkin gourd” and represents a type of vegetable, according to the Kāmasūtra IV.1.29, and is commonly found in literature dealing with the topics of dietetics and culinary art, also known as Pākaśāstra or Pākakalā.—From the Kāmasūtra, it appears that kūṣmāṇḍa (pumpkin gourd), āluka (an esculent root), palaṃki (a pot herb), damanaka, āmrātaka, ervāruka (a kind of cucumber), trapusa (cucumber), bottle gourd and brinjal were in common use.

Kūśmāṇḍa (कूश्माण्ड) refers to the medicinal plant known as “Benincasa hispida (Thunb.) Cobn.” and is dealt with in the 15th-century Yogasārasaṅgraha (Yogasara-saṅgraha) by Vāsudeva: an unpublished Keralite work representing an Ayurvedic compendium of medicinal recipes. The Yogasārasaṃgraha [mentioning kūśmāṇḍa] deals with entire recipes in the route of administration, and thus deals with the knowledge of pharmacy (bhaiṣajya-kalpanā) which is a branch of pharmacology (dravyaguṇa).

Kūṣmāṇḍa (कूष्माण्ड, “pumpkin gourd”) refers to one of the fifty-six vināyakas located at Kāśī (Vārāṇasī), and forms part of a sacred pilgrimage (yātrā), described in the Kāśīkhaṇḍa (Skanda-purāṇa 4.2.57). He is also known as Kūṣmāṇḍavināyaka, Kūṣmāṇḍagaṇeśa and Kūṣmāṇḍavighneśa. These fifty-six vināyakas are positioned at the eight cardinal points in seven concentric circles (8x7). They center around a deity named Ḍhuṇḍhirāja (or Ḍhuṇḍhi-vināyaka) positioned near the Viśvanātha temple, which lies at the heart of Kāśī, near the Gaṅges. This arrangement symbolises the interconnecting relationship of the macrocosmos, the mesocosmos and the microcosmos.

Kūṣmāṇḍa is positioned in the Western corner of the second circle of the kāśī-maṇḍala. According to Rana Singh (source), his shrine is located at “near Chandishvara, Phulwaria village”. Worshippers of Kūṣmāṇḍa will benefit from his quality, which is defined as “checking disturbance and giving peace”. His coordinates are: Lat. 25.19667, Lon. 82.58084 (or, 25°11'48.0"N, 82°34'51.0"E) (Google maps)

Kūṣmāṇḍa, and the other vināyakas, are described in the Skandapurāṇa (the largest of the eighteen mahāpurāṇas). This book narrates the details and legends surrounding numerous holy pilgrimages (tīrtha-māhātmya) throughout India. It is composed of over 81,000 metrical verses with the core text dating from the before the 4th-century CE.

Kūṣmāṇḍa (कूष्माण्ड) refers to “gourd”, forming part of a common diet in ancient Kashmir (Kaśmīra) as mentioned in the Nīlamatapurāṇa.—Kūṣmāṇḍa is recommended as an offering for the sage Agastya (verse 743). Most of the references to the articles of diet occur in the Nīlamata in connection with the offerings made to the gods but it is not difficult to infer from them the food and drink of the common people because “what a man eats his gods eat”.

1) Kūṣmāṇḍa (कूष्माण्ड) refers to “pumpkin gourd”, as defined in the Śivapurāṇa 1.15. Accordingly, “a charitable gift given to a needy person yields the utmost benefit. If it is given after entreaties it yields only half the benefit. [...] The gift of pumpkin gourd (kūṣmāṇḍa) is conducive to nourishment”.

2) Kūṣmāṇḍa (कूष्माण्ड) refers to a group of deities who together with the nine Durgās participated in Vīrabhadra’s campaign against Dakṣa, according to the Śivapurāṇa 2.2.33. Accordingly, as Brahmā narrated to Nārada:—“Mahākālī went ahead for the destruction of Dakṣa accompanied by nine Durgās [...]. Eager in executing the command of Śiva, they accompanied the marching heroes—[viz., Kūṣmāṇḍa] and set out quickly for the destruction of Dakṣa’s sacrifice”.

1b) A sūkta of the Yajur Vedins to be recited in tank rituals.*

Kuṣmāṇḍā (कुष्माण्डा) refers to one of the nine Navadurgā which literally means the “nine forms of Goddess Durgā”, and constitute, according to Vedic scriptures, the manifestation of Durgā in Her nine different aspects. [...] Each goddess [viz., Kuṣmāṇḍā] has a different form and a special significance.

Kūṣmāṇḍa (कूष्माण्ड) refers to “pumpkin fruits” and is used in oblation offerings, according to verse 25.137-141a of the 8th-century Īśvarasaṃhitā. Accordingly, “... they [eg., kuṣmāṇḍa] are already cooked, filling the cooking vessels (sthālī) and dishes (śarāva) are to be kept in all broad frying vessels (ambarīṣa). They are to be placed on vessels (pātra) smeared with (within) ghee (ghṛta), are hot and are to be spread out there. They which are heated and made greasy with powdered peppers, jīraka and ghee are to be stirred again and again with ladle. They are to be kept in vessels covered with clothes etc”.

Kuṣmāṇḍa (कुष्माण्ड) refers to “squash” (a kind of vegetable), according to the Śrī Caitanya Caritāmṛta 2.3.44ff—Accordingly:—“[...] among the cooked vegetables were paṭolas, squash [viz., kuṣmāṇḍa], mānakacu and a salad made with pieces of ginger and various types of spinach. [...] Thus Lord Kṛṣṇa was offered all the food, and the Lord took it very pleasantly”

Kuṣmāṇḍa (कुष्माण्ड) refers to a group of deities summoned by the Yamāntaka-mantra and mentioned as attending the teachings in the 6th century Mañjuśrīmūlakalpa: one of the largest Kriyā Tantras devoted to Mañjuśrī (the Bodhisattva of wisdom) representing an encyclopedia of knowledge primarily concerned with ritualistic elements in Buddhism. The teachings in this text originate from Mañjuśrī and were taught to and by Buddha Śākyamuni in the presence of a large audience (including Kuṣmāṇḍa).

Kūṣmāṇḍa (कूष्माण्ड) refers to a class of piśāca deities according to both the Digambara and Śvetāmbara traditions of Jainism. The piśācas refer to a category of vyantaras gods which represents one of the four classes of celestial beings (devas).

The deities such as Kūṣmāṇḍas are defined in ancient Jain cosmological texts such as the Saṃgrahaṇīratna in the Śvetāmbara tradition or the Tiloyapaṇṇati by Yativṛṣabha (5th century) in the Digambara tradition.

Kūṣmāṇḍa (कूष्माण्ड) refers to one of the eight classes Vyantaras living in the first 100 yojanas of the Ratnaprabhā-earth in the “lower world” (adhaloka), according to chapter 2.2 [ajitanātha-caritra] of Hemacandra’s 11th century Triṣaṣṭiśalākāpuruṣacaritra (“lives of the 63 illustrious persons”): a Sanskrit epic poem narrating the history and legends of sixty-three important persons in Jainism.

2) An epithet of the wife of Śiva.

1) A kind of pumpkin gourd.

(-ṇḍaḥ) 1. One of a class of demigods attached to Siva. 2. State of the womb in gestation. f. (-ṇḍī) 1. A name of Durga. 2. A drug. A religious ceremony, a certain rite performed as a penance or expiation; also kuṣmāṇḍaka.

(-ṇḍaḥ) A kind of spirit or imp, of which there exists a Gana or class. f. (-ṇḍī) A name of Durga; also kuṣmāṇḍa and kūṣmāṇḍaka.

2) = bhrūṇāntara (a state of the womb in gestation, [Horace H. Wilson]), [cf. Lexicographers, esp. such as amarasiṃha, halāyudha, hemacandra, etc.]

3) [noun] another vine of the same family Cucurbita maxima.

3) [noun] another vine of the same family Cucurbita maxima.

Chapter 270 - A hymn to Viṣṇu that destroys Evil