Kshitigarbha means something in Buddhism, Pali, Hinduism, Sanskrit. If you want to know the exact meaning, history, etymology or English translation of this term then check out the descriptions on this page. Add your comment or reference to a book if you want to contribute to this summary article.

The Sanskrit term Kṣitigarbha can be transliterated into English as Ksitigarbha or Kshitigarbha, using the IAST transliteration scheme (?). 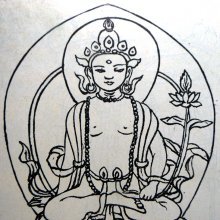 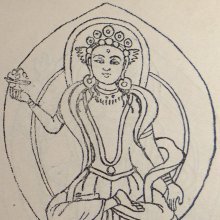 Kṣitigarbha (क्षितिगर्भ) is the name of a Bodhisattva mentioned as attending the teachings in the 6th century Mañjuśrīmūlakalpa: one of the largest Kriyā Tantras devoted to Mañjuśrī (the Bodhisattva of wisdom) representing an encyclopedia of knowledge primarily concerned with ritualistic elements in Buddhism. The teachings in this text originate from Mañjuśrī and were taught to and by Buddha Śākyamuni in the presence of a large audience (including Kṣitigarbha).

1) Kṣitigarbha (क्षितिगर्भ) (“matrix of the earth”) is the name of a Bodhisattva commonly depicted in Buddhist Iconography, and mentioned in the 11th-century Niṣpannayogāvalī of Mahāpaṇḍita Abhayākara.—His color is yellow or green; his symbol is the kalpa-tree or jar.—The third Bodhisattva Kṣitigarbha is rarely represented. He is described twice in the Niṣpannayogāvalī. In one, he is identical with his sire Vairocana with the Cakra symbol.

“Kṣitigarbha is yellow in colour, shows the earth-touching mudrā in the right hand, and a lotus with the wish-giving tree (kalpavṛkṣa) in the left”

“Kṣitigarbha is of green colour, and shows in his two hands the jar and the Abhaya-mudrā”.

The names of the 108 deities [viz., Kṣitigarbha] possbily originate from a Tantra included in the Kagyur which is named “the 108 names of Avalokiteshvara”, however it is not yet certain that this is the source for the Nepali descriptions.Source: Wisdomlib Libary: Vajrayogini

Kṣitigarbha (क्षितिगर्भ) is the name of a deity to be contemplated upon by a practicioner purifying his correspondences (viśuddhi), according to the 12th-century Abhisamayamañjarī. Kṣitigarbha is alternatively known by the name Mohavajra because he destroys ignorance (moha). The contemplation is prescribed as a preliminary ritual for a yogin wishing to establish, or reestablish the union with a deity.

Kṣitigarbha (क्षितिगर्भ) is the name of a Vīra (hero) who, together with the Ḍākinī named Kṣitigarbhī forms one of the 36 pairs situated in the Hṛdayacakra, according to the 10th century Ḍākārṇava chapter 15. Accordingly, the hṛdayacakra refers to one of the four divisions of the sahaja-puṭa (‘innate layer’), situated within the padma (lotus) in the middle of the Herukamaṇḍala. The 36 pairs of Ḍākinīs and Vīras [viz., Kṣitigarbha] are reddish yellow in color; they each have one face and four arms; they hold a skull bowl, a skull staff, a small drum, and a knife.

“If I do not go to the hell to help the suffering beings there, who else will go? ... if the hells are not empty I will not become a Buddha. Only when all living beings have been saved, will I attain Bodhi.” – Ksitigarbha Greatest Compassionate Vow

Ksitigarbha (kṣitigarbha) is a bodhisattva primarily revered in East Asian Buddhism, usually depicted as a Buddhist monk in the Orient. The name may be translated as "Earth Treasury", "Earth Store", "Earth Matrix", or "Earth Womb". Ksitigarbha is known for his vow to take responsibility for the instruction of all beings in the six worlds between the death of Gautama (Sakyamuni) Buddha and the rise of Maitreya Buddha, as well as his vow not to achieve Buddhahood until all hells are emptied.

Ksitigarbha is one of the four principal bodhisattvas in East Asian Mahayana Buddhism.

Usually depicted as a monk with a halo around his shaved head, he carries a staff to force open the gates of hell and a wish-fulfilling jewel to light up the darkness.

Kṣitigarbha (क्षितिगर्भ) refers to the seventh of the “eight Bodhisattvas” (aṣṭabodhisattva) as defined in the Dharma-saṃgraha (section 12). The Dharma-samgraha (Dharmasangraha) is an extensive glossary of Buddhist technical terms in Sanskrit (e.g., aṣṭa-bodhisattva and Kṣitigarbha). The work is attributed to Nagarguna who lived around the 2nd century A.D.

Source: Buddhist Door: GlossaryEarth Store Bodhisattva. He is now the guardian of the earth. Depicted with the alarum staff with its six rings, he is accredited with power over the hells and is devoted to the saving of all creatures between the Nirvana of Shakyamuni and the advent of Maitreya. He vows that while the hell is not empty, he will not attain Buddhahood. As his vow is the greatest, he is also known as The Great Vow Bodhisattva.Source: The Art of Asia: Who is Who in HeavenKsitigarbha (Chinese: Ti tsang; Japanese: Jizo) is worshipped as a savior to those condemned to the torments of hell. Since the 10th century, he as been portrayed as a young, itinerant monk who carries a pilgrims staff and a wish granting jewel. On a popular level, he is also believed to assist the wayward souls of deceased children.

Chapter 12 - The Benefit through Sight and Hearing

Chapter 2 - The Assembly of Innumerable Emanations of Ksitigarbha Bodhisattva

Sūtra of the Great Vow of Kṣitigarbha Bodhisattva

Chapter 10 - Comparing the Merit and Conditions for Dāna < [Scroll 2]

Part 2b.2 - The two individual explanations of shamatha and vipashyana < [B. The teaching of the three factors of immovable samadhis]