Kritanjali means something in Buddhism, Pali, Hinduism, Sanskrit, Marathi. If you want to know the exact meaning, history, etymology or English translation of this term then check out the descriptions on this page. Add your comment or reference to a book if you want to contribute to this summary article.

The Sanskrit term Kṛtañjalī can be transliterated into English as Krtanjali or Kritanjali, using the IAST transliteration scheme (?). 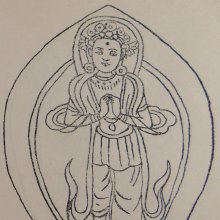 Kṛtañjalī (कृतञ्जली) is a Sanskrit word referring to Mimosa pudica, a herb from the Fabaceae (pea) family of flowering plants. English names include “sensitive plant” or “sleepy plant”. It is used throughout Ayurvedic literature such as the Caraka-saṃhitā and the Suśruta-saṃhitā.

This plant (Kṛtañjalī) is also possibly identified with Mūrvā, a medicinal used for the treatment of all major fevers (jvara), as described in the Jvaracikitsā (or “the treatment of fever”) which forms the first chapter of the Sanskrit work called Mādhavacikitsā.

The names of the 108 deities [viz., Kṛtāñjali] possbily originate from a Tantra included in the Kagyur which is named “the 108 names of Avalokiteshvara”, however it is not yet certain that this is the source for the Nepali descriptions.

kṛtāñjali (कृतांजलि).—a (S) Having placed the hollowed palms one over the other.

kṛtāñjalī (कृतांजली).—a Having placed the hollowed palms one over the other.

Kṛtāñjali (कृताञ्जलि).—mfn. (-liḥ-liḥ-li) One who joins the palms of the hands, making such a sign of reverence or solicitation, reverent, respectful. m.

1) Kṛtāñjali (कृताञ्जलि):—[from kṛta > kṛ] mfn. one who joins the hollowed palms in reverence or to solicit a favour (holding the hollowed palms together as if to receive alms or an offering), standing in a reverent or respectful posture, [Manu-smṛti; Mahābhārata; Rāmāyaṇa]

2) [v.s. ...] m. a shrub used in medicine and in magical potions, [cf. Lexicographers, esp. such as amarasiṃha, halāyudha, hemacandra, etc.]

Kṛtāñjali (कृताञ्जलि):—[kṛtā+ñjali] (liḥ-li) a. Joining the palms of the hands for making obeisance or holding water. m. A shrub used in medicine and in magical potions.

1) [noun] the hands joined together (as in reverence).

2) [noun] a man who has joined both the palms, expressing reverence, obeisance or supplication.

Chapter 302 - Description of different kinds of potential mantras and herbs

Act 9.2: Examination of the plurality of Buddha < [Chapter XV - The Arrival of the Bodhisattvas of the Ten Directions]