Kaushambi means something in Buddhism, Pali, Hinduism, Sanskrit, Jainism, Prakrit, the history of ancient India. If you want to know the exact meaning, history, etymology or English translation of this term then check out the descriptions on this page. Add your comment or reference to a book if you want to contribute to this summary article.

The Sanskrit terms Kauśāmbī and Kauśāmbi can be transliterated into English as Kausambi or Kaushambi, using the IAST transliteration scheme (?). 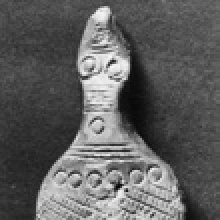 Kauśāmbī (कौशाम्बी).—Four sons, Kuśāmba, Kuśanābha, Asūrtarajas and Vasu were born to Kuśa, the son of Brahmā, of his wife the princess of Vidarbha. According to the order of their father each prince built a city and began to rule over it. Kauśāmbī is the city built by Kuśāmba.

Kuśanābha built the city of Mahodayapura; Asūrtarajas, the city of Dharmāraṇya and Vasu the city of Girivraja. (Vālmīki Rāmāyaṇa, Bāla Kāṇḍa, Sarga 32). It is mentioned in Kathāsaritsāgara that the city of Kauśāmbī stood in the middle of the kingdom of Vatsa and that Udayana born of the family of the Pāṇḍavas had once ruled this country with Kauśāmbī as his capital.

The capital of the ancient Indian kingdom of Vatsa, located on the Yamunā river near to its confluence with the Ganges. Like many major early Indian cities, it was located at the juncture of important trade routes. The Buddha Śākyamuni made several visits there and several early monastic precincts were established there during his lifetime. (Pāli = Kosambī).

Kauśāmbī (कौशाम्बी), capital of the Vatsas, today Kosam on the Jumna, 50 km. from Allahabad. It had several parks, Kukkuṭa and Ghositārāma, where the Buddha frequently stayed.

Kauśāmbī (कौशाम्बी) is the principal city in the kingdom of Vatsa. The brick-built fort of king Pradyota still exists. Udayana, son of Śatānīka, versed in the Gandharva lore (science and music) was the king of Vatsa. Here are many Jina images in the temples. Here many forests are watered by the Kālindī (Yamunā). Gandanavālā fasted here for about six months in honour of Mahāvīra. The city of Kauśāmbī is a great place, hallowed by the birth of Jina.

Kauśāmbī was the captial of the Vatsa kingdom. This city was built where existed the hermitage of king Kuśāmba. t was a well-known city in northern India. According to the Buddhist scholiast Buddhaghosa the city came to be called Kosambī or Kauśāmbī because in founding it the Kosamba trees were uprooted here and there.

Kauśāmbī (कौशाम्बी) is the birth-place of Padmaprabha, the sixth Tīrthaṅkara, according to chapter 1.6 [ādīśvara-caritra] of Hemacandra’s 11th century Triṣaṣṭiśalākāpuruṣacaritra (“lives of the 63 illustrious persons”): a Sanskrit epic poem narrating the history and legends of sixty-three important persons in Jainism.

Accordingly: “[...] In Bharata there will be twenty-three other Arhats and eleven other Cakrins. [...] In Kauśāmbī, Padmaprabha, the son of Dhara and Susīmā, red color, living for thirty lacs of pūrvas, two hundred and fifty bows tall, will be in the vow a lac of pūrvas less sixteen pūrvāṅgas, and the interval will be ninety thousand crores of sāgaras”.

Kauśāmbī (कौशाम्बी) is the name of a village visited by Mahāvīra during his eleventh year of spiritual-exertion.—Moving from Vraja village to Ālambhiyā, Śvetāmbikā, Sāvatthī, Kauśāmbī, Rājagṛha, Vārāṇasī, Mithilā, etc, the Lord arrived at Vaiśālī. Outside the city at the Baladeva temple in the Samara garden, accepting four-months fast, he became meditative and completed the rainy season halt there.

Kauśāmbī was also visited by Mahāvīra during his twelfth year of spiritual-exertion and during several of his years as Kevalī.

Kauśāmbī (कौशाम्बी).—The earliest mention of Kosambī is found in Kauśāmbī Pillar Edict of Aśoka. During the time of Aśoka, Kosambī, Skt. Kauśāmbī, was the headquarters of a province. The place is identical with Kosam, a village twenty-eight miles south-west of Allahabad and about eight miles to the south of Karari, the chief town of Karari paxgana in the Manjhanpur tahsil of the Allahabad district. The spade of archaeologist has uncovered the ruins of the city of Kauśāmbī, which lie at Kosam. above mentioned village. Among other things, eight inscriptions of the Magha dynasty come from the village of Kosam. Five Bandhogarh inscriptionsof the third century A.D. mention a merchant, who belongs to Kosambī. One of the Bharhut inscriptions also refers to the city of Kosamba, i.e., Kauśāmbī. The city of Kauśāmbī was an important shopping place of the persons travelling along the great trade route connecting Sāketa and Sāvatthi in the north with Patiṭhāna or Paithan on the bank of the Godāvarī in the south.

Kausāmbī (कौसाम्बी) or Kosambī was the ancient captial of Vatsa or Vaṃsa: one of the sixteen Mahājanapadas of the Majjhimadesa (Middle Country) of ancient India, as recorded in the Pāli Buddhist texts (detailing the geography of ancient India as it was known in to Early Buddhism).—The kingdom of the Vaṃsas or Vatsas is mentioned in the Aṅguttara Nikāya as one of the sixteen great countries of India. The capital of the country was Kausāmbī (Kosambī) identical with modern Kosam near Allahabad.

Part 2.2b - The Paurava Dynasty < [Chapter 3 - Historical aspects in the Matsyapurāṇa]

Part 2.1a - The Solar Dynasty < [Chapter 3 - Historical aspects in the Matsyapurāṇa]

Part 1 - Position of Sārnāth at the physical and cultural periphery of Vārāṇasī < [Chapter VII - Sārnāth: The Satellite Religious Centre]

Part 5 - Urban centres in South Bihar (a): Aṅga Circle < [Chapter I - The Case Study of Rājagṛha]