Kasturi means something in Hinduism, Sanskrit, the history of ancient India, Marathi, Hindi, biology. If you want to know the exact meaning, history, etymology or English translation of this term then check out the descriptions on this page. Add your comment or reference to a book if you want to contribute to this summary article. 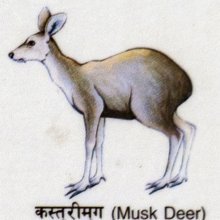 Kastūrī (कस्तूरी) refers to “musk”. It is used in Ayurvedic literature such as the Rasaprakāśasudhākara (Sanskrit book on rasaśāstra, or ‘Indian medicinal alchemy’).

Kastūri (कस्तूरि) refers to “musk” and is mentioned as one of the fruits used in the treatment of aggravated phlegm, according to the 17th century Bhojanakutūhala (dravyaguṇāguṇa-kathana), and is commonly found in literature dealing with the topics of dietetics and culinary art, also known as Pākaśāstra or Pākakalā.—Procedure to alleviate kapha (phlegm) after meals: The excess phlegm in the human body can lead to the weakening of digestive fire. Sleeping immediately after the meal will result in the aggravation of phlegm. The excess phlegm must be alleviated by employing fumes of the fragrant substances or consuming fruits [like kastūri (musk), ...]. After a meal, one must walk a few steps. Practising this lightens the food mass and imparts comfort in the neck, knees and loins. [...]

Kasturi (musk) refers to one of the various items used during the holy bath, as prescribed in Pancaratra literature in the Tamil tradition.—[Kasturi or Musk is usually placed on the forehead as tilaka before the pundra is applied]—Tirumanjanam or abhishekam or “the holy bath” is a picturesque ceremony in a Vishnu temple and forms an essential daily item in the worship. [...] Various items are used for bathing the deity [viz., kasturi], etc. After the bath is over, the images are dried with cloth and dressed with fine clothes and bedecked with ornaments and fresh garlands. A salad, with a mixture of fruits, coconut, honey (panchamirtham) and lemon juice (panagam) and betels, are offered to the deity and later distributed to the devotees.

Kastūrī (कस्तूरी) refers to “musk”, according to the 13th-century Matsyendrasaṃhitā: a Kubjikā-Tripurā oriented Tantric Yoga text of the Ṣaḍanvayaśāmbhava tradition from South India.—Accordingly, “[Visualisation of Śakti]:—[...] The tilaka-mark on her forehead is made with musk (kastūrī) thickened with camphor. She has lotus-eyes. She is adorned with rings, armlets, anklets, necklaces etc. Her beautiful lotus face resembles the spotless moon. Her mouth is filled with betel. Her breasts are like golden jars. [...]”.

Kastūrī (कस्तूरी) is the name of a Devī associated with Viṣṇu, according to the Netratantra of Kṣemarāja: a Śaiva text from the 9th century in which Śiva (Bhairava) teaches Pārvatī topics such as metaphysics, cosmology, and soteriology.—Accordingly, [verse 13.1-9, while describing the appearance and worship of Viṣṇu]—“Or, [the Mantrin] worships a very handsome, eight-armed, yellow Deva. [...] The goddesses Karpūrī, Candanī, Kastūrī, and Kuṅkumī stand at the cardinal directions, and have a similar form as the Deva. The Devīs grant the fruits of the desired siddhis. What more should be said here? [...]”.

Kasturi (“musk”) is one of the exogamous septs (divisions) among the Kammas (agriculturists and traders). The word Kamma in Telugu means the ear-ornament, such as is worn by women. The Razus, who now claim to be Kshatriyas, were probably descended from Kapus, Kammas, and Velamas.

Kastūrī (कस्तूरी).—f. (-rī) 1. Musk, the animal perfume so called, as brought from Kashmir, Napal, and western Asam or Bhutan, the latter is said to be the best. 2. A plant, (Hibiscus abelmoschus.) 3. Another plant, (Amaryllis zeylanica.) E. kas to go, and tūrac affix; its scent going or spreading; the deriv. is irr.; also kan being added kastūrikā and kasturikā as above.

1) [noun] a substance with a strong, penetrating odour, obtained from a small sac (musk bag) under the skin of the abdomen in the male musk deer; musk.

2) [noun] a subsect among agricultural community.

Verse 4.12.14 < [Chapter 12 - The Story of the Gopīs That In the Holi Festival Displayed Three Transcendental Virtues]

Verse 2.9.73 < [Chapter 9 - The Lord’s Twenty-One Hour Ecstasy and Descriptions of Śrīdhara and Other Devotees’ Characteristics]