Karya means something in Buddhism, Pali, Hinduism, Sanskrit, Jainism, Prakrit, the history of ancient India, Marathi, Hindi, biology. If you want to know the exact meaning, history, etymology or English translation of this term then check out the descriptions on this page. Add your comment or reference to a book if you want to contribute to this summary article.

Alternative spellings of this word include Kary. 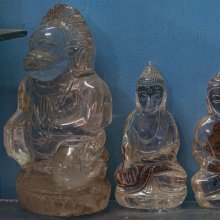 Kārya (कार्य, “action”) refers to one of the “five elements of the plot” (arthaprakṛti), according to the Nāṭyaśāstra chapter 21. These five elements represents the five means of attaining objects of the Plot (itivṛtta or vastu).

The associated ‘stage of action’ (avasthā) of kārya is the prārambha (beginning). These stages represent a Hero’s striving towards the object in a dramatic playwright (nāṭaka).

Kārya (कार्य).—One of the five elements of the plot (arthaprakṛti);—The efforts made for the purpose of the Principal Plot (ādhikārika) introduced in a play by the experts, is called the Action (kārya).

Kārya (कार्य):—The objective of physician to maintain the equilibrium of the body humors

Kārya (कार्य) refers to the “effect”, according to Utpaladeva’s Vivṛti on Īśvarapratyabhijñākārikā 1.5.6.—Accordingly, “[...] Only [the following] could [still] be objected: if these [objects] did not exist after as well as before [their] being manifest, [then] the very fact that they are manifest would be causeless, and [under such conditions,] the relation of cause and effect (kārya-kāraṇa-bhāva) and the relation between the knowing subject and the object of knowledge would not be possible”.

Kārya (कार्य) refers to the “purpose” (of Śakti), according to the Netratantra of Kṣemarāja: a Śaiva text from the 9th century in which Śiva (Bhairava) teaches Pārvatī topics such as metaphysics, cosmology, and soteriology.—Accordingly, [verse 21.6-9ab]—“But, if [mantras consist of] the forms of Śakti, whose Śakti and of what kind? O Deva, what [does] Śakti cause, what is her purpose (kārya), and of what kind is she? If [mantras] do not possess Śakti, what is worshipped with Śakti? Independence cannot be accomplished by anyone without perfection. [...]”.

[«previous (K) next»] — Karya in Mahayana glossary
Source: academia.edu: A Study and Translation of the Gaganagañjaparipṛcchā

1) Kārya (कार्य) refers to “effects”, according to the Gaganagañjaparipṛcchā: the eighth chapter of the Mahāsaṃnipāta (a collection of Mahāyāna Buddhist Sūtras).—Accordingly, “Then, in order to clarify this point further, the Lord went on to speak these verses: ‘(55) Enduring the fact that all dharmas are empty since there is no life (jīva), individual self (pudgala), or living being (satva), and not inconsistent with causes (hetu), conditions (pratyaya), and effects (kārya). Such is the most true and highest exposition of patience. [...]’”.

[«previous (K) next»] — Karya in Jainism glossary
Source: The University of Sydney: A study of the Twelve Reflections

Kārya (कार्य) refers to the “result (of the reflections)”, according to the 11th century Jñānārṇava, a treatise on Jain Yoga in roughly 2200 Sanskrit verses composed by Śubhacandra.—Accordingly, “[com.—Next he speaks about the result of the reflections (bhāvanākāryam)]—The fire of passion becomes extinguished, desire flows away, darkness disappears [and] the light of knowledge shines forth in the heart for men from the repetition of the reflections”.

Kārya.—cf. Tamil kāriyavārāycci (EI 24), name of a tax. Cf. Vāśal-kāriyam (SITI), the officer in charge of the palace gate; also known as Vāśal-mudali or Vāśal-nirvāham. Note: kārya is defined in the “Indian epigraphical glossary” as it can be found on ancient inscriptions commonly written in Sanskrit, Prakrit or Dravidian languages.

1) Karya in Niger is the name of a plant defined with Adenium obesum in various botanical sources. This page contains potential references in Ayurveda, modern medicine, and other folk traditions or local practices It has the synonym Cameraria obesa (Forssk.) Spreng. (among others).

2) Karya in Nigeria is also identified with Dalbergia hostilis It has the synonym Amerimnon hostile (Benth.) Kuntze (etc.).

If you are looking for specific details regarding Karya, for example side effects, diet and recipes, chemical composition, health benefits, extract dosage, pregnancy safety, have a look at these references.

kārya (कार्य).—n (S) A work or business; an affair or a matter; an act or a deed. 2 An effect. 3 A festal occasion. 4 In grammar. Variation of nouns, inflection. 5 A lawsuit. kārya urakaṇēṃ To perform sexual congress. kāryā- vara dṛṣṭi dēṇēṃ To keep an eye to one's business or object. kāryāsa lāvaṇēṃ To apply to its proper purpose.

4) A religious rite or performance.

9) An effect, the necessary result of a cause (opp. kāraṇa).

Kārya (कार्य).—[adjective] to be done etc. (v. 1 kṛ). [neuter] affair, duty, business, work, matter; lawsuit, dispute; an operation in grammar; effect, result; purpose, object. kiṃ kāryam to what purpose? na kāryamasmākam we have no business with or need of ([instrumental]).

5) to be caused to do, [Naiṣadha-carita]

13) an operation in grammar (e.g. sthāny-āśrayaṃ kāryam, an operation resting on the primitive form as opposed to the ādeśa, or substitute), [Kāśikā-vṛtti on Pāṇini]

17) the denouement of a drama, [Sāhitya-darpaṇa]

Kārya (कार्य) in the Sanskrit language is related to the Prakrit word: Kajja.

1) [adjective] that can be done, performed.

2) [adjective] fit to be done, performed.

1) [noun] physical or mental effort exerted to do or make something; purposeful activity; labour; toil; a work.

2) [noun] that which ought to be done; any action, task, etc. required by or relating to one’s occupation or position; duty.

3) [noun] an occasion of celebration.

4) [noun] anything brought about by a cause or agent; result; effect.

6) [noun] something aimed at or striven for; an objective.

7) [noun] the outcome, solution, unraveling or clarification of a plot in a drama, story, etc.; the denouement of a drama.

Search found 86 books and stories containing Karya, Kārya, Kāryā; (plurals include: Karyas, Kāryas, Kāryās). You can also click to the full overview containing English textual excerpts. Below are direct links for the most relevant articles:

7(b): Portrait of Different Classes Projected in Painting < [Chapter 5 - Painting and Image Making]

Verse 7.34 - The transgressions of Proṣadhopavāsa-vrata < [Chapter 7 - The Five Vows]