Kapata means something in Buddhism, Pali, Hinduism, Sanskrit, Marathi, Hindi. If you want to know the exact meaning, history, etymology or English translation of this term then check out the descriptions on this page. Add your comment or reference to a book if you want to contribute to this summary article.

Alternative spellings of this word include Kapat. 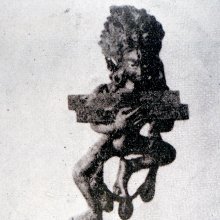 Kapaṭa (कपट, “deception”).—Subject-content of the first act of Samavakāra play;—Deception (kapaṭa) is known to be of three kinds, such as being due to a devised plan, accident or that [practised] by the enemy. It creates joy or sorrow [to persons].

Kapāṭa (कपाट) refers to a “door” (made from the ivory of wild elephants), according to Bāṇa’s Kādambarī (p. 224-228).—Accordingly, “[Going ahead a little, he then sees that the Goddess Caṇḍikā] was enclosed by a door (kapāṭa) made from the ivory of wild elephants, as yellowish-white as fragments of ketakī filaments, and an iron architrave bearing an ornamental garland of black iron mirrors surrounded by a row of red yak tail whisks resembling a garland of Śabara heads horrific with tawny hair”.

Kapāṭā (कपाटा) refers to a “door”, according to the Kaulajñānanirṇaya.—Accordingly, “The Nameless (energy) [i.e., anāmā] is fixed in the Heart [i.e., hṛdaya]. This is the Gesture (mudrā) that bestows the goddess. If one sees her in the End of the Twelve, she shines (like) a necklace of gems. This is the Gesture (mudrā) called Anāmā; once (it is) known (one attains) the (liberated) sky-faring state. O beloved, one must break though the door which, endowed with consciousness, is sealed with the Five Seals (of the lower Wheels) and is well obstructed by the chain (of the door [i.e., kapāṭā]). [...]”.

Kapāṭā (कपाटा) refers to one of the four “Door Goddesses”, as commonly depicted in Buddhist Iconography, and mentioned in the 11th-century Niṣpannayogāvalī of Mahāpaṇḍita Abhayākara.—Her Colour is red; her Symbol are the planks; she has two arms.—The third deity in the series of the four door goddesses is called Kapāṭā. [...] A statuette of this goddess is found in the Chinese collection under the title of Dvāradharā. The two are identical.

“Kapāṭā is of red colour and holds in her two hands the Door Planks”.

[Collectively they are described as nude, dancing in pratyālīḍha, with fearful appearance, and awe-inspiring ornaments. They are described below in the same order in which they are treated in the maṇḍala. They hold their special symbols appropriate to their names.]

-ṭī A measure equal to the capacity of the hollows of the two hands joined together.

Kapāṭa (कपाट).—in Lalitavistara 376.13 (verse), to be read approximately: nīvaraṇa-kapāṭāś ca pañca mayehā pradāritā sarve, perhaps all the five doors (gates, as obstacles) of the hindrances have been cleft by me here. Note however that AMg. kavāḍa = kapāṭa is a homonym of kavāḍa = kapāla; I suspect that the latter is really meant here (falsely Sktized), in some such sense as hard shells.

(-ṭaḥ-ṭaṃ) Fraud, deceit, cheating, circumvention. E. ka Brahma, paṭ to go, ac affix; what extends even to Brahma,; or ka the head, and paṭa a covering, screening the head as it were. f. (-ṭī) A measure equal to the capacity of the hollows of the two hands joined.

Kapaṭa (ಕಪಟ):—[noun] any of an order (Chiroptera) of furry, nocturnal flying mammals having membranous wings and navigating by echolocation and which feed on insects, nectar, fruit, flesh and blood; a chiropter; a bat.

1) [noun] the act of cheating, deceiving; the quality of a cheat; deception; fraud.

2) [noun] a pretending to be what one is not or to feel what one does not feel; hypocrisy.

Dhanañjaya on the ten types of drama < [Introduction]

Verse 3.3.368 < [Chapter 3 - Mahāprabhu’s Deliverance of Sarvabhauma, Exhibition of His Six-armed Form, and Journey to Bengal]

Verse 3.2.453 < [Chapter 2 - Description of the Lord’s Travel Through Bhuvaneśvara and Other Placesto Jagannātha Purī]