Kamatha means something in Hinduism, Sanskrit, Jainism, Prakrit, Marathi. If you want to know the exact meaning, history, etymology or English translation of this term then check out the descriptions on this page. Add your comment or reference to a book if you want to contribute to this summary article. 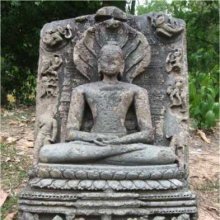 Kamaṭha (कमठ) is the name of an ascetic, as mentioned in the Vividhatīrthakalpa by Jinaprabhasūri (13th century A.D.): an ancient text devoted to various Jaina holy places (tīrthas).—Accordingly, “Curious when seeing the people carrying flowers, etc., Pārśvanātha goes to the places where the ascetic Kamaṭha practices the asceticism of the five fires. As he is in possession of the threefold knowledge, Pārśva knows that there is a great serpent in the piece of wood which is about to be burned. ”.—cf. Parsva.

Kamaṭha (कमठ) was hostile towards Pārśvanātha: the twenty-third of the twenty-four Tīrthaṅkaras praised in the first book (ādīśvara-caritra) [chapter 1] of Hemacandra’s 11th century Triṣaṣṭiśalākāpuruṣacaritra (“lives of the 63 illustrious persons”): a Sanskrit epic poem narrating the history and legends of sixty-three important persons in Jainism. Accordingly, “[...] may the Lord Pārśvanātha, whose attitude of mind was the same toward Kamaṭha and Dharaṇendra while each was performing actions characteristic of himself, be for your emancipation”.

Note: Kamaṭha was Pārśvanātha’s enemy and Dharaṇendra his friend, as the result of an incident in a former birth. See Bloomfield: Life and Stories of the Jaina Savior Pārśvanātha, pp. 9 ff.

-ṭhī A female tortoise or a small tortoise.

(-ṭhaḥ-ṭhaṃ) 1. A water jar, especially one made of a hollow gourd or cocoanut, and used by ascetics. m.

7) [v.s. ...] mn. a water-jar ([especially] one made of a hollow gourd or cocoa-nut, and used by ascetics), [cf. Lexicographers, esp. such as amarasiṃha, halāyudha, hemacandra, etc.]

1) [noun] any of a large and widely distributed order (Testudines) of terrestrial or aquatic reptiles having a toothless beak and a soft body encased in a tough shell into which the head, tail, and four legs may be withdrawn; a turtle; a tortoise.

2) [noun] (myth.) the second of the ten incarnations of Viṣṇu.