Kaikeyi means something in Hinduism, Sanskrit, Jainism, Prakrit, Marathi. If you want to know the exact meaning, history, etymology or English translation of this term then check out the descriptions on this page. Add your comment or reference to a book if you want to contribute to this summary article. 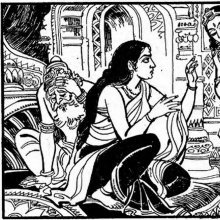 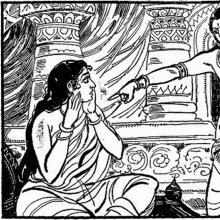 1) Kaikeyī (कैकेयी).—General information. One of the wives of Daśaratha, who had three wives, Kausalyā, Kaikeyī and Sumitrā. It is mentioned in Vālmīki Rāmāyaṇa, Ayodhyā Kāṇḍa, Sarga 70, Stanza 28 that Kaikeyī was the sister of Yudhājit, the King of Kekaya. Kekaya was seven days' journey away from Ayodhyā. (See full article at Story of Kaikeyī from the Puranic encyclopaedia by Vettam Mani)

Kaikeyī (कैकेयी) refers to the name of a Lady mentioned in the Mahābhārata (cf. ). Note: The Mahābhārata (mentioning Kaikeyī) is a Sanskrit epic poem consisting of 100,000 ślokas (metrical verses) and is over 2000 years old.

Kaikeyi is the second wife of King Dasharatha of Ayodhya. She gave birth to Bharata, as a result of partaking the sacrificial offering from the Ashwamedha sacrifice performed by her husband for the purpose of obtaining children.

Kaikeyī (कैकेयी): She was the youngest of King Dasaratha's three wives and a queen of Ayodhya. She was the mother of Bharata.

1) Kaikeyī (कैकेयी) is the mother of Nārāyaṇa: one of the nine black Vāsudevas, according to chapter 1.6 [ādīśvara-caritra] of Hemacandra’s 11th century Triṣaṣṭiśalākāpuruṣacaritra (“lives of the 63 illustrious persons”): a Sanskrit epic poem narrating the history and legends of sixty-three important persons in Jainism.—Accordingly: “[...] There will be nine black Vāsudevas, enjoyers of three parts of the earth, with half so much power as the Cakrins. [...] The son of Kaikeyī and Daśaratha, named Nārāyaṇa, in Rājagṛha, in the interval between Muni and Nami, living for twelve thousand years, sixteen bows tall, will go to the third hell at the end of his life”.

2) Kaikeyī (कैकेयी) refers to one of the wifes of Daśaratha, according to the Jain Ramayana and chapter 7.4 [Rāma and Lakṣmaṇa].—Accordingly, “[...] Though a child, ruling, King Daśaratha attained growth in age and strength gradually. [...] Daśaratha married in Kamalasaṅkula the daughter of Subandhutilaka and of Queen Mitrā, named Kaikeyī for a first name, with another name, Sumitrā, because she was born of Mitrā and was good-tempered, like the moon marrying Rohiṇī. [...]”.

3) Kaikeyī (कैकेयी) is the daughter of Pṛthvīśrī and king Śubhamati from Kautukamaṅgala, according to the Jain Ramayana and chapter 7.4.—Accordingly, “Maithila (Janaka) and Aikṣvāka (Daśaratha) wandering together, united, in the same condition, friends, went to the north country. They heard of a svayaṃvara of Kaikeyī, the daughter of King Śubhamati in the city Kautukamaṅgala, borne by Pṛthvīśrī, sister of Droṇamegha, a depository of the seventy-two arts, and they went to the pavilion. They sat down on the platform in the midst of the kings headed by Harivāhaṇa, like haṃsas on a lotus. [...]”.

kaikēyī (कैकेयी).—f (S) Proper name of the wife of janaka, or the stepmother of Rama. Hence, appellatively, a shrew, scold, virago.

Search found 22 books and stories containing Kaikeyi, Kaikeyī, Kaikēyī; (plurals include: Kaikeyis, Kaikeyīs, Kaikēyīs). You can also click to the full overview containing English textual excerpts. Below are direct links for the most relevant articles:

Part 8: Marriage with Kaikeyī < [Chapter IV - The, birth, marriage, and retreat to the forest of Rāma and Lakṣmaṇa]

Part 18: Question of the succession < [Chapter IV - The, birth, marriage, and retreat to the forest of Rāma and Lakṣmaṇa]

The Tale Of Ramayana