Jnanadakini means something in Buddhism, Pali. If you want to know the exact meaning, history, etymology or English translation of this term then check out the descriptions on this page. Add your comment or reference to a book if you want to contribute to this summary article. 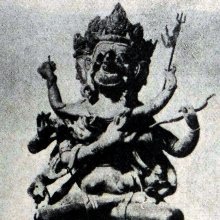 “Jnanadakini has a blue face... the right is white... the left is red and amorous... In the three right hands she carries the raised khaṭvāṅga, the axe and the vajra. In the three left there are the bell, the cup full of blood and the sword.”