Jina means something in Buddhism, Pali, Hinduism, Sanskrit, Jainism, Prakrit, the history of ancient India, Marathi, Hindi. If you want to know the exact meaning, history, etymology or English translation of this term then check out the descriptions on this page. Add your comment or reference to a book if you want to contribute to this summary article.

Alternative spellings of this word include Gene. 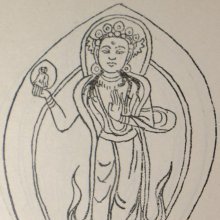 Jina (जिन) represents the number 24 (twenty-four) in the “word-numeral system” (bhūtasaṃkhyā), which was used in Sanskrit texts dealing with astronomy, mathematics, metrics, as well as in the dates of inscriptions and manuscripts in ancient Indian literature.—A system of expressing numbers by means of words arranged as in the place-value notation was developed and perfected in India in the early centuries of the Christian era. In this system the numerals [e.g., 24—jina] are expressed by names of things, beings or concepts, which, naturally or in accordance with the teaching of the Śāstras, connote numbers.

[«previous (J) next»] — Jina in Mahayana glossary
Source: academia.edu: A Study and Translation of the Gaganagañjaparipṛcchā

Jīna (जीन) refers to the “victorious one”, according to the Gaganagañjaparipṛcchā: the eighth chapter of the Mahāsaṃnipāta (a collection of Mahāyāna Buddhist Sūtras).—Accordingly, “[...] The Bodhisattva Gaganagañja then sustained the jewel-canopy of ten thousand yojanas high over the Lord’s lion throne in the sky, joined the palms of his hands, saluted, and praised the Lord with these suitable verses: ‘[...] (2) Victorious One (jīna) whose absolute body (dharmakāya) is the same as the manifested (prabhāvita) body, displayed his beautiful body (abhirūpa) as endowed with well-shaped forms (surūpa), having produced (prajanita) compassion (karuṇā) that brings benefits for living beings, reveals the supreme body which has the marks of hundredfold merits (śatapuṇya-lakṣaṇa). [...]’”.

Jina (जिन) refers to a “victor”, according to the Guru Mandala Worship (maṇḍalārcana) ritual often performed in combination with the Cakrasaṃvara Samādhi, which refers to the primary pūjā and sādhanā practice of Newah Mahāyāna-Vajrayāna Buddhists in Nepal.—Accordingly, “In praise (of) Śrī Vajrasattva, highest universal guru, origin of all Buddhas, By various forms, removing darkness and fear, fixed resting on Meru. Dharma sustainer, chief sage, most fortunate victor (jina-vara-subhagaṃ), Vajradhātu mandala, In one form with all bliss, innate bliss, embodied, the cause for liberation”.

Jina.—same as Tīrthaṅkara. (IE 7-1-2), ‘twentyfour’. (LL), an epithet of the Buddha. Note: jina is defined in the “Indian epigraphical glossary” as it can be found on ancient inscriptions commonly written in Sanskrit, Prakrit or Dravidian languages.

Jina (जिन) was once with reference to Buddha and Buddhism, according to “A Cultural note on the Kuvalayamala of Uddyotanasuri” by the late Dr. V. s. Agrawala.—The Kuvalayamala (779 A.D.) is full of cultural material which gains in value because of the firm date of its composition. [...] During the 7th century, in the writings of Bāṇa, the terms Jina, Jinendra, Jinanātha and Jaina were used with reference to Buddha and Buddhism, and the same is the case in the Amarakośa and the Lalitavistara, etc. It is an open question as to when for the first time the word Jaina was used in its present meaning.

jina (जिन).—m S The generic name of the personage peculiar to the jaina sect. 2 A generic name applied to the chief saints of the baudhda sect.

-naḥ 1 A generic term applied to a chief Bauddha or Jaina saint.

2) N. applied to the Arhats of the Jainas.

(-naḥ) 1. A Jina, the generic name of the personage peculiar to the Jaina sect, who is ranked by them as superior to the gods of the other sects: a saint and teacher: twenty-four Jinas are supposed to flourish in an Avasarpini or Jaina age, and their writers enumerate those of the ages past, present, and to come. 2. A Bud'dha; a generic term applied to the chief saints of the Bud'dha sect, in the same manner as to those of the Jainas. 3. A name of Vishnu. 4. A very old man. 5. A sage, one who is omniscient. E. ji to conquer or excel, nak Unadi aff.

3) an Arhat (or chief saint of the Jainas; 24 Jinas are supposed to flourish in each of the 3 Avasarpiṇīs, being born in Āryāvarta), [Jaina literature; Pañcatantra v, 1, 10/11 ff.; Varāha-mihira’s Bṛhat-saṃhitā lx; Sarvadarśana-saṃgraha]

Jina (जिन) in the Sanskrit language is related to the Prakrit word: Jiṇa.

1) Jiṇa (जिण) in the Prakrit language is related to the Sanskrit word: Jina.

1) [noun] that which is small in size; a little thing.

2) [noun] (Jain.) any of the twenty four recognised spiritual teachers.

4) [noun] he who has subdued his worldly passions.

6) [noun] a symbol for the number twenty-four.

Jīna (ಜೀನ):—[noun] a greedy, stingy man who hoards money for its own sake, even at the expense of personal comfort; a miser.

Jīna (ಜೀನ):—[noun] a religion founded in the 6th century B.C. as a revolt against the then prevalent Hinduism and emphasising the perfectibility of human nature and liberation of the soul, esp. through asceticism and non-violence toward all living creatures; Jainism.