Janman means something in Hinduism, Sanskrit, Jainism, Prakrit, Marathi, Hindi. If you want to know the exact meaning, history, etymology or English translation of this term then check out the descriptions on this page. Add your comment or reference to a book if you want to contribute to this summary article. 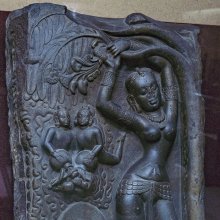 Janman (जन्मन्) refers to a “bed slab”. When a temple is built over a sheet of bedrock, a ‘bed slab’ (janman) is placed over the upper contour of the bedrock. This is done only after the rock itself is cut and dressed in order to make it uniformly flat.

Janman (जन्मन्) refers to “rebirths”, according to the Kālī teachings of Abhinava’s Jayadrathayāmala.—Accordingly, “That energy (called) Kuṇḍalinī resides in the Secret Wheel (in the genitals). O fair lady, that place which fulfils all desires should always be kept secret. Then (it is called) Guhyā (the Hidden One) and is always more secret than the secret. The nectar that comes out of this is hard to acquire by gods or demons. A thousand rebirths [i.e., janma] are destroyed in the Ocean of Kula [i.e., kulārṇava] of one who possesses it. [...] Amā, the energy of the (New) Moon is located in the Door of Brahmā. Pure water falls (from) there and, having fallen into the heart of Kuṇḍalī, the nectar which is the juice of Kuṇḍalī comes out of his body. By just eating this, (Yogis) become immortal and free of old age, wrinkles, white hair and all diseases.”.

Janman (जन्मन्) refers to “nativity” (in the science of horoscopy), according to the Bṛhatsaṃhitā (chapter 1), an encyclopedic Sanskrit work written by Varāhamihira mainly focusing on the science of ancient Indian astronomy astronomy (Jyotiṣa).—Accordingly, “[...] In my work on Astronomy, I have treated of the rising and setting of the planets as well as their retrograde and reretrograde motions and the like. In my work on Horoscopy, I have fully treated of nativity [i.e., janman], of yātrā and of marriage. In the present treatise, I have rejected questions and re-questions, historical narrations, unimportant planetary phenomena and all that is useless; and my purpose is to speak clearly only of the vital truths of the several subjects treated of”.

Janman (जन्मन्) refers to “[future] birth”, according to Kṣemarāja’s commentary on the Svacchandatantra verse 4.142b.—Accordingly, “For the purpose of supernatural powers, from the past pure and impure [karma] that maintains the [current] body he should only purify the impure [portion] for him, for in this way (evam) the achievement of enjoyment comes about without any obstacles. As for the pure and impure [karma] that is accumulated in other [past] births and which he will do in a [future] birth (janman), all those should be purified for him according to the proclaimed procedure, like in the case of the Putraka, apart from [those karmas for] the propitiation of mantras. Therefore he said, [prākkarmāgāmi caikasthaṃ bhāvayitvā ca dīkṣayet (Svacchanda 4.142cd)]”.

[«previous (J) next»] — Janman in Jainism glossary
Source: Encyclopedia of Jainism: Tattvartha Sutra 2: the Category of the living

Janman (जन्मन्, “birth”).—How many types of birth (janman, method of getting born) are there? There are three types namely spontaneous generation (sammūrchina), uterus/womb (garbha) and by descent-in-the-special-bed (upapāda). What is the meaning of being born (birth)? Acquisition of the new body by the empirical soul is called birth or getting born.

Janman (जन्मन्) refers to an “existence”, according to the 11th century Jñānārṇava, a treatise on Jain Yoga in roughly 2200 Sanskrit verses composed by Śubhacandra.—Accordingly, “[This self] whose intention is confounded by the poison of manifestly false knowledge, desire and so forth falls into an existence that is difficult to endure (janman-durgama), inflamed by the fire of endless suffering”.

Janma (जन्म).—m n Birth or production. Life-time. In comp. From birth or throughout life. Ex. janmakaraṇṭā janmakhōḍa. janma ghēṇēṃ Draw birth, come into existenee. janma jāṇēṃ Spend one's life (idly or vainly). janma dēṇēṃ Give birth to, bear. janmācā khōṭā A liar from the mother's womb. janmā- cā rōgī Sickly from birth. janmācā rōga An inherited or a connate disease. janmācā jōḍā or sōbatī A companion for life: viz. a husband, wife, firm friend, incurable malady. janmācī bēgamī A pro- vision or stock for life. janmācī bhākara A provision or maintenance for life. janmācēṃ sārthaka The end, purpose, object of one's existence. janmācē karmīṃ As, or in the manner of, one of those acts which are never repeated in life. Used adverbially in construction with nouns expressing actions either singular or of extremely infrequent occurrence. janmāsa ghālaṇēṃ Bring into ex- istence. janmāsa yēṇēṃ Come into being. janmācā patkara ghēṇēṃ To take upon oneself the charge (of feeding, clothing, providing for, or of doing anything) for the life-time of. janmācī āṭhavaṇa rāhaṇēṃ To remember as long as one lives. navā janma hōṇēṃ To obtain a new birth.

8) (In astr.) Name of the first mansion or Nakṣatra.

11) The people of a household.

-adhipaḥ 1 an epithet of Śiva.

-kīlaḥ an epithet of Viṣṇu.

-kuṇḍalī a diagram in a horoscope in which the positions of different planets at the time of one's birth are marked.

-nāman n. the name received on the 12th day after birth.

-paḥ the regent of a planet under which a person is born.

-rogin a. sickly from birth.

-lagnam, -rāśiḥ the sign of the zodiac under which a person is born.

Janman (जन्मन्) in the Sanskrit language is related to the Prakrit word: Jamma.

1) [noun] the act, fact or an instance of being born; birth.

2) [noun] the duration of a person’s life (sometimes, including the condition of living, activities of life etc.).

3) [noun] ಜನ್ಮ ಕೊಡು [janma kodu] janma koḍu to bear or bring forth an offspring; to give birth to.

Search found 70 books and stories containing Janman, Janma; (plurals include: Janmans, Janmas). You can also click to the full overview containing English textual excerpts. Below are direct links for the most relevant articles:

Chapter 14 - The bases of columns (adhiṣṭhāna)

Chapter 13 - The pedestals for columns (upapīṭha)