Janita means something in Hinduism, Sanskrit, Buddhism, Pali, Marathi, Hindi. If you want to know the exact meaning, history, etymology or English translation of this term then check out the descriptions on this page. Add your comment or reference to a book if you want to contribute to this summary article.

Alternative spellings of this word include Janit. 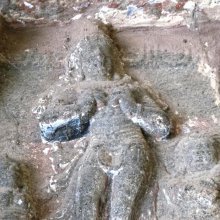 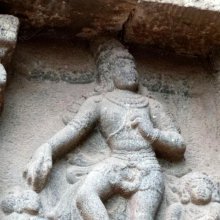 1) Janita (जनित).—One of the 108 karaṇas (minor dance movement) mentioned in the Nāṭyaśāstra chapter 4. The instructions for this janita-karaṇa is as follows, “one hand to be on the chest, the other hanging loosely and observing Talāgrasaṃsthitā (Janitā) Cārī.”.

2) Janitā (जनिता) refers to a one of the thirty-two cārīs, according to the Nāṭyaśāstra chapter 11. The Janitā-cārī is classified as a bhaumī, or “earthly”, of which there are sixteen in total. The term cārī  refers to a “dance-step” and refers to the simultaneous movement of the feet (pāda), shanks (jaṅghā) and the hip (ūru). From these cārīs proceed dance as well as movements in general.

Janita (जनित) refers to the “commencement” (of an eclipse), according to the Bṛhatsaṃhitā (chapter 5), an encyclopedic Sanskrit work written by Varāhamihira mainly focusing on the science of ancient Indian astronomy astronomy (Jyotiṣa).—Accordingly, “If there should be both lunar and solar eclipses in one month, princes will suffer both from dissensions among their own army and from wars. [...] These evil effects, resulting from planetary look at eclipsed disc, apply as well to the time of termination of the eclipse as to its commencement [i.e., graha-janita]. If Jupiter, a beneficent planet, should also see the eclipsed disc, the evils described will vanish in just the same way as the flame of fire dies out when water is poured over it”.

Janita (जनित) refers to the “arising (of inference)” according to the Utpaladeva’s Vivṛti on Īśvarapratyabhijñākārikā 1.5.8-9.—Accordingly, “For inference is a concept, and this [concept] arises thanks to the residual trace [left by] a previous experience; so to begin with, [it] depends on the fact that the object was directly perceived [at some point] in the past, and inference is a conceptual cognition that arises as an unfailing (avyabhicāra-janita) [means of knowledge] with respect to this [previously perceived] object. [...]”.

Janita (जनित) in the Sanskrit language is related to the Prakrit word: Jaṇia.

Janita (ಜನಿತ):—[adjective] that has come into existence; brought into life or being; born; produced; generated; begotten.

1) [noun] the act or fact of coming into life or of being born; birth.

2) [noun] (dance.) one of the one-hundred-eight coordinated movements of hands and feet.

3) [noun] (dance.) one of the sixteen movements on the ground.

Search found 22 books and stories containing Janita, Janitā; (plurals include: Janitas, Janitās). You can also click to the full overview containing English textual excerpts. Below are direct links for the most relevant articles:

Chapter 4.37 - Minor animals in the Epics