Janasthana means something in Hinduism, Sanskrit, Marathi. If you want to know the exact meaning, history, etymology or English translation of this term then check out the descriptions on this page. Add your comment or reference to a book if you want to contribute to this summary article. 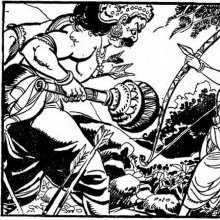 Janasthāna (जनस्थान).—This is a part of the forest Daṇḍaka, which lies in the basin of the Godāvarī. Śrī Rāma had lived in this forest with Sītā and Lakṣmaṇa for a long time during the period of his forest-life. It was at this place that Śrī Rāma killed fourteen thousand Rākṣasas (giants) such as Khara Dūṣaṇa, Triśiras and others. (Mahābhārata Dākṣiṇātya Pāṭha, Sabhā Parva, Chapter 38). Mārīca allured Sītā and Rāvaṇa kidnapped her in this place. (Mahābhārata Vana Parva, Chapter 147). Śūrpaṇakhā tried to attract Śrī Rāma and Lakṣmaṇa, and her nose etc, were cut off, in this forest. It was in this place that Śrī Rāma cut off the head of a Rākṣasa (demon) and threw it away. That head fell in the lap of a hermit called Mahodara. (Mahābhārata Śalya Parva, Chapter 39). Janasthāna is regarded as a holy place. It is mentioned in Mahābhārata, Anuśāsana Parva, Chapter 25, Stanza 29, that those who stay in this place and take bath in the Godāvarī will acquire imperial prosperity.

Janasthāna (जनस्थान).—Here Rāma vanquished a host of Rākṣasas;1 and performed the work of gods.2

Janasthāna is a Sanskrit compound consisting of the terms jana and sthāna (स्थान).

(-naṃ) The forest Dandaka, (in the Deccan) the eastern part. of it. E. jana a world, and sthān a place; the resort of a world of demons.

Janasthāna is a Sanskrit compound consisting of the terms jana and sthāna (स्थान).

Janasthāna (जनस्थान).—[neuter] [Name] of a part of the Dandaka forest.

Chapter 3 - The Story of Jaḍa