Jambavan means something in Hinduism, Sanskrit, Jainism, Prakrit. If you want to know the exact meaning, history, etymology or English translation of this term then check out the descriptions on this page. Add your comment or reference to a book if you want to contribute to this summary article. 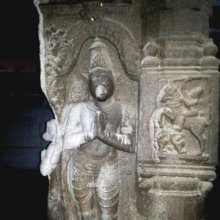 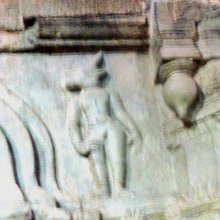 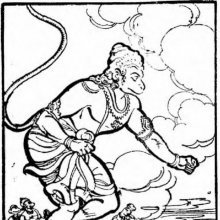 Jāmbavān (जाम्बवान्) refers to:—The chief of monkeys, also known as the chief of bears. He fought for Śrī Rāmacandra in the battle against the demon Rāvana. He fought against Śrī Kṛṣṇa for the Syamantaka jewel, and upon his defeat, presented the Lord with his daughter, the beautiful Jāmbavatī. (cf. Glossary page from Śrī Bṛhad-bhāgavatāmṛta).

Jāmbavān (जाम्बवान्).—A monkey of extraordinary might. He was the minister of Sugrīva.* Birth. When the troubles and hardships caused by the wickedness of Rāvaṇa became unbearable the goddess Earth and the Devas approached Brahmā for redress. Brahmā took them to the sea of Milk. Mahāvisṇu heard everything and said that he would incarnate as the son of Daśaratha and would kill Rāvaṇa. Brahmā was directed to create monkeys to help him on that occasion. Accordingly Brahmā created Jāmbavān and several other monkeys. There are two stories about the birth of Jāmbavān in the Purāṇas. (See full article at Story of Jāmbavān from the Puranic encyclopaedia by Vettam Mani)

Jāmbavān (जाम्बवान्).—(Ṛkṣa)—the son of Rakṣā and Prajāpati (also Jāmbavat)—The Lord of Ṛkṣas who celebrated Vāmana's victory over Bali.1 The same person is said to have been an ally of Rāma.2 Killed the lion that killed Prasena (s.v.) and took the syamantaka (s.v.) to his child. Kṛṣṇa and his citizens traced the footsteps of Prasena, which led them to the cave of Jāmbavān. Kṛṣṇa fought with the latter for twenty-eight days Jāmbavān acknowledged his defeat and praised Hari. He bestowed his daughter Jāmbavatī and the jewel on Kṛṣṇa.3 Attained salvation by satsaṅga;4 present at Rāma's abhiṣeka.5

Jāmbavān (जाम्‍बवान): Jambavan or Jamvanta is a bear in Hinduism and believe to lived from Treta Yuga to Dvapara Yuga.

Jāmbavān (जाम्बवान्) participated in the war between Rāma and Rāvaṇa, on the side of the latter, as mentioned in Svayambhūdeva’s Paumacariu (Padmacarita, Paumacariya or Rāmāyaṇapurāṇa) chapter 57ff. Svayambhū or Svayambhūdeva (8th or 9th century) was a Jain householder who probably lived in Karnataka. His work recounts the popular Rāma story as known from the older work Rāmāyaṇa (written by Vālmīki). Various chapters [mentioning Jāmbavān] are dedicated to the humongous battle whose armies (known as akṣauhiṇīs) consisted of millions of soldiers, horses and elephants, etc.

Search found 15 books and stories containing Jambavan, Jāmbavān; (plurals include: Jambavans, Jāmbavāns). You can also click to the full overview containing English textual excerpts. Below are direct links for the most relevant articles: