Jaliniprabha means something in Buddhism, Pali, Hinduism, Sanskrit. If you want to know the exact meaning, history, etymology or English translation of this term then check out the descriptions on this page. Add your comment or reference to a book if you want to contribute to this summary article. 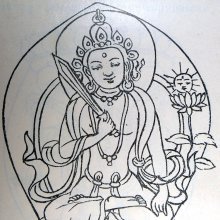 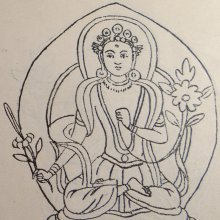 Jālinīprabha is a name of Mañjuśrī (the embodiement of non-dual knowledge) and, together with other names, forms the core essence of the Mañjuśrīnāmasaṃgīti. The Nāmamantrārthāvalokinī provides the practitioner a sādhana (‘meditative practice’) to turn these names into mantras. These mantras are chanted for the benefit of all beings, and then placed and contemplated in the Vajradhātu-mahāmaṇḍala, which is an extended version of the Vajradhātu-maṇḍala.

1) Jālinīprabha (जालिनीप्रभ) (“light of the sun”) is the name of a Bodhisattva commonly depicted in Buddhist Iconography, and mentioned in the 11th-century Niṣpannayogāvalī of Mahāpaṇḍita Abhayākara.—his color is red; his symbol is the sun-disc. Jālinīprabha is also known by the name of Sūryaprabha.

“Jālinīprabha also is one-faced and two-armed and sits in the Vajraparyaṅka attitude on a lotus. He holds the sword on a lotus in his right hand and the stem of a lotus against his chest with his left”.

The names of the 108 deities [viz., Jālinīprabha] possbily originate from a Tantra included in the Kagyur which is named “the 108 names of Avalokiteshvara”, however it is not yet certain that this is the source for the Nepali descriptions.

Search found 3 books and stories containing Jaliniprabha, Jālinīprabha; (plurals include: Jaliniprabhas, Jālinīprabhas). You can also click to the full overview containing English textual excerpts. Below are direct links for the most relevant articles: