Jalasaya means something in Hinduism, Sanskrit, Buddhism, Pali, the history of ancient India, Marathi, Hindi, biology. If you want to know the exact meaning, history, etymology or English translation of this term then check out the descriptions on this page. Add your comment or reference to a book if you want to contribute to this summary article.

The Sanskrit term Jalaśaya can be transliterated into English as Jalasaya or Jalashaya, using the IAST transliteration scheme (?).

Alternative spellings of this word include Jalashay. 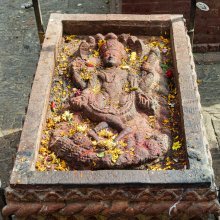 Jalāśayā (जलाशया) is another name for Guṇḍālā an unidentified medicinal plant, possibly identified with Bacopa monnieri from the Plantaginaceae or ‘plantain’ family [previously the Scrophulariaceae or ‘figwort’ family], according to verse 5.128 of the 13th-century Raj Nighantu or Rājanighaṇṭu. The fifth chapter (parpaṭādi-varga) of this book enumerates sixty varieties of smaller plants (kṣudra-kṣupa). Together with the names Jalāśayā and Guṇḍālā, there are a total of four Sanskrit synonyms identified for this plant.

Jalāśaya (जलाशय) refers to “lakes”, according to the Śivapurāṇa 2.3.32 (“The seven celestial sages arrive”).—Accordingly, as the Seven Sages said amongst each other (when arriving at Himavatpura city): “[...] The splendour of festoons is also seen in every house. They are of different colours and sorts with shapes of parrots and swans carved on the walls of the palaces. The canopies with hanging festoons are of diverse character. There are many lakes (jalāśaya) and ponds. The gardens and parks are of various kinds frequented by delighted people. Here men are like gods and the women are like the celestial damsels. [...]”.

Jal-āśaya.—(IE 7-1-2), ‘four’; see sāgara. Note: jal-āśaya is defined in the “Indian epigraphical glossary” as it can be found on ancient inscriptions commonly written in Sanskrit, Prakrit or Dravidian languages.

Jalashaya in India is the name of a plant defined with Vetiveria zizanioides in various botanical sources. This page contains potential references in Ayurveda, modern medicine, and other folk traditions or local practices It has the synonym Andropogon squarrosus auct. (among others).

If you are looking for specific details regarding Jalashaya, for example side effects, chemical composition, diet and recipes, pregnancy safety, extract dosage, health benefits, have a look at these references.

1) resting or lying in water.

4) the fragrant root of a plant (uśīra).

(-yaḥ) Vishnu. E. jala water, and śaya who sleeps; he is supposed to sleep borne by his serpent couch above the ocean, during the four months of the periodical rains in India; also during the intervals of the submersion of the world. jale śete śī-ac . 7 ta0 sa0 .

1) Jalaśaya (जलशय):—[=jala-śaya] [from jala] m. ‘reposing on water (id est. on his serpent-couch above the waters, during the 4 months of the periodical rains and during the intervals of the submersion of the world)’, Viṣṇu, [cf. Lexicographers, esp. such as amarasiṃha, halāyudha, hemacandra, etc.]

1) [noun] a place where water is collected and stored in large quantity; a natural or artificial lake, pond, etc.; a reservoir.

2) [noun] the grass Vetiveria zizanioides (= Andropogon muricatus) of Poaceae family, whose fragrant roots are used in making hand-fans and also for cooling screens for the windows; cus cus grass.