Jala means something in Hinduism, Sanskrit, Jainism, Prakrit, Buddhism, Pali, the history of ancient India, Marathi. If you want to know the exact meaning, history, etymology or English translation of this term then check out the descriptions on this page. Add your comment or reference to a book if you want to contribute to this summary article.

The Sanskrit term Jaḷa can be transliterated into English as Jala or Jalia, using the IAST transliteration scheme (?). 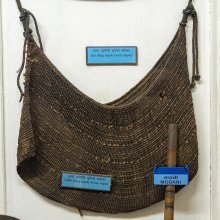 Water (जल, jala) is one of the five primary elements (pañcabhūta) forming the basic components of the world, according to Vāstu-śāstra literature. It is because of the presence and balance of these five elements that our planet thrives with life.

1) Jala (जल).—A deity of water. In Mahābhārata, Sabhā Parva, Chapter 11, Stanza 20 it is mentioned that this deva was a luminary in the durbar of Brahmā.

2) Jalā (जला).—A tributary of river Jamunā. The King Uśīnara performed a yāga (sacrifice) on the bank of this river and attained a position higher than Indra. (Mahābhārata Vana Parva, Chapter 13, Stanza 21).

Jala (जल).—As a deity with its adhīdevata Bhava; worshipped in founding a new temple.*

Jalā (जला) is the name of a meter belonging to the Gāyatrī class of Dhruvā (songs) described in the Nāṭyaśāstra chapter 32:—“the metre which has in its feet of six syllables the first four and the last one long, is jalā”.

Jalā (जला) refers to one of the twenty-four names of the Lāmās, according to the 8th-centry Jayadratha-yāmala.—While describing the special practices of the Lāmās mentions the special language to be used with them. This language is described as monosyllabic (ekākṣara-samullāpa) and may thus be considered to have belonged to the Sino-Tibetan family as the Lamas themselves belonged to the Tibetan group of mystics. The Lāmās [viz., Jalā], according to this language, had 24 different names.

Jala (जल) refers to “water” according to the 17th century Bhojanakutūhala (dravyaguṇāguṇa-kathana), and is commonly found in literature dealing with the topics of dietetics and culinary art, also known as Pākaśāstra or Pākakalā.—Different types of water (jala) and their properties are mentioned here [viz., in jala-prakaraṇa]. The water is classified into two as celestial and terrestrial ones. Celestial waters are again subdivided into four types, rain water (dhārāja), hailstone water (karakābhava), fog water (tauṣāra) and snow water (haima). Terrestrial waters are classified into three as forest originated (jāṅgala), marshy land water (ānūpa) and other varieties (sādhāraṇa).

The text explains the qualities of the water of certain important rivers [...]. It is interesting to note that the properties of boiled water based on the fuel used to boil the same are described. The fuels discussed here are bhallātaka (marking-nut tree), palāśa (Butea frondosa), jambu (roseapple), badari (Jujuba tree), khadira (acacia catechu), kadamba (Eugenia racemosa) and dhātri (gooseberry).

In the Jala or “water” group of foodstuffs, the following substances are beneficial (hita) to the body: Divya (rain water).

Jāla (जाल) is a Sanskrit word referring to (as an adjective) “watery”.

Jala (जल) is the name of a country classified as Hādi (a type of Tantrik division), according to the 13th century Sammoha-tantra (fol. 7).—There are ample evidences to prove that the zone of heterodox Tantras went far beyond the natural limits of India. [...] The zones in the Sammoha-tantra [viz., Jala] are here fixed according to two different Tantrik modes, known as Kādi and Hādi.

Jāla (जाल) refers to one of the twenty-two fishing methods applied by Saurikadatta, according to the Vipākasūtra (or, Vivāgasuya). Fishing was carried on by a certain class of people to earn their livlihood in ancient India. The fishermen (macchabandhā / matsyabandha) went out to the rivers and ponds early in the morning for fishing with their fishing hooks and nets. This occupation was carried on a large scale by some rich personswho engaged hired labour for fishing. Fish (matsya) was an important food of a large section of the people.

The methods (eg., Jāla) included roaming in the river on the boat and catching fishes by filtering water through a cloth, by different kinds of nets, by ropes, by diverting water through small water courses, catching fishes in muds, etc. The fishes were brought on boats, piled up at some place on the river side and sent to different places for sale. A large quantity of them were dried up, presumably for being preserved for sometime.

Jala (जल).—One of the five types of retentions (dhāraṇā) of saṃsthānavicaya (contemplation of objects of structure of the universe);—What is meant by water (jala) retention? After the air retention contemplate that the area above the brain is covered with a thick shield of clouds. It has started drizzles as large water droplets all over you. This washes away even the stains left behind by the ashes of karmas and body particles leaving behind just pure and clean soul. This is called water retention.

Jala (जल, “water”), Ap or Āpas refers to one of the five types of immobile beings (sthāvara), according to the 2nd-century Tattvārthasūtra 2.13. The sthāvara is a type of empirical (saṃsārī) soul, or sentient (jīva). The state of empirical souls due to the rise of ‘stationery-body-making karma’/ sthāvara-nāmakarma, having only one type of sense organ namely body and which cannot move around freely are called with stationery bodies (sthāvara), eg., jala.

Jala (जल) is the name of a king belonging to the line of Yadu (the yādavas), according to the Praśasti (eulogy or panegyric) of the temple of Lakkhā Maṇḍal at Maḍhā in the Jaunsār Bāwar district on the Upper Jamnā. Accordingly, the yādava kings of the lunar race (candravaṃśa) had ruled over the Siṅghapura country “since the beginning of the Yuga”.

The father of Jala was named Siṅghavarman, while his son was named Yajñavarman whose own son was named Acalavarman (or Achalavarman). Accordingly, “His son was he who is named the illustrious Jala, a prince whose peculiar action was the filling of the regions (with his fame), who removed the torments of his people, and who rained water (as it were) for (quenching) the forest-fire of the Kaliyuga. His son was the king named the illustrious Yajñavarman, by whom the peacocks were ever made to cry aloud on account of the smoke-clouds (arising) from the sacrificial butter”.

The Praśasti (600-800 AD) was composed by Bhaṭṭa Vasudeva and incised in the stone by the mason Īśvaraṇāga. It records the dedication of a temple of Śiva by a princess, Īśvarā, who belonged to the royal race of Siṅghapura, for the spiritual welfare of her deceased husband. The latter, called Śrī-Candragupta, was the son of a king of Jālandhara. The greater part of the inscription is taken up by an account of the ancestors.

Jala.—cf. sa-jala-sthala (IE 8-5); the waters [in a village]. (IE 7-1-2), used in the sense of jaladhi to indicate ‘four’. Note: jala is defined in the “Indian epigraphical glossary” as it can be found on ancient inscriptions commonly written in Sanskrit, Prakrit or Dravidian languages.

Jāla.—(Ep. Ind., Vol. XIV, p. 309), cf. Sanskrit jālaka, ‘a bunch of buds’; a load. Note: jāla is defined in the “Indian epigraphical glossary” as it can be found on ancient inscriptions commonly written in Sanskrit, Prakrit or Dravidian languages.

jala (जल).—n (S) Water. Pr. jalānta rāhūna māśāṃsīṃ vaira. jalīṃ sthalīṃ kāṣṭīṃ pāṣāṇīṃ (In water, in space, in wood, in stone.) Used primarily of the Deity; and hence of one who has a finger in every one's dish, or of one whom you meet at every turn.

jaḷa (जळ).—f (jaḷaṇēṃ) Waste (of metals, butter, wax &c.) on being melted or heated. 2 The soot at the bottom of pots, crock. 3 m fig. Anger, passion, wrath. 4 Spirit (in a bad sense); proudness of spirit, stout-heartedness, contumaciousness, indomitable resisting and burning against.

jaḷa (जळ).—n (jala S) Water. For the compounds with this word see those with jala.

jaḷa (जळ).—f The lath or slip which covers the junction-line of two planks in a flooring.

jaḷa (जळ).—n Water. m Anger. f Waste on being heated or melted. The soot at bottom of pots.

2) A kind of fragrant medicinal plant or perfume (hrīvera).

9) The membrane which unites the toes of many water-birds.

Jāla (जाल) or Jālaka.—nt., probably bouquet of flowers (here withered ones, to be removed from caityas); so jālaka is used in Sanskrit; the only plausible alternative would be spider-web, which jāla also means in Sanskrit (compare Schmidt, Nachträge) and Pali. In any case it means something the removal of which from caityas is a work of merit: yo jālakāni apanaye (so read with v.l. for Senart upanaye) cetiyeṣu Mv ii.391.3; choretva jālaṃ jinacetiyeṣu 391.22, repeated in the sequel; parallel Śikṣ 306.2, 4 choritva jālaṃ; 6, 8, 10 apanīya (ed. em. upa°) jālaṃ. On the passage, misunderstood by Senart and Bendall, see s.v. chorayati. In the immediately following verses, Mv ii.392.21 ff., Śikṣ 306.11 ff., the meritorious removal of withered flowers is unambiguously mentioned.

Appendix 7 - The webbed fingers of Buddha < [Chapter VIII - The Bodhisattvas]

Act 2: The Buddha smiles a second time with all the pores of his skin < [Chapter XIV - Emission of rays]