Indu means something in Hinduism, Sanskrit, the history of ancient India, Marathi, Jainism, Prakrit, Hindi. If you want to know the exact meaning, history, etymology or English translation of this term then check out the descriptions on this page. Add your comment or reference to a book if you want to contribute to this summary article. 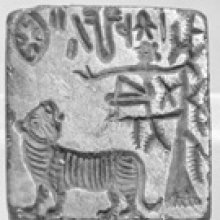 Indu (इन्दु) is a name mentioned in the Mahābhārata (cf. I.60.12) and represents one of the many proper names used for people and places. Note: The Mahābhārata (mentioning Indu) is a Sanskrit epic poem consisting of 100,000 ślokas (metrical verses) and is over 2000 years old.

Tradition makes Indu a pupil of Vāgbhaṭa, and his referring to the author of the Aṣṭāṅgahṛdayasaṃhitā simply as “Master” (Ācārya) seems to point in the same direction. What is more, a contemporary of Vāgbhaṭa by the name of Indu, or rather Indukara, is quite familiar to us; he is the father of Mādhavakara, the renowned author of the Mādhavanidāna, which can hardly have been written later than the 7th century. [...] Judging by the fact that he expressly defines Āndhra and Draviḍa as the names of two southern peoples or kingdoms and repeatedly mentions Kashmirian terms for particular plants, he is likely to have been a Northerner and a native of Kashmir.

Indu also wrote a commentary on the Aṣṭāṅgasaṃgraha, which bears the same title and follows the wording of the former wherever Aṣṭāṅgahṛdayasaṃhitā and Aṣṭāṅgasaṃgraha agree with each other. This work is frequently mentioned as “Indumatī” in Niścalakara’s Ratnaprabhā.

2) Indu (इन्दु) refers to the “moon”, as mentioned in verse 3.30 of the Aṣṭāṅgahṛdayasaṃhitā (Sūtrasthāna) by Vāgbhaṭa.—Accordingly, “[...] One shall eat rice (that is) white like jasmine and the moon [viz., indu], (together) with the meat of game. One shall drink broth (that is) not too thick, rasālā, curds, raga and khāṇḍava syrup, [...]”.

Indu (इन्दु) refers to the “moon (candra)”, according to the Bṛhatsaṃhitā (chapter 4), an encyclopedic Sanskrit work written by Varāhamihira mainly focusing on the science of ancient Indian astronomy astronomy (Jyotiṣa).—Accordingly, “The moon (candra) [i.e., indu] is always below (nearer to the Earth than) the sun. It is spherical in shape. One half of it is always illumined by the light of the sun, while the other half is dark owing to its own shadow, just like a pot placed in the sun. The rays of the sun falling on the watery moon remove the darkness of the night (on Earth) just in the same way as light reflected from a mirror (placed in the sun) removes the darkness (from) within a room”.

Indu (इन्दु) refers to “(white like the) moon”, according to the Śrīmatottara-tantra, an expansion of the Kubjikāmatatantra: the earliest popular and most authoritative Tantra of the Kubjikā cult. Accordingly, “O goddess, Svacchanda is in the middle, within the abode of the triangle. Very powerful, he has five faces with three times five flaming eyes. [...] Īśāna is the upper face. Both supreme and inferior, its nature is creation. (White) like snow, jasmine and the moon [i.e., hima-kunda-indu-saṃkāśa], it is stainless like pure crystal. It nourishes the entire universe with its moon rays as it rains in a great torrent a stream of nectar-like (bliss). Contemplating Īśāna (in this way) one attains (all eight) yogic powers. [...]”.

Indu.—(IE 7-12), ‘one’. Note: indu is defined in the “Indian epigraphical glossary” as it can be found on ancient inscriptions commonly written in Sanskrit, Prakrit or Dravidian languages.

[«previous (I) next»] — Indu in Marathi glossary
Source: DDSA: The Molesworth Marathi and English Dictionary

[«previous (I) next»] — Indu in Sanskrit glossary
Source: DDSA: The practical Sanskrit-English dictionary

1) The periodical changes of the moon.

2) a bright drop, a spark, [Taittirīya-saṃhitā]

4) m. [plural] (avas) the moons id est. the periodic changes of the moon

9) a symbolic expression for the number ‘one’

11) a coin, [cf. Lexicographers, esp. such as amarasiṃha, halāyudha, hemacandra, etc.] (In the Brāhmaṇas, indu is used only for the moon; but the connexion between the meanings ‘Soma juice’ and ‘moon’ in the word indu has led to the same two ideas being transferred in classical Sanskṛt to the word soma, although the latter has properly only the sense ‘Soma juice.’)

12) the weight of a silver Pala, [cf. Lexicographers, esp. such as amarasiṃha, halāyudha, hemacandra, etc.]

Indu (इन्दु) in the Sanskrit language is related to the Prakrit word: Iṃdu.

[«previous (I) next»] — Indu in Hindi glossary
Source: DDSA: A practical Hindi-English dictionary

Iṃdu (इंदु) in the Prakrit language is related to the Sanskrit word: Indu.

2) [noun] the present time or period.

Iṃdu (ಇಂದು):—[noun] the river in South Asia, rising in South West Tibet and flowing west across Jammu and Kashmir, India, then southwest through Pakistan into the Arabian Sea; the Sindhu river.

Chapter VII - Crossing Of The Indus

Chapter XIV - Death Of Hwuy-king In The Little Snowy Mountains